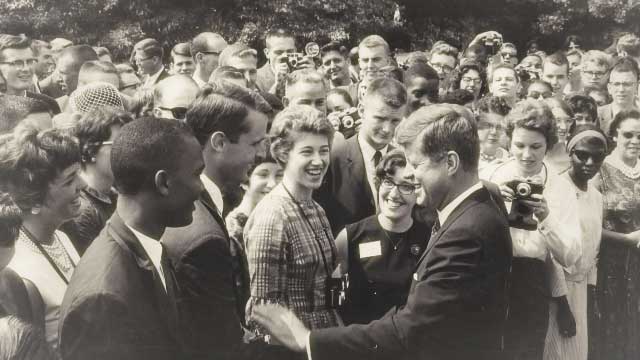 Set in a fictional southeast Asian country, United States diplomats made no effort to integrate into the communities they served while their Soviet counterparts learned the language and customs, allowing them to easily spread communism throughout the region. The film A Towering Task: The Story of the Peace Corps depicted the bestselling book as a cautionary tale, providing accounts which occurred during the Ronald Reagan era to make the connection. [Just switch the word communism for capitalism — and power.]

A Towering Task awakens viewers to what it means to be a global citizen. Directed by Alana DeJoseph and narrated by Annette Bening, the film was released in virtual theatrical runs across the nation, May 22.

In 1961, President John F. Kennedy gave young Americans the opportunity to serve their country in a new way by forming the Peace Corps. Now, more than 200,000 volunteers have traveled to more than 140 countries to carry out the organization’s mission of international cooperation.

Talk of proposals for a volunteer corps circulated in Kennedy’s presidential campaign. October 1960, after the third debate between Kennedy and Vice President Richard Nixon, Kennedy flew into Ann Arbor, Michigan. The senator connected well with young voters who, in trying to coax him, placed a mic outside the Michigan Union at the University of Michigan. In response to 10,000 gathered students, Kennedy asked:

Inspired to serve, graduate students Judy and Allen Guskin wrote a letter to the editor of the Michigan Daily pledging to work in countries where their help was needed. One month later, Kennedy won the election. To watch the footage ingrained in America’s consciousness as Kennedy delivers the challenge, “Ask not what your country can do for you; ask what you can do for your country,” it’s difficult not to ponder how different America may have been if not for the young leader’s tragic death. Upon his arrival to the White House, Kennedy received 25,000 letters from people volunteering for the Peace Corps.

Kennedy delegated the Peace Corps to his brother-in-law, diplomat, politician and activist Sargent Shriver, who devised and implemented a plan for the organization. Shriver travelled to countries discussing his plans and gauging people’s approval. He assembled a task force across many disciplines which was presented with a memorandum titled, A Towering Task, with the understanding that it had to be a massive effort or it wouldn’t make any impact.

“The Peace Corps was a product of relentless energy,” Shriver’s son and founder of the Special Olympics, Timothy Shriver said. “It took a fight.”

By weaving together personal volunteer experiences with the political machinations of the time, viewers gain a solid understanding of the Peace Corps — both its successes and mistakes. In many ways they jumped into the fire. The implementation of the agency was put on a fast track, causing uncertainty and questions from volunteers that couldn’t always be answered. Through improvising and problem-solving they experienced successes in areas including farming practices and teaching English. Peace Corps volunteers and those they served shared allegiance and affection in kind and people’s desire for the volunteers to stay remained constant.

Archival materials of Vietnam, protest demonstrations and the strife happening around the world through the first decade and a half of the agency’s life provides a backdrop utterly relatable to today. Footage by cinematographer Vanessa Carr from around the globe brings to life an agency that represents to the world the American ideal.

However, rapid growth and a disillusioned public during the Vietnam War soon had the agency fighting to exist. The Peace Corps found an unlikely champion in President Ronald Reagan — only after public thanks from a representative of a country which was helped by Peace Corps volunteers. With an unexpected revival, Reagan appointed Loret Miller Ruppe [U.S. Ambassador to Norway] as agency director — who advocated, undercover, for it to become an independent agency.

Upon the Peace Corps’ 60th anniversary, more than 200,000 volunteers have served in more than 140 countries. At the start of 2020, more than 7,300 Americans of all ages were serving their country and seeking to understand their place in the global community.

In response to COVID-19, and for the first time ever, the Peace Corps has evacuated all volunteers. The future of the agency is in question. Volunteers work at the forefront of some of the most pressing issues facing the global community. Yet, the agency has struggled to remain relevant amid sociopolitical change. Between COVID-19, a rise in nationalism and deep cuts to governmental-agency budgets, the Peace Corps is again confronting a crisis of identity. As the world travails these challenges and reevaluates how to cooperate together, A Towering Task serves as a reminder of Kennedy’s call to action and the evidential need for its recommencement today.