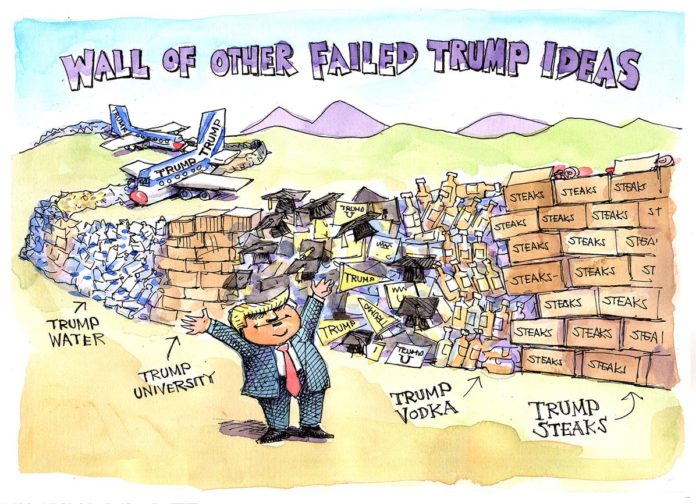 Build a wall to protect the truth

I’ve been thinking lately that perhaps America should build a wall like Donald J. Trump suggests, just not where he envisions it or for the reason he proposes. He can even have his signature brand on it to remind Americans and all future presidents just what not to do.

It shouldn’t be built on the southern border as we have seen that such a wall wouldn’t have been able to keep out the invading COVID-19 pandemic nor the influx of asymptomatic arrivals of foreigners at our international airports. Rather that wall has been a huge distraction over issues better solved in other ways.

The wall America needs is a monument on the south lawn of the White House dedicated to the victims and heroes of Trumpdemic 2020. Think, if you will, a wall with more names on it than that of the Vietnam War Memorial and one that honors all of those who have fallen in Trump’s “virus war”— the majority of whom were sacrificed by his ignorance and hubris to save his political campaign, or was it just his self-reflection. At this point it is too early to tell because of all the chaos and disinformation Trump has generated. Still, Americans like war memorials.

It will be controversial at first for sure because Trump is still in deep denial. Recently on Fox News he exclaimed, “Don’t blame me!”

However, when the truth, not the half truth or the “alternative” truth comes out — as it eventually will — there will be a great realization of exactly what wasn’t done to stop the spread of the novel coronavirus. The list of those failures should be memorialized on the top of this solemn wall with the exact quotes of Trump’s denials.

As previously reported in our April 16, 2020 issue Pandemic – Trump’s Timeline of Failure there were at least 10 different points in which the Trump administration could have taken protective measures before the onset of the pandemic.

The most significant in my mind is that in late October 2019, just before the coronavirus was emerging in Wuhan, China. The Trump administration refused to renew funding for PREDICT, an epidemiological research program funded by a U.S. Agency for International Development grant. Launched in 2009, the program was described as an early warning pandemic system. The program supported labs in 60 different countries. And, you guessed it, one of those was in Wuhan.

Now, there’s a lot of speculation as to the origin of the virus. Did it come from that Wuhan lab or from a wet market or somewhere else? One thing we can be certain of is that without that lab, our Center for Disease Control and Prevention had no access to what was about to emerge.

A timeline of Trump’s mistakes could read something like this- some of this courtesy of The New York Times.

On Jan. 22, Trump had an interview with CNBC’s Joe Kernen in Davos, Switzerland. The first American case had been announced the day before, and Kernen asked Trump: “Are there worries about a pandemic at this point?” The president responded: “No, not at all. And, we have it totally under control. It’s one person coming in from China and we have it under control. It’s going to be just fine.”

On Jan. 28, he retweeted a headline from One America News, [an outlet with a history of spreading false conspiracy theories] “Johnson & Johnson to create coronavirus vaccine.” They may have started on this in January but as of May 10  60 Minutes reported they won’t have anything ready until the end of the year at best.

On Jan. 30, during a speech in Michigan, he said: “We have it very well under control. We have very little problem in this country at this moment — five. And those people are all recuperating successfully.”

Trump spent the first weeks of February telling Americans that the problem was going away. On Feb. 10, he repeated — in a speech to governors, at a campaign rally and in an interview with Trish Regan of Fox Business, “Looks like by April, you know, in theory, when it gets a little warmer, it miraculously goes away.” It’s now mid-May and the COVID-19 deaths have reached 80,000 and are rising by the day.

Later he criticized CNN and MSNBC for “panicking markets.” He said at a South Carolina rally that “the Democrat policy of open borders” had brought the virus into the country. He lashed out at “Do Nothing Democrat comrades.”

He tweeted about “Cryin’ Chuck Schumer,” mocking Schumer for arguing that Trump should be more aggressive in fighting the virus.

The next week, Trump would blame a Barack Obama administration regulation for slowing the production of test kits. There was no truth to the charge.

On Feb. 29, he said a vaccine would be available “very quickly” and “very rapidly” and praised his administration’s actions as “the most aggressive taken by any country.” None of which has been done to date and there will probably be no vaccine until after the November election.

He has suggested on multiple occasions that the virus was less serious than the flu. “We’re talking about a much smaller range” of deaths than from the flu, he said on March 2.

On March 10, he promised: “It will go away. Just stay calm. It will go away.” It has now surpassed every previous flu epidemic in terms of infections and deaths except for the 1918 Spanish Flu.

On the night of March 11, Trump gave an Oval Office address meant to express seriousness. He included some valuable advice, like hand washing. But it also contained many of the old patterns of self-congratulation, blame-shifting and misinformation. Afterward, his aides corrected three different misstatements.

The Food and Drug Administration has not certified this drug or the use of disinfectants for internal use, which later he promoted in his live briefings. The manufacturers of these products had to issue immediate public warnings after his comments advising the public that Lysol and chlorine were not for internal use.

And to this day, Trump’s misinformation campaign, the conspiracy theories promoted for his defense and the continued lies from his briefings have not stopped. Nor are they likely to stop as the pandemic spreads throughout the homeland in Middle America and the death toll quickly approaches 100,000.

And the reason for including this timeline on the memorial wall is so that it acts as a reminder to both protect the truth from the lies of Donald J. Trump and to vaccinate future generations and presidents against the insidious disease of disinformation.