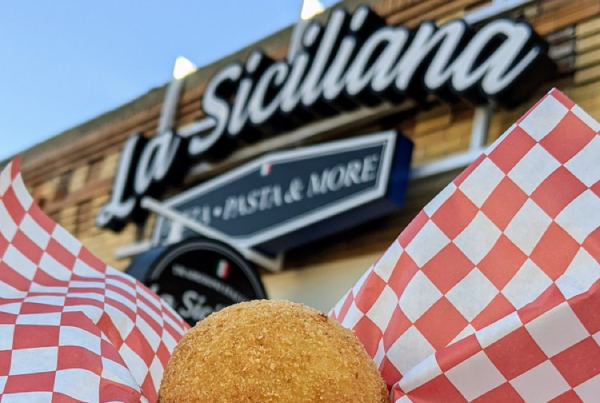 Sicily is blessed with the sun and the citrus, the sea and the sage common to the Mediterranean. San Pedro shares the blessings of the sun and sea, and now is complete with the cuisine of Sicily at home on 6th Street.  La Siciliana is a tiny piece of Palermo transported to downtown San Pedro.

Sicily is the hard baked stone being kicked by the boot of mainland Italy.  It has been occupied and liberated and conquered and settled by many cultures over more than 4,000 years, and the music and cuisine reflect that.  From every direction, the influence of Africa, the Middle East, Europe and the New World have all made a mark on Sicilian life and culture.

The patina of centuries of living show on the ancient buildings and the worn cobblestones of downtown Palermo.  Oranges and lemons grow everywhere, and street trees are often citrus, both for aroma and fruit. The idea is that no one will go hungry with fruit growing abundantly.

La Siciliana is making authentic, homemade cuisine, speaking the dialect of Sicily, with fabulous handmade arancini (stuffed rice balls), eggplant caponata (like a Sicilian salsa or relish) and handmade cannoli and cassata cake.  You may have had lasagne, even vegetable lasagne, but this is a revelation.

Alfredo tagliatelle pasta is rich and flavorful, a wonderful execution of the classic Alfredo. Ravioli with spinach and Parmesan cheese with marinara or ragu is comforting and just what you want to eat on a weekday evening. Gnocchi is Sicilian-style potato-based pasta, handmade and served with ragu. Close your eyes as you eat this gnocchi- you could be in the Sicilian countryside.

Pizza is splendid, hand made dough and that marvelous marinara, but smaller and square, made by your Sicilian nonna just for you.  Margarita is the traditional favorite, and this margarita is phenomenal but the bianca with mozzarella cheese, anchovies, olives and cherry tomatoes is very Sicilian and delicious.

Capricciosa is pizza with the works, marinara sauce, ham, artichoke, olives, mushrooms, peas and mozzarella for $6 — a good deal.  Calzones are made with housemade dough packed with eggplant and basil (Parmigiana vegana) or cauliflower, potato and onion with basil and sun-dried tomato (sciurietto vegano) or hearty impanata, stuffed with beef, potatoes, peas, onions and mozzarella cheese. Satisfying and even great to order for lunch the next day.

Panini are sandwiches with an education. The Sicilian version is top of the class.  Ham and cheese sounds mild, but the Italian ham and mozzarella cheese with tomatoes is smooth and full of flavor, wonderful to eat outdoors with the children.  The young ones will like the polpetta panini, a classic meatball sandwich with marinara sauce, Parmesan and mozzarella cheese. 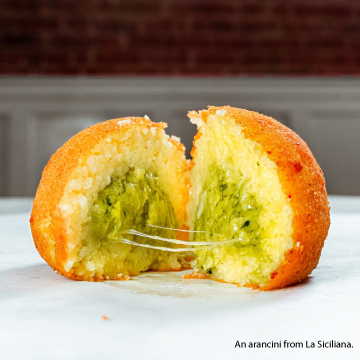 Arancini are made elsewhere in Italy, but the smaller, more delicate arancini made at La Siciliana are a delight to behold and to eat.  Rice balls are stuffed with a variety of fillings, from ragu to pesto to quattro formaggi (four cheeses), spinaci and prosciutto, La Vegana  (tomato sauce, onions and peas) or Norma ( marinara sauce, eggplant, parmesan and béchamel sauce).  All varieties are crunchy and fun to eat and are a special favorite of the short set.  They’re $4.50 each, so you can easily try every variety.

The side dishes on the menu are often overlooked.  Do not make that mistake here.  Grilled vegetables are lovely, and taste of the summer to come. Caponata is a Sicilian tradition, made of eggplant and other vegetables, with capers and raisins preserved in a sweet and sour sauce, meant to be served with meals as an accent, like a relish or salsa.  Both are great to have in the refrigerator to round out future meals or put on sandwiches.

Sicily is known for its spectacular desserts and La Siciliana takes the cake for superior sweets. Cannoli are not unusual in San Pedro, but cannoli at La Siciliana rival the best of Palermo.  Crispy, not too sweet, spiced delicately with preserved orange and tiny chocolate kisses, these cannoli are heavenly.  If cassata Siciliana is available, do not miss it. This cake is the pride of Sicily, stacked with ricotta and cream, spiced and decorated with chocolate and fruit.

La Siciliana is a delicious addition to the San Pedro restaurant scene, but like all restaurants these days, it’s offering its menu for takeout only.  Please call to order from the regular menu and ask about specials.

Bird Talk Chicken is All the Chatter