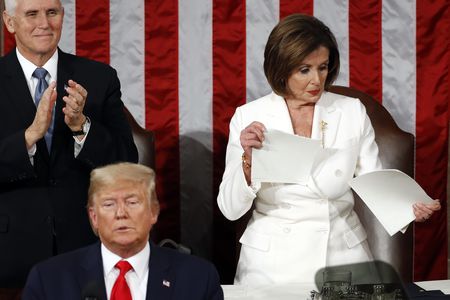 On the day before President Trump’s State of the Union speech, Rep. Adam Schiff in his closing arguments for conviction on abuse of power and obstruction of Congress gave the following argument. It’s probably one of the most historic speeches of Schiff’s career:

Now maybe you could have argued three years ago when he said, “Hey Russia, if you’re listening, hack Hillary’s emails.” Maybe you could give him a freebie and say he was joking, but now we know better. Hours after he did that Russia did, in fact, try to hack Hillary’s emails. There’s no Mulligan here when it comes to our national security. So what if China does overtly or covertly start to help the Trump campaign? You think he’s going to call them out on it or you think he’s going to give them a better trade deal on it? Can any of us really have the confidence that Donald Trump will put his personal interests ahead of the national interests? Is there really any evidence in this presidency that should give us the ironclad confidence that he would do so?

If the truth doesn’t matter, we’re lost. Framers couldn’t protect us from ourselves, if right and truth don’t matter. And you know that what he did was not right. That’s what they do in the old country, that Colonel Vindman’s father came from. Or the old country that my great grandfather came from, or the old countries that your ancestors came from, or maybe you came from. But here, right is supposed to matter. It’s what’s made us the greatest nation on earth. No constitution can protect us, if right doesn’t matter anymore. And you know you can’t trust this President to do what’s right for this country. You can trust he will do what’s right for Donald Trump. He’ll do it now. He’s done it before. He’ll do it for the next several months. He’ll do it in the election if he’s allowed to. This is why if you find him guilty, you must find that he should be removed. Because right matters . …. and the truth matters. Otherwise, we are lost.

February 4, 2020 Donald J. Trump explained to the nation and world just how lost he is while triumphantly and erratically gloating, then lying about how he’s made America great again. Clearly addressing a house divided by his own acts of corruption ― one party delusionally hanging on his every word about his roll back of regulations and anti-immigrant rants about “The Wall” amidst their maniacal chants of “four more years.” The other sat stone-faced, if they attended at all. Some decided to boycott the State of the Union altogether.

Trump went on to expound upon several points that Politifact and other news outlets have documented as falsehoods. It has become just too commonplace to even point out the number of times Trump has lied or exaggerated half-truths to stroke his own ego and delusional mindset. So why bother documenting them in detail?

Speaker of the House Nancy Pelosi did the only common sense thing in response to this speech by ripping up her copy of it on national TV at the end. Perhaps the Democrats should hold a speech shredding party and use the confetti for Trump’s next big parade? Perhaps the thousands of documented lies should be made into a collage on Donald’s Great Wall of America? Perhaps the Democrats should have stood up and turned their backs on this tyrant and then simply walked out of the capital while he was giving his fact-devoid speech like a few of them did?

However, this kind of solidarity is rare in liberal circles of power and only rises to a form of resistance when they are threatened by a demoguage whose inclination is to steal his way into power and continue to corruptly abuse that power again and again. Do the Democrats have the nerve to impeach him twice or thrice if he were to be reelected? There is no limit on the number of times a president can be impeached before he is removed. Even more importantly, would the president who replaces him have the courage to see Trump indicted for all the high crimes he committed before and during his term in office? One can only hope at this point.

What does seem to be more of an issue and the weak point on the part of the opposition to Trumpism is the split between progressives and the neo-liberals as exemplified in the vote counting in the Iowa caucuses. The Clinton wing of the Democratic Party, which still seems to have hold of the Democratic National Committee, is doing its very best to keep Senators Bernie Sanders and Elizabeth Warren sidelined in favor of Pete Buttigieg and Joe Biden for the presidency. And the national so-called liberal media seems to be going along with this bias.

Meanwhile, Trump, amplified by his FoxNews megaphone, continues on his tirade about anything coming close to universal health care as being “evil socialism,” as if Social Security and Medicare, public education and the US Postal Service are something un-American.

Adam Schiff is correct– If the truth doesn’t matter, we’re lost. [The] Framers couldn’t protect us from ourselves.