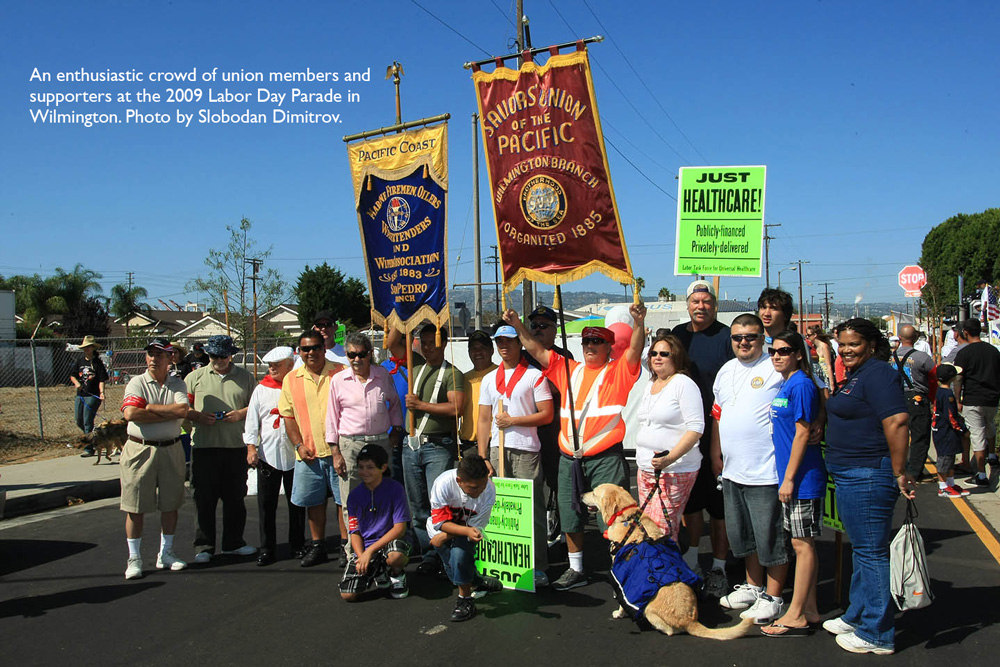 Thousands of union members and supporters from throughout the Los Angeles Harbor Area and the rest of Los Angeles County will gather for the annual Harbor Labor Day Parade Sept. 2. The event celebrates 40 years since 14 unions and their supporters gathered on Broad and E streets on September 1979 and began their march to Banning Park. Dave Arian, David O’Day, Diane Middleton and Luisa Gratz started organizing the Harbor Labor Coalition the prior year.

Then, as now, they will meet up with old friends, swap war stories and listen to speakers, extolling the virtues of the labor movement and the struggles of the men and women who toil in the harbor communities and beyond — much in the same way as their forebears did two centuries ago in the major port towns of the East Coast.

On this day, politicians are welcome to show up. But they are not allowed to make political speeches or pass out campaign literature. This is the one day of the year when only labor issues are addressed.

The Harbor Labor Coalition, the parade’s originator and organizing sponsor, was brought together by one struggle in 1979, involving the Inland Boatman’s Union  fending off an attempt to impose an inferior Florida-based contract onto the Los Angeles Harbor Area workers. It was consolidated the next year in support of the Oil, Chemical and Atomic Workers  in the midst of a bitter strike. IBU coordinator, O’Day, and treasurer Robert Forrester were able to organize 10 unions in support of their dispute, including Arian who had just joined the ILWU Local 13’s executive board.

What makes this parade unusual is that during the period of the late 1970s, Labor Day parades were gradually being replaced with picnics throughout the country. Detroit, long the site of some of the biggest Labor Day parades, ended the tradition by the 1980s. The Harbor Labor Coalition, not to be dissuaded, would be the vehicle by which a Labor Day parade, once held long ago in San Pedro, would be brought back to life in Wilmington, California. Though a conservative act, it was wholly in keeping with that go-their-way-attitude of so many of the unions in the harbors, whether from the ports of Los Angeles or Long Beach.

The Carter administration was intransigent in its approach to squelching problems within the economy of the late 1970s. President Jimmy Carter did this through a price-wage combination, which focused primarily on forcing down wages.

This infuriated the AFL-CIO’s president George Meany, and sparked a war of words through the media and a standoff at the bargaining table. The test came with OCAW’s new contract negotiations and later with the Teamsters’ contract under its then-president, Frank Fitzsimmons. The Carter administration was able to claim victory in its confrontation with big labor during the Teamster contract negotiations.

As a sidenote, the labor movement actually gained more concessions under the Nixon administration than under any administration since. This was due to Meany’s special relationship  with President Richard Nixon as a trade off for his support of the Vietnam War. In the 1992 election, Meany blocked AFL-CIO endorsement of McGovern, who had excellent pro-labor credentials. This was a huge political favor to Nixon, who just like Donald Trump, treated politics almost exclusively as a series of what’s-in-it-for-me deals.

Resistance From the Top

It was during the Carter administration that the labor movement’s troubles began as it mangled arduously developed relationships that were earlier established and peaked during the Nixon years. The administration’s efforts proved to be a boilerplate by which the Reagan administration in the 1980s would pursue its own r agenda against the union movement.  The air-traffic controllers organization walked off the job, in August 1981 setting off a chain of events that would redefine labor relations in America.

In response to the walkout, President Ronald Reagan issued one of the defining statements of his presidency. He said the striking air-traffic controllers were in violation of the law; if they did not report to work within 48 hours, their jobs would be terminated. Reagan carried out his threat and the battle over union jobs has been fought ever since.

The atmosphere under the Carter administration was so charged during this period that Time magazine ran an article on Jan. 1, 1979, titled “Labor: A Year of Showdowns.”

That tension quickly became apparent during a jurisdictional dispute over the importation of a contact from the wage-depressed Southern state of Florida into the ports of Los Angeles and Long Beach.

O’Day, in a full-page letter in the Harbor Labor Coalition’s dinner awards program in May 1991, commented that the Los Angeles and Long Beach Harbor Labor Coalition was originally started to address the IBU’s jurisdictional dispute with the Seafarers International Union and Crowley Maritime Corp. in 1979. Crowley ran a tugboat operation in Florida under an inferior contract to the one used on the West Coast.

There has been some confusion as to what drove the formation of the Los Angeles/Long Beach Harbor Coalition. Many people remember the 1980 OCAW strike and consider that as the driving force in starting the coalition. However, according to the records of the coalition itself, it was the IBU and SIU conflict that initially drove the formation of the Harbor Labor Coalition.

This was an effort to address concerns locally, by which, through unity, the various disparate locals could channel their resources and fend off attempts to bring down wages, benefits and other attacks on the harbor unions. The impact of that fight is still felt today in the harbors, through the increased resolve created to fight the “good fight” by workers who would not be denied their livelihoods.

The OCAW, being a local Harbor presence, went to the Coalition to seek support in its contract fight. The Coalition came forward as a show of unity to promote OCAW interests. Eventually, the Harbor Labor Coalition hosted a parade on Avalon Boulevard in Wilmington in March 1980 in support of OCAW contract negotiations during the 1980 strike.

Before the coalition was founded, David Sickler, former regional director of the State Building & Construction Trades Council’s Southern California, called the locals in the Los Angeles Harbor a “clannish group.” In the late 1970s, the harbor unions wanted to form their own central council, along with their own charter. This was strongly opposed by the AFL-CIO International.

The ILWU, being one of the largest Harbor unions, did not itself become re-affiliated with the Los Angeles County Labor Federation until 1988. Historically, this is a pattern that has been repeated many times by other unions.

In 1981, the Los Angeles Labor Coalition’s Labor Day parade was used to address labor’s displeasure with Reagan’s firing of air-traffic controllers. By 1982, the coalition itself was re-energized through an increased number of participant unions. One would be remiss in not mentioning another event that has had an influence on Labor Day activities in the port area. That would be the role of the labor breakfast held in downtown Los Angeles.

Cardinal Roger Mahoney’s opposition to an effort by gravediggers in Catholic cemeteries to join a union in the late 1980s strained his relationship with the labor community. While many have related the cemetery workers failed organizing to the cessation of the Catholic Labor Institute Breakfast, in actuality, the breakfast had started to fizzle out by the mid 1980s. By the time the cemetery workers’ organizing drive was squashed by Mahoney, who by the late 1980s was an archbishop, the Catholic Labor Institute’s breakfast had already faded into history.

Within a few years, the Labor Day breakfast was given a new venue at Los Angeles Trade Tech when John McDowell was chairman of the Labor Studies Department there.

While politicking was not allowed at the Harbor Coalition’s post-parade rally, it was the very substance of the labor breakfast at Trade Tech.

Under Miguel Contreras (former head of the County Federation of Labor, AFL-CIO) the labor breakfast was moved to the Cathedral of Our Lady of the Angel. For this to happen, Cardinal Roger Mahoney had reached out to Contreras in an act of reconciliation — wiping the slate clean from the bitter fallout over the cemetery workers’ strike, according to Sickler. It was a move strongly supported by Miguel Contreras.

At 10 a.m. after breakfast, the Cardinal held a mass on behalf of the workers. Needless to say, this conflicted with the parade’s schedule, creating a pell-mell dash from Cathedral to the port, so as to at least not miss the rally.