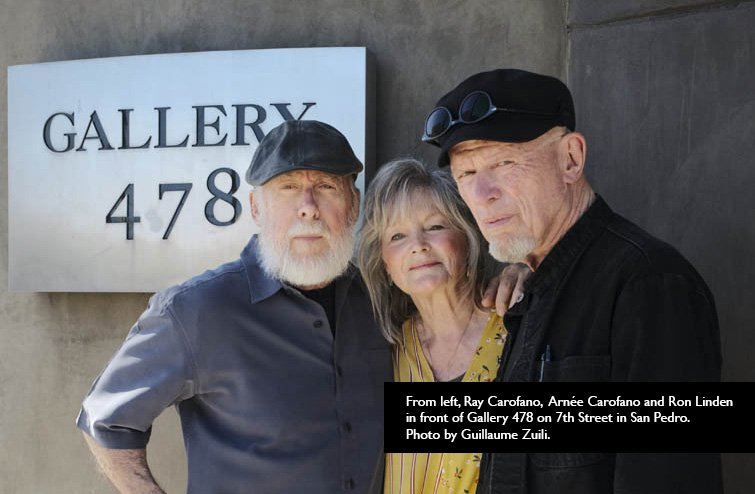 Three pioneering artists, who for a quarter century have worked, educated and exhibited the highest level of professional art in Harbor Area and far beyond, will be honored at the San Pedro Waterfront Arts District’s annual summer fundraiser on July 14.

The event will feature art from the venerable San Pedro artist, Muriel Olguin, as well as curated pieces from many others in the Art Deco building at 8th Street and Pacific Avenue. The artwork will be for sale to benefit the Arts District.

Random Lengths News sat with TransVagrant gallery curator Ron Linden and Gallery 478 proprietors Arnée and Ray Carofano for a chat about the arts district, its changes and the requirements necessary to support such an entity.

For the first 15 years of this century, the Carofano’s anchored San Pedro’s budding arts district by inviting cutting-edge artists from across the country to their gallery and hosting regular artist openings. Gallery 478 was not alone in this work, but it did lead the charge.

Linda Grimes, the managing director of the San Pedro Waterfront Arts District, assembled a temporary committee of last year’s honorees (Anne Olson and Eugene Daub) plus Gallery Azul and Carol Hungerford to select those to be honored in 2019 for their contribution to San Pedro’s art scene.

“They were active participants at the formation of the district in 2009 and continue to make significant world class contributions through their gallery exhibitions, continuously adding to the communities’ knowledge of art and appreciation of exceptional artists,” Grimes said.

Linden and the Carofanos came to San Pedro in 1991 and 1998, respectively. They have had a long, sometimes painful, history with the San Pedro Waterfront Arts District. During the 1990s and into the 2000s, with its galleries, studios and with the start of First Thursday Art Walks in 1998, the arts district slowly grew and thrived. These three artists, along with James Allen, publisher of Random Lengths News, launched the idea to create the Arts, Culture and Entertainment, or ACE, district.

Linden, Carofano and Allen created its guiding principle: one of “enlightened self-interest,” meaning that what is good for the individual artists in the district is inherently good for the greater community. The ACE notion of self-interest, however, does not mean that this district exist to amass greater personal power, wealth or control for those forming it. Instead, its purpose has been to distribute as equitably as possible the benefits of this district without regard to status, position or other bias.

The ACE District was launched in 2008 with a $500,000 Community Redevelopment Agency grant intended to market the arts district and its connection to the San Pedro Waterfront and finance quality art shows that would bring critical recognition to San Pedro area. The effort was widely endorsed by both the arts and business communities. The original ACE District was formally adopted by the Los Angeles City Council and remains a part of the San Pedro Community plan as a key economic factor in redevelopment.

The praise proved to be short-lived. Gov. Jerry Brown soon announced he would  disband the Community Redevelopment Agency during the great recession and in effect ended a reliable funding source to the district. However, the effort continued and the legal standing of the ACE District has been expanded with recognition by the State of California as one of 14 cultural arts districts.

By 2015, conflicts over transparency, direction and the removal of dissident artists from the board (or exodus of artists depending on one’s perspective), the ACE board voted over the objection of some of its founding members, to disband and form a nonprofit that could apply for grants and sponsorships that might keep the group in business. Since that time it has been run as a private non-profit.

“Prior to [2008] we were able to get money from the CRA,” Linden said. “When that went away, we were totally on our own. [CRA] gave us money to build the walls in the gallery and the lighting system. The galleries applied for grants and received funds to produce catalogs for exhibitions.”

Linden contends this is the kind of “civic support that is needed for an arts district to thrive. The CRA benefited the whole arts community.” Subsequently, the reputation of First Thursday grew out of a regional recognition that something important was happening.

“We survive by our own means right now,” Linden said. “If the community at large realized that it takes effort and money that comes from artists, for the community, they might think of artists differently. But nobody thinks like that.”

During this period of transition in the ACE District, the  San Pedro Business Improvement District morphed into property owners Business Improvement District, a quasi-public entity in which property owners can assess a property tax on themselves to pay for PBID initiatives that benefit the district— the boundaries of which coincide with the ACE District. They pay for yellow shirt security that have placed surveillance cameras in downtown.

“We did our best to stop it because we figured out the increase that everybody in the district including us [had to pay] is now on our property tax,” Carofano said. “There’s no way out of it. When it was just BID it was an option for a property owners to either pay some money into it or not.”

Linden spelled out that there are equal amounts of resentment and appreciation.

“We have done more goddamn work—leg work, written work, exhibition, production, etc., etc., etc. than almost anyone,” Linden said. “It’s just ironic that you can work your ass off in relative obscurity and provide the best you can, the most professional exhibitions. [This work] has real value but it’s largely unrecognized.”

That’s because some in the community still don’t recognize the value that the art district brings to an urban area.

Linden and the Carofanos praise the individuals and galleries still fighting the good fight in support of the arts district.

Arnée, Carofano and Linden said they absolutely have no doubt that James Preston Allen, the founding president of the arts district, has been a good advocate. They called arts patrons Marilyn Ginsburg Klaus and Chuck Klaus unsung heroes.  The Klaus Center for the Arts is property the couple donated to Marymount University. The purpose of founding an arts institution in downtown San Pedro was to give talks on how to be an artist and live and work in the same space. The Klauses bought a house and remodeled it for Syracuse University fine arts students to stay for a semester of arts study in the Los Angeles area. They also have a standing lease on Angels Gate studio spaces for the students.

Linden and the Carofanos also highlighted others like Robin and Doug Hinchcliff, who for years have provided live-work spaces.

Gentrification has the artists worried about what will happen next. Linden wondered if galleries, like the Machine Art Gallery, with its “appeal to young people” would be priced out of existence with rent. “Will artists who live here have to go find a new ghetto?” Linden said.

Rent increases are really a big issue throughout the county. It’s getting harder to find a place reasonably priced for artists. Some have left.

Arnée suggested they should give artists a break and a few artists should be on the PBID board to represent the arts community and get involved with the port’s waterfront projects. The Port of LA used to have a professional arts review panel of which Linden was a participating member.

“What we need are a few more quality galleries,” Carofano said. “We need younger people than us [to] open galleries here.”

While it’s frustrating for these visionary artists to witness missed opportunities for the art district to thrive, their vision is undying. Linden said it wouldn’t take much to build mega-European style gallery spaces out at the Warehouse One area, for instance. What a boost to the San Pedro Waterfront Arts District to go from imagining to actualizing high-level professional live-work studios and galleries for artists, for educational opportunities and the community at large, as well as for multitudes of visitors that the Port of LA is trying to attract to this artistically rich port town.

In the end,  recognition for this trio is long over due.

San Pedro Festival of the Arts 2020

Funding For The Arts Proposal