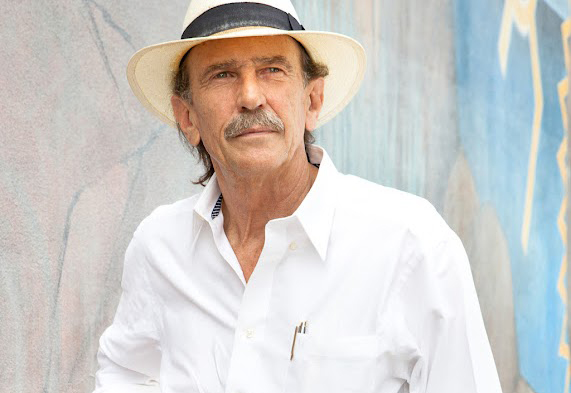 The other day it rained around noontime, an unseasonal downpour that lingered briefly, then blew on out to the Arizona desert and beyond. By early evening, as I stepped out of my back door, I looked up at the clear sky and I asked myself, “Did it actually rain today, or did I just imagine it?”

It’s the same kind of feeling I get from watching the 24/7 news cycle these days — a news storm crosses my screen and stays there for a few hours before becoming the next Twitter rant from the Oval Office or the latest car chase across the metropolis. Then it’s gone and I remember it as well as yesterday’s weather. It’s the digital rain in an era in which instant info-data reigns. We’ve all become accustomed to the distraction it causes one way or another.

It is said that this technology is the undeniable future, that automation and artificial intelligence are unstoppable. This may or may not be true. What is more important is how we integrate these into human action and thought. In this information age it appears as though you can know little but have access to everything — facts without wisdom. We have abandoned the crafting of things with our hands to become voyeurs on little screens that provide us with instantaneous gratification and feed our addictions.

Those who are adroit at manipulating this “new media” by tracking our likes and dislikes, purchases and politics, use media like a feather toy distracting a cat. And being very visually acute, we humans watch the scary car chase, the bloody mayhem of an accident or the ravages of a Midwestern tornado as the smiling faces of news readers in well-suited outfits fake concern or shock. Most of the time, broadcast news resembles reality TV shows — scripted dialogue with bits of edited video clips to shock or astound.

And I wonder, “Where have the real journalists gone?” Where are the ones with the experience to not just report but to give some analysis and perspective? Have they all died off or been forced out like Dan Rather? No, they are still around reporting on Democracy Now!, The Intercept and other truly alternative media. You can find more at https://tinyurl.com/alt-news-services.

Clearly, most of the talking heads on TV today are just that — talking heads chatting up the news to entertain but not really inform you.  This is where the trouble lay — too much information without context or memory of what happened before. Then there’s the blurring between fiction and real life with ripped-from-the-headlines police procedural shows, exaggerated for shocking effect to the delight of viewers who just can’t get enough of it. And, it’s all produced for audience ratings, which in turn brings in advertising dollars to keep the hamster wheeling and the viewer distracted. Did that sex crime really happen or was it just on the special crime victims show?

In this infotainment arena, Donald J. Trump is the master of distraction. If there were a Twitter prize or contest he’d be the winner — but only in the category of distracted Twittering.  His only qualifications for being elected to office seem to be his reality TV bully persona, his 55 million Twitter followers and his exaggerated claims of being a billionaire.  However, according to Thinkum Media, a web platform that aims to tell the story behind the numbers, Trump doesn’t even rank in the Top Ten in Twitter followers. In April, singer Katy Perry’s account @katyperry had 107.23 million followers, while former President Barack Obama’s account had 105.82 million followers.

What we all can notice is that at every juncture when the FBI or congress comes close to discovering what his real tax returns might expose, Trump invents another crisis. One day it’s caravans of aliens invading our borders. Another day it’s war with Iran, and a different day it’s missiles in North Korea. Then it’s him handing a Presidential Cup to a sumo wrestler in Japan. In return, Trump was able to miss the backlash over his pardoning U.S. war criminals on Memorial Day.  Can it get any worse?

Hardly a day goes by that Trump doesn’t use his Twitter feather toy to distract the media with yet another outrage, insult and lie as a tactical maneuver to avoid the underlying truth — this man is unfit for office.

Only when congressional Democrats get their hands on the underlying documents in the Mueller report and impeach Trump for those 11 instances of obstruction of justice or expose his financial links to Russian oligarchs and money laundering, will this reality TV presidency end. Until then, it will be incessant, repeated distraction to keep us all from thinking about the really important stuff, while the mainstream media covers this president’s every little tweet.

I am waiting for the day I walk out my back door and ask, “Did it actually rain today?” and wonder if these past few years of Trump really happened.