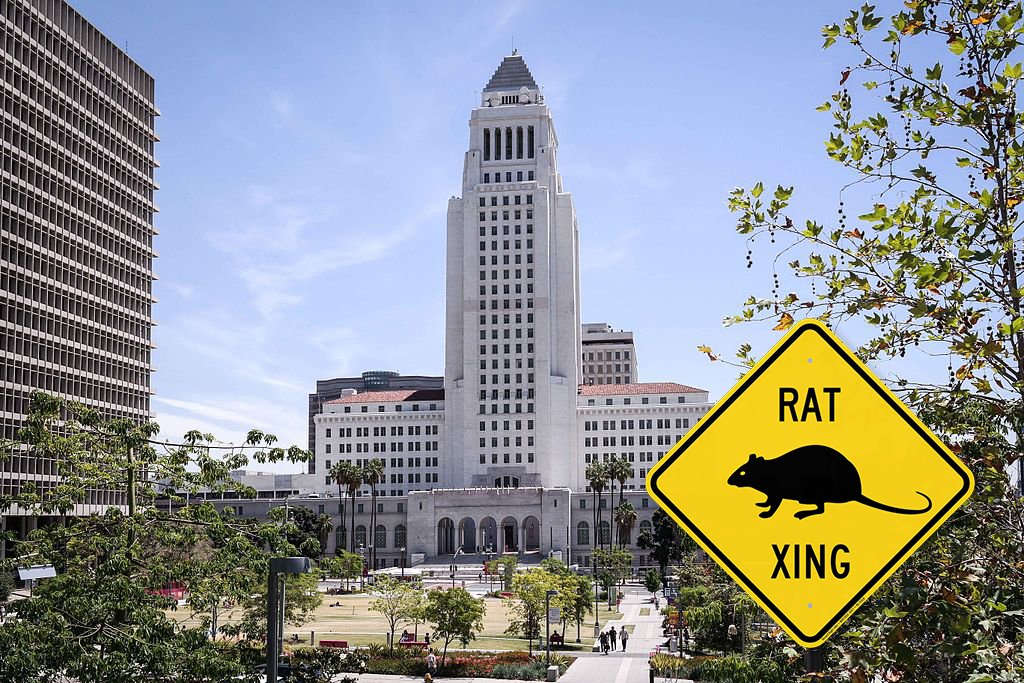 The City of Los Angeles is deeply invested in the long-standing vision of itself as a great metropolis carved out of the desert on the edge of the Pacific Ocean. This vision evolved over time, but came into focus with the annexing of the harbor (now branded as America’s Port) and William Mulholland’s dream of delivering water from the Eastern Sierra to thirsty Angelinos. “Here it is, take it!” Mulholland exclaimed when the waters gushed down into the valley. It was a scheme as astoundingly bold and brilliant as it was corrupt. Just go back and watch the film Chinatown to get the flavor of the times.

The symbol of this great vision of Los Angeles is manifest in its distinctive City Hall tower which is based on the shape of the Mausoleum at Halicarnassus (a tomb built between 353 and 350 BC at present-day Bodrum, Turkey).   If by some chance you’ve never visited L.A.’s City Hall, it is very rich in both architecture and civic opulence. It’s a Neoclassical base with an Art Deco tower.  I’ve never really thought of the place as a mausoleum, but upon further reflection it is a place where many good ideas have died and been buried.

The recent report that rats with fleas infected with typhus have infested this august building is a metaphor so rich with double entendres as not to be overlooked. This metaphor is better apt to describe the city’s failure to cure the crisis of homelessness, or City Hall’s pay-to-play-culture as revealed by January reports on the FBI’s investigation into developer contributions to councilmembers’ favored charities. Are the two problems somehow connected?

City Hall has spent billions of dollars building up and gentrifying the downtown core with high-rises, upscale hotels and entertainment complexes at the expense of providing adequate affordable housing throughout the city. Clearly the housing crisis, homelessness and pay-to-play corruption are connected at the corner of Temple and Main streets.

That the Los Angeles City Council has to now consider its own health and safety, as well as that of city employees, should be motivation enough to recognize that homelessness is as much a public health issue as it is a moral crisis. Imagine if you will rats on either Skid Row or in City Hall were infected by the plague!  There would be an immediate call to action. As long as homelessness is not considered a public health issue the result will be  major outbreaks of infectious disease at some future date.

So the citizens of our great metropolis continue to nag about the encampments along their streets and pay large sums for sidewalk cleanups without any relief.  Do you suppose that the Department of Sanitation might actually provide people without shelter the same trash pickup services they do at other residences? Maybe I’m just being optimistic here, but perhaps if the city actually gave out trash cans to the “urban campers” they just might use them and with some encouragement keep their sidewalk space cleaner.  Likewise, portable toilets might actually be a common sense solution. These actions are the least City Hall could do if it actually considered homelessness a true humanitarian crisis as opposed to chasing homeless people around and confiscating what little they have.

The solutions are staring us in the face.

First, set up triage centers near or at the places where homeless people camp or park and provide services right there.

Second, sort out who’s who — meaning get treatment to those suffering addiction, mental or medical conditions by referring them to appropriate agencies.

And thirdly, build temporary bridge housing while the city and county figure out the housing crisis, which will take at least a decade to build enough permanent units.

The problem of course, is that there’s far too much developer money circulating around City Hall that doesn’t target building Affordable housing that is needed in every other part of the city.  Is there a solution to this crisis? Yes. Make every developer who has a project in front of City Council donate to the city’s affordable housing fund a minimum of $1 million or two percent of the cost of the building, whichever is more, and forbid political donations from developers and their lobbyists!

This just might fumigate City Hall to the extent it builds more affordable housing units. However, unlike the imaginary crisis along our border with a rat of a different species, the housing crisis in LA and California is real and can be solved. But as usual, we won’t fix it until we admit that it’s broke!