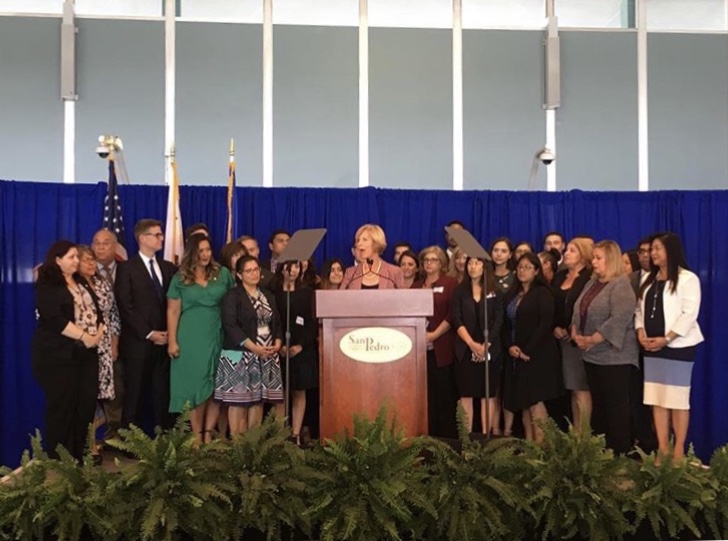 It was kind of curious that Los Angeles County Supervisor Janice Hahn delivered her second State of the County speech at the World Cruise terminal just a month before the mid-term congressional elections. The San Pedro Chamber of Commerce sponsored event took place on Oct. 10. It’s not as if she’s running to get reelected this season, but is there ever a time a sitting elected politician isn’t running for office? What is curious is that this Port of Los Angeles-owned facility is the only place in San Pedro where you can pack more than 500 well- connected business executives and city government types into one room and charge them too much for a rubber chicken luncheon.

That this event is held as a fundraiser for the San Pedro Chamber is no surprise since the Chamber of Commerce president, Elise Swanson, worked for Hahn during Hahn’s time on city council and congress. Tim McOsker, the chairman of the Chamber’s board, served as chief of staff for former Los Angeles mayor and Janice Hahn’s brother, Jim Hahn. Connections go a long way in politics.

Hahn proceeded to tell those gathered that:

The State of the County is strong! Last week we passed a $32.8 billion balanced budget that invests in everything from our workforce, to our libraries, to affordable housing, to our infrastructure, to modernizing our election system.

This budget, and the political power that comes with it, are the main reasons why those in attendance came to hear what might otherwise be considered a less than surprising speech by someone not running for reelection this year.

The takeaway from the Daily Breeze ‘s reporting on the event, that last bastion of conservative media in the 4th District, was: “Hahn calls on communities to do more to solve the homeless crisis.” Missing from their reporting were her points on mental health urgent care, mobile home rent control, the update on the San Pedro Courthouse development and Ms. Hahn becoming the chair of the LA County Board of Supervisors in December. All minor points when you are trying to inflame the ire of the pitchforks and torches folks I presume.

That Hahn is now going to be setting the agenda for the most powerful local government entity in California for the next year seems to be no small deal and those wanting to get their motions put to the fore should stand up and take notice.

There is considerably more that LA County could do with a budget that is larger than some states in this nation, but the solution to the homeless crisis at this point isn’t really about money, it’s about political will to actually act on solutions. Both the county and the city of Los Angeles seem lacking in skill-set to confront the underlying causes and the effects of the crisis. They are hamstrung on legalities, and they fear the vox populi screaming over social media about “vagrants.”

On the November’s ballot, there is Prop. 10, a measure that would change the state’s rent control law so that local governments can enact laws to address the housing crisis in California — one of the leading causes of homelessness. I’m urging voters to vote YES on it. You can see our other ballot endorsements on page 5 of this issue that include one surprising candidate endorsement for LA County Sheriff —Alex Villanueva.

Villanueva is one of those curious law enforcement officers who places justice above enforcement, a man who sacrificed career advancement inside of the LA County Sheriff’s Department by becoming a whistleblower on management and the department’s corruption that surfaced under the administration of former Sheriff Lee Baca and Undersheriff Paul Tanaka. This earns him high rankings in my mind. The last thing we want from our law enforcement officers is to have them break the very laws they are paid to enforce. And it is high time to clean house in the LA County Sheriff’s Department. Alex Villanueva may be the best chance we have to do this before the next scandal surfaces in this department.

However, scandals abound in the GOP-held White House and congress. So much so that they have become their own form of dysfunctional infotainment. The real news cycle is almost better than watching Saturday Night Live satire of the actual events. Except that the actual impact of the sheer stupidity and arrogant greed at the national level is so horrific as to almost be unbelievable. Think about Judge Brett Kavanaugh’s testimony about beer drinking during the Senate confirmation hearings, or any day the Trumpster just makes things up and posts them on Twitter.

These are the times that challenge the soul of our republic and if you are confused by the deluge of competing ads over propositions and congressional candidates in the coming election, you are not alone. Just don’t disengage out of disgust over the Reality TV Oval Office show —GO OUT AND VOTE LIKE YOU MEAN IT!