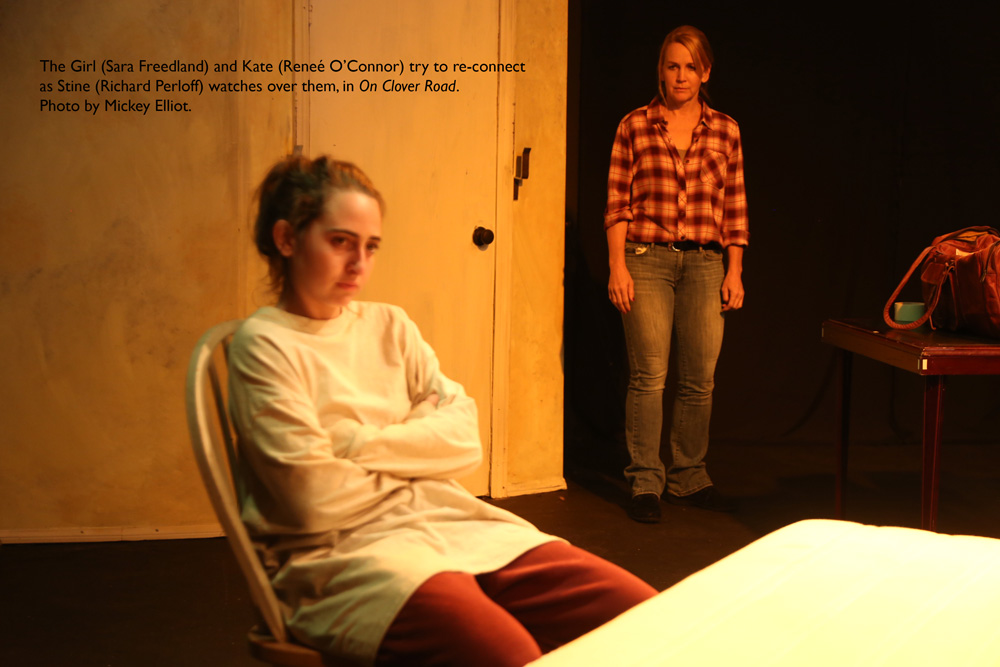 Four years ago, 13-year-old Jessie disappeared. Whether she was kidnapped or ran away, she’s now a member of the 5th House Center for the Awakening Mind, an apparent cult. Kate (Renee O’Connor) has hired Stine (Richard Perloff) to abduct and deprogram her daughter. In a rattrap motel room on Clover Road they plan for how they’re going to bring Jessie back home both physically and mentally. But whose plan is really being carried out?

It’s a promising premise, and after the opening scene it seems like On Clover Road might deliver the goods. The interplay between Perloff and O’Connor is taut. He baits her at every turn, and her resentment is palpable. “I’m a pig, by the way,” Stine says, advising her that disliking him will increase their chance of success.

But how her disliking him might help is merely the first of many questions that go unanswered, and ultimately whatever is effective about On Clover Road collapses into a sinkhole of logical inconsistency in both writing and delivery.

While both playwright Steven Dietz’s script and Little Fish’s execution are solid in that first of the three scenes that comprise this 80-minute, intermission less play, things go downhill quickly. Early in Scene 2 Dietz’s dialog groans under the weight of both too much exposition and his failed attempts to wax poetic. “It’s awful, isn’t it?” asks Kate to the girl (Sara Freedland) who may or may not be Jessie. “It’s like in this room is the place they invented misery.” Huh? On the performance side, I can’t begin to guess why Kate pours a thirsty alleged-Jessie about literally one drop of water from a thermos as opposed to a cupful. There’s no contextual logic for this; it’s simply a performance choice that makes zero sense.

The rest of the play follows this pattern, as logical flaws in the writing alternate with logical flaws in the staging. SCRIPT: “If you weren’t kidnapped, [the police] won’t go looking for you,” Kate laments to alleged-Jessie. Really? On what planet don’t police look for missing 13-year-olds even when it’s certain they weren’t kidnapped? And how would they know whether a missing 13-year-old was kidnapped or not? She’s missing! EXECUTION: Kate hangs up a smartphone the way we used to hang up landline receivers in their cradles, rather than pushing the little disconnect button on the little smartphone screen. SCRIPT and/or EXECUTION: Despite dialog referring to “the rope that binds her to this chair,” not only is the supposedly bound person not convincingly bound in general, but she stands up over a half-dozen times as if to demonstrate the fact that clearly she is not bound to this chair.

That’s the long and the short of it. On Clover Road is a puzzle, but not in the sense it’s supposed to be. The play’s resolution is unconvincing, even if it does close on a reasonably affecting moment that is passably well conceived and executed. Perhaps if both playwright and theatre company had given us more prior to that moment—more detail, more meat, more of an effort to keep it real—we might be able to invest in the convolutions of this mystery-cum-caper. But as it is, we’re left to wonder why about the wrong things.

Wilmington Job and Safety at Refineries