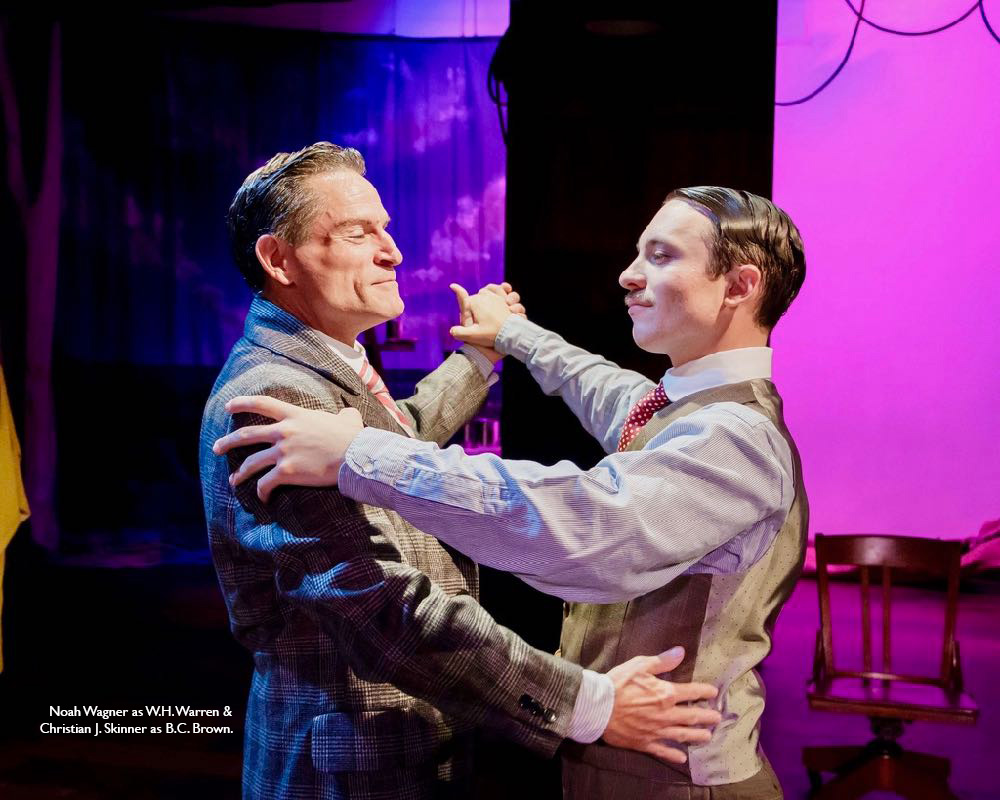 In 1914, W.H. Warren and B.C. Brown, two men with no law-enforcement experience, were hired by the Long Beach Police Department as special vice officers charged with ferreting out the city’s “social vagrants” by posing as gay men to  infiltrate the community and entrap its members. They personally received $10 for each collar, and their 31 arrestees—“shameless men,” according to the Los Angeles Times, which printed all of their names—paid a total of $5,275 in fines. Ten were jailed for 180 days apiece. “But what a holy city Long Beach is!” wrote the Times in complete earnestness. Only florist Herbert Lowe fought the charges, winning acquittal when the suicide of one of his fellow sting victims apparently soured his jury to the whole sordid business.

You can’t make this stuff up. Or I suppose you could, but playwright Tom Jacobson didn’t have to. All of this, which forms the basis for The Twentieth-Century Way, is part of the historical record. Jacobson’s creative conceit is to refract these facts through the lens acting—as both craft and how we move through life—as a means to look for personal and societal truths. It’s a clever, compelling, and unflinching search, one that Long Beach Playhouse carries out exceptionally.

There are two performers in The Twentieth-Century Way, and they have shown up separately to audition for the same movie role. Warren (Noah Wagner)—not his real name, we learn right off—seems to know more about what’s going on here than the man he christens “Brown” (Christian Jordan Skinner).  After a bit of verbal jousting about whether the best acting method flows from the outside in or the inside out, Warren suggests a challenge: they wade into a pool of improvisation, and whichever is bested will exit the audition hall. Brown accepts, and with Warren leading the way the pair is quickly immersed in the story of their historical namesakes and interest the LBPD in their scheme.

Neither Wagner nor Skinner ever leaves the stage, and without a single scene change there is literally nowhere for the actors to hide. Plus, as Special Vice Officers Warren and Brown dive ever deeper into their unseemly endeavor, actors Warren and Brown take on a variety of ancillary characters—other police officers, newspapermen, attorneys, victims of the sting—to populate their improvisation, occasionally resurfacing as themselves to visit their reactions to the actions of the vice officers their playing. It seems like exhausting work for Wagner and Skinner, but you’d never know it from their steady, sure, meticulous, and often moving performances.

Director Reed Flores’s staging helps Wagner and Skinner in all the right ways. The Twentieth-Century Way is talky by design, but Flores devises a variety of subtle shifts to keep it from ever feeling static or redundant. At the same time, he never loses focus on Jacobson’s nuanced and finely detailed dialog. The net result is an economic energy flow, with a perfect regulation of current that is always channeled to where it’s needed.

As Warren and Brown submerge into the darkest depths of their roles, they come to confront both the ramifications of their vice officers’ charade and what their performances reveal about themselves as real people, a process that finally questions whether there is a difference—whether there can be a difference, and whether there should have to be a difference—between being and doing. As the many threads of The Twentieth-Century Way are braided back together, Brown avers to Warren (playing Herbert Lowe in this moment) that one can be persecuted only for doing, not simply for being. But he knows before the words leave his lips that Lowe is right to disagree. When he speaks his next line, he speaks for all of us who, a century after this unholy chapter in American history, continue to fight the ghosts of history still haunting us today: “We’ll change the world and make it true.” All of us, improvisational actors in the performance of life, construct the plot as we go.

But not always for the better. Not only did Special Vice Officers W.H. Warren and B.C. Brown. ruin dozens of lives, but their efforts directly contributed to California’s officially criminalizing sodomy in 1915. “Imagine it,” Warren marvels, “actors changed the world!”

The Twentieth-Century Way is a penetrating study of those changes and a clarion call for authenticity and freedom. In our 21st century, if we live and let live without shame or shaming, we will have learned well from the mistakes of our past.

These particular mistakes were made right here in Long Beach, a city that has come further than most in terms of LGBTQ rights. That’s two reasons why Long Beach is the perfect city The Twentieth-Century Way. Long Beach Playhouse’s superb presentation makes it a triumvirate. See this play.