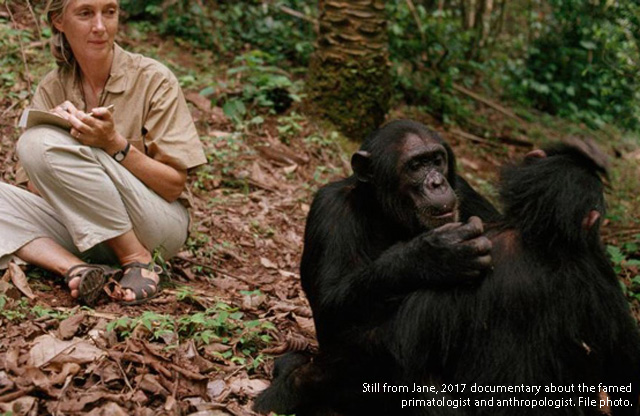 Beginning Earth Day weekend and extending into May, venues through the Los Angeles Harbor Area and Long Beach will be hosting film festivals. At San Pedro’s Warner Grand Theatre, the Palos Verdes Land Conservancy will be hosting a screening of Jane, the critically acclaimed National Geographic documentary about Jane Goodall’s commitment to preserving land for chimpanzees. This screening will take place at 5 p.m. April 21 after beautification activities at the White Point Nature Preserve and a guided ranger walk.

The Art Theatre in Long Beach is hosting the Earth Day Film Festival on April 21 and 22, featuring  the International Ocean Film Tour,  Straws,  A Plastic Ocean and An Elephant Love Story.

The International Ocean Film Tour will be featured on April 21. The film features the best ocean adventures, water sports and environmental documentaries of the year. Following the screening, the film’s producer Henry C. Lystad and interim vice president of husbandry and curator of fish and invertebrates at the Aquarium of the Pacific, Sandy Trautwein will lead a Q-and-A after the film.

On April 22, Straws will be presented at 10:30 a.m. followed by a  Q-and-A with Primal Alchemy caterer Chef Paul Buchanan, John Sangmeister of Gladstones and Long Beach resident, Steve Rice, who collects thousands of discarded plastic straws every month. Straws highlights a continuing effort to promote a local initiative which encourages Long Beach restaurants to educate diners on the harmful effects plastic straws have on the planet.

Also on April 22, A Plastic Ocean, will screen at 11:30 a.m. In the adventure documentary, a team of international scientists reveals the causes and effects of plastic pollution, followed by a  Q-and-A with a Long Beach youth panel.

Language Film Fest is launched with a lecture by Gregorio Luke titled, Gay Greatness at 6 p.m., April 19 at the Carson campus, in Room T-1200. Luke is an expert in Latin American art and culture. His talk celebrates the accomplishments of the LBGTQ people in art, history, and culture.

Luke, an accomplished speaker and scholar was named 2010 Artist of the Year in Long Beach. He is the former director of the Museum of Latin  American Art and cultural attaché of Mexico in Los Angeles.

Contracorriente (Undertow) screens at 6 p.m. April 27 at LBCC’s Pacific Coast Highway campus in Dyer Hall. Winner of the World Cinema Audience Award at Sundance 2010, Contracorriente deals sensitively and elegantly with the dilemma faced by those who find themselves in love with two people at the same time. When those loved ones are of different genders, the emotions become even more conflicted.

A discussion led by Eric Carbajal, professor of Spanish American literature and culture at California State University Fullerton will follow.

Tschick (Goodbye Berlin) shows at 6 p.m. May 4 at the Carson campus in Room D-135. A 2016 German comedy-drama depicts two teenage outsiders from Berlin who go on an eccentric road trip through East Germany during the summer holidays. Following Tschick will be a discussion by Robert Blankenship, assistant professor of German at California State University Long Beach.

Mine Vaganti (Loose Cannons) shows at 6 p.m. May 11, Carson campus room D-135. In the 1960s on a trip home from Rome, Tommaso decides to tell his parents the truth about himself. But when he is finally ready to come out in front of the entire family, his older brother Antonio ruins his plans.

A discussion follows the film with Dr. Leonilde Callocchia, cultural attaché at the Italian Cultural Institute in Los Angeles.

Close Knit is featured at 6 p.m. May 18 at the Carson campus, Room D-135.  The  film is about a daughter neglected by her mother, a gentle uncle and his transgender lover, an angsty boy who recognizes a sense of himself as gay. A warm “knitting” reorganizes unconventional family.

Chavela will screen at 3 p.m. May 19 at the Carson campus in Room T-1200. Mexico’s most beloved lesbian Rancheras icon, Chavela Vargas is a rebellious, solitary and profoundly wounded trailblazer. This lyrical love letter interweaves never-before-seen interview footage and mesmerizing musical portraits of Chavela’s most famous soul-gripping songs. Chavela is followed by a discussion with Gregorio Luke.

The last day of the festival, May 19 at 3 p.m. there will be a live mariachi performance by Mariachi Acoiris.