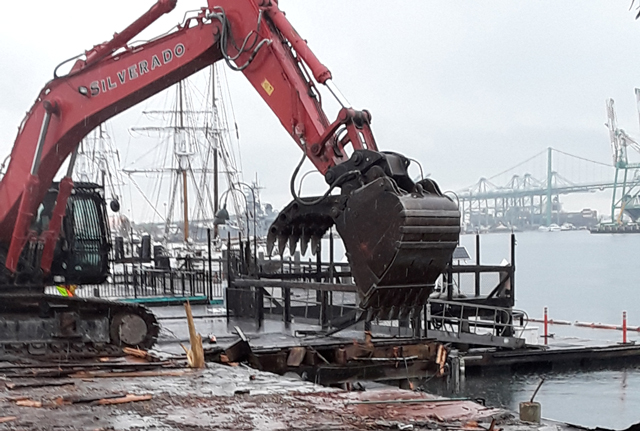 Six months ago, the Port of Los Angeles Executive Director Gene Seroka, agreed with my suggestion to hold a public meeting updating the harbor community on the various waterfront plans and projects. I even offered to help him plan it.  The date was postponed at least six times and was finally held March 20 at the Warner Grand Theater, the site of the last presentation on the Ports O’Call development.

People have been waiting a long time for this “update” with considerable misgivings and misinformation abounding. A curious crowd of 800 people showed up. This time there were some 50 demonstrators marching outside, calling into question the eviction and intended demolition of the popular Ports O’Call restaurant. The port’s public relations team was noticeably on edge, having expected an overwhelming positive response. That is not what this very well-crafted PR presentation received.

Just one week before, at the San Pedro Chamber of Commerce’s Economic Development committee, chairman Tim McOsker called the meeting to order with the admonishment that this was neither the forum nor the venue to debate the issue of Ports O’Call evictions or development even though two presenters on the agenda were the port’s  Director of Waterfront and Commercial Real Estate, Mike Galvin and Alan Johnson of Jerico Development. Both gave only limited oral reports on what was presented in previous meetings and one week later in full widescreen formats.

There was no discussion of the salient points of this development, silence on the growing criticism and only one remark from Mr. Johnson, who has stayed mute on this for months, on why the entire waterfront is being demolished.

“It’s in the [2009] EIR,”  he said, which according to some is a patently wrong reading of the document.

Only later when Elise Swanson, the director of the Chamber of Commerce addressed the issue of the 150 displaced workers (and by my estimation it’s probably double that number when you add up Acapulco, the Asian Village, the 20 village shops and Ports O’Call Restaurant) I questioned why the businesses were not offered relocation fees to move into the downtown business district. Her response resembled someone expressing aghast that they should be given something “for free.”  A curious remark, in as much as the San Pedro Market Place team is receiving five years of free rent on an unheard of 65-year lease. No one raises an eyebrow about such largess.

While McOsker, who is also now CEO of AltaSea, may be right that chamber’s Economic/Development committee doesn’t have purview to decide much, it does retain its standing as an unofficial arbiter and influencer on all things related to development in San Pedro. As such, it has often been the place where projects and proposals go before the general public even gets a hint of what’s in store and where developers and government officials go even before coming before the neighborhood councils — governing bodies that actually have standing in the City of Los Angeles. These meetings are only open to chamber members or invited guests. These meetings have become a platform from which a few in the business arena are able to manufacture a kind of consent based upon very limited perspectives.

On Jan. 11, two months before either of these meetings took place, the public spoke out against the demolition of Ports O’Call, the eviction of the small shop owners, the lack of transparency and the dislocation of workers (a kind euphemism for losing their jobs due to development). At that time, Mr. Galvin said that the retention of any tenant was at the sole discretion of the developers — a statement that he later retracted at the Central San Pedro Neighborhood Council meeting in February.  What was not revealed at this meeting was that Ports O’Call Restaurant had been in negotiations since at least December 2017 (and possibly as far back as October 2017) over their continued operation and inclusion in the development. But nothing was said publicly, nor would it be revealed until an eviction notice was served on Jayme Wilson at Ports O’ Call Restaurant at the very same time that he received a Letter Of Intent from the Ratkovich group, the senior partners of the San Pedro Market Place.

Now, I’m not a big believer in magic, but this appeared to be a poor imitation of a sleight-of-hand trick by the port to not include this tenant or any tenant that they deem unacceptable to remain on the waterfront — regardless of community support. This became even more obvious when it was later revealed that some seven current tenants have been just as magically chosen to remain while others have not. This does not resemble the original promise made by both the port and developers at the first public meeting a few years ago when the Ports O’Call development was proposed “in stages” and promises were made that businesses would remain open and then moved when work was to begin.  Oddly something changed last summer. But at this point, neither the port nor the developers will admit to exactly what changed.

What is even more concerning to me is how those who owe a certain fealty to POLA either by patronage, lease holdings or charitable donations are quietly manipulating the discourse on this very significant development and silencing any form of dissent or public debate.  POLA, with its new “waterfront partners” can exert the same kind of influence with commercial real estate development that it has had for the past century with international trade and cargo infrastructure development. Everywhere except at neighborhood councils or unaffiliated groups.

What is called for here is a new Citizen Advisory Panel on Port Development, made up of neighborhood councils and not the chambers of commerce nor others loyal to the port in any form. It needs to be independent of Council District 15 and the Los Angeles City Council. This has been needed ever since the port canceled the previous Port/Community Advisory Committee (PCAC) unilaterally.

Regardless of what some Chicken Littles in the area are exclaiming about the consequences of stalling the San Pedro Waterfront development at this point — in particular the Ports O’Call Restaurant bungled deal — the real success of economic development lies in the hands of both AltaSea and the newly announced SpaceX deal proposed for the Southwest Marine Shipyard site across the main channel.

Where the San Pedro Market Place may only create some 700 mostly service jobs when fully built out — this according to Eric Johnson of Jerico development — the other two projects are bound to bring in three times that number of much higher paid positions. And that’s the real promise of the future of waterfront development — the creation of high-tech, green jobs that create a second industry based in the San Pedro Bay.

Now that’s a public discussion that’s worth having.

Eternity Resounds in the Invention of Morel

Shrouded in Doubt: The final fate of Ports O’Call Restaurant