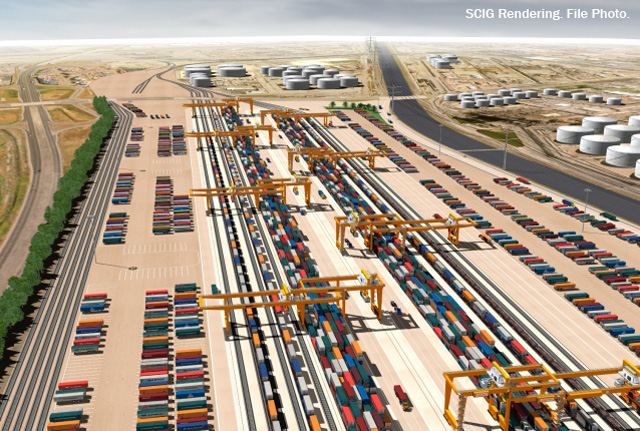 On Feb. 21, petitioners challenging BNSF’s railyard project in West Long Beach filed an appeal to the California State Supreme Court charging that an appeals court ruling represented a “subversive approach to CEQA,” the California Environmental Quality Act, by failing to assess the true impacts of growth on the project. Two other significant breaks from established CEQA law could set troubling precedents for future projects.

The environmental impact report (EIR) for the Southern California Intermodal Gateway, or SCIG, was approved by the Port of Los Angeles on March 7, 2013, and by the City Council on May 8, 2013. But it was challenged by an unprecedented alliance of plaintiffs—including the California Attorney General, the South Coast Air Quality Management District, the City of Long Beach and its school district, and nearby residents and environmental justice organizations—who successfully sued to have the EIR redone in a 200 page ruling handed down on March 30, 2016. AQMD has never been involved in such a suit before. Long Beach City Attorney Michael Mais told Random Lengths it was unusual, if not unprecedented, for Long Beach as well.

That ruling was partially reversed by an appeals court on Jan. 12, but the parties who brought the suit claimed that the ruling raised alarms that went far beyond just this specific case.

“The court’s Opinion not only creates a split in long-settled CEQA law, but also raises fundamental legal questions about public agencies’ duty to fully inform the public about a project’s environmental impacts,” the appeal said, adding elsewhere that the appeal court’s analysis represented a “subversive approach to CEQA.”

“We were pleased that the appellate court ruled in our favor regarding air quality impacts,” said Chris Eftychiou, spokesman for the Long Beach Unified School District, one of the plaintiffs in the case. “That aspect of the ruling alone was enough to prevent the project moving forward, so the appellate ruling was a victory for our school children,” he said. “The school district operates numerous schools adjacent to the proposed project site and its transportation corridor.”

But deeper problems remained, according to Ramya Sivasubramanian, an attorney with the Natural Resources Defense Council.

“On three issues, we felt that the Court of Appeals got wrong what the trial court had actually gotten right,” Sivasubramanian told Random Lengths. The issues involved traffic, noise levels, and the overall growth impacts. But each issue also involves a bizarre twisting, if not break, with existing law that would set troubling precedents for future projects and litigation.

On the traffic issues, she said “The EIR had what the other side also admits was missing data,” which was unheard of in itself. Yet, “Somehow, this missing data notwithstanding, they found that adding thousands of container trucks to a city street would not significantly impact the traffic on that street.”

The street, San Gabriel Avenue, has just two lanes. Daily truck traffic would reach approximately 2,771 trucks a day by 2035, so there was good reason to question the EIR’s missing data, but, “The Court of Appeals affirmed their conclusion by assuming that that missing data exists,” Sivasubramanian said, “and that the missing data actually supports this conclusion that thousands of trucks added to a small city street would have no significant impact on traffic there.”

In another twist, “The court further authorized the agency to correct their analysis, but affirmed the conclusion. So there’s actually no preceding in which the agency can later correct that.”

The handling of the noise issues was equally bizarre. The EIR adopted a specific standard from the Long Beach Noise Ordinance, known as Lmax, as its key threshold of significance. Anything over that would have to be mitigated. As the appeal notes, Lmax “is the most rigorous methodology for analyzing noise impacts because it assesses a project’s loudest sounds—day or night—rather than simply considering ‘average’ noise.”

“But, somehow, despite adopting that threshold, it later used a different … methodology for assessing the noise impacts,” Sivasubramanian explained. “So they’re really not doing what they said they were going to do.”

The appeal says, “clear guidance is needed from this Court that an EIR must apply its adopted thresholds and disclose and mitigate the significant impacts its analysis reveals.”

It seems surprising that this isn’t already settled law, but perhaps no one’s ever tried such a blatant bait-and-switch. “It’s certainly not something that I have ever seen,” Sivasubramanian said. “They selected the threshold and then didn’t really use it.”

But the issue of growth got even more bizarre, with an expansion of capacity presented as neutral, if not a reduction—since trucks will be driving fewer miles per container, by diverting them from BNSF’s existing Hobart railyard near Commerce.

“The EIR refuses to analyze any increase in capacity resulting from SCIG by playing a shell game with growth,” the appeal says. “It concedes that SCIG will create the capacity to handle 1.5 million cargo containers each year. But it defines this capacity as cargo already going to Hobart.”

While it’s arguable on a trip-by-truck trip basis, this ignores the fact that Hobart will still be there (and the 710 Freeway expansion is still being pursued, which will facilitate it). The appeal continues: “The EIR then dismisses the projected growth in cargo at Hobart (which will immediately refill) as caused by ‘market demand’—not SCIG—and thus exempt from CEQA review.”

However, Sivasubramanian explained, the opinion’s endorsement of the EIR’s ‘market demand’ excuse conflicts with CEQA’s most fundamental principles. All growth results from market forces, but it’s only when projects are approved through CEQA review that their impacts can be assessed and mitigated.

“You cannot get around analyzing the project just by claiming that the impacts are attributable to market demand or market forces,” Sivasubramanian said. SCIG doubles BNSF’s capacity, she pointed out,  “which obviously has an impact on market demand. That doubling of capacity means it needs to be analyzed.”

As explained in the appeal, “Even where it is unclear whether the approved level of development will actually materialize, CEQA requires lead agencies to analyze the full magnitude of potential development allowed by the approval.” It went on to cite court decisions including city annexations, general plan amendments, and rezones.

While the Port won’t admit it, the impacts of the Southern California Intermodal Gateway will be significant, as would the impacts of the appeals court ruling, if left to stand. Whatever decision eventually comes down, it could be the most significant case the harbor area has seen since the China Shipping Settlement was signed in 2003.