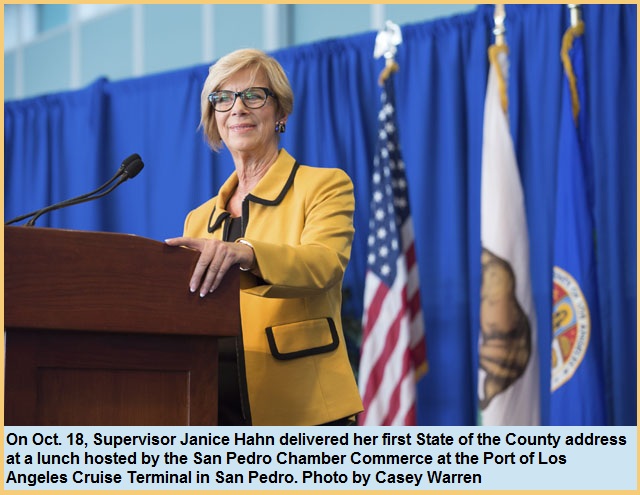 Los Angeles County Supervisor Janice Hahn brought together 600 of her 4th District’s elites for what might be considered a bipartisan power luncheon benefiting the San Pedro Chamber of Commerce at the World Port Cruise Center.

It has been five or more years since this many of the local movers and shakers gathered in a somewhat awkward kumbaya moment to hear what ostensively was a positive spin on the “State of the County” by the female heir to the legendary Kenny Hahn. His name, she reminded the audience, graces the county hall where she sits behind her father’s same desk.

“I cut my political teeth in a non-partisan office and I will admit that I was not wholly prepared for the level of partisanship that had taken over Congress when I arrived in 2011 and it only went downhill from there,” she confessed, which is kind of a strange statement coming from someone of notoriously Democratic Party lineage. But it is true, Janice does bring an odd collection of people together. Even to the extent that none other than former Los Angeles City Councilman Rudy Svorinich greeted me with a friendly, “Can you believe how crazy this town has gotten lately?” He said he was amazed at the reaction of “some people” to the homeless problem here.

There was of course Janice’s brother and former mayor, Judge James Hahn, amongst the 64 elected honorables in attendance and his former chief of staff, Tim McCosker, now chairman of the San Pedro Chamber of Commerce. McCosker appeared to be the prime mover in shaping this event.

But the thin veneer of bipartisanship seemed quite incredulous when Hahn hailed the efforts of Councilman Joe Buscaino for “getting 160 new units of housing for those previously homeless built in Harbor Gateway!” This, considering that the councilman (who has been called a Democrat in name only) has not done much more than chase the homeless around his district for the past five years without addressing the core issues of homelessness as a crisis has unfolded.

After explaining the $30 billion county budget and her recent actions to vaccinate at-risk populations against Hepatitis A, Hahn noted that, “The biggest obstacle facing us is not a lack of funding, but NIMBYism and a lack of willingness by communities to take on a fair share of the problem.”

This is something Buscaino has refused to address since the tiny homes episode two years ago. None of the development projects currently slated for the San Pedro area include any affordable or low-income housing component, something that Hahn has insisted upon for the courthouse development site on 6th and Centre streets.

This puts Hahn at odds with Buscaino in an under-the-radar negotiation about the future of downtown San Pedro over this prime central development site just at a time when the online commercial real estate news outlet, Bisnow, is pushing the Los Angeles development community to support AltaSea and the LA Waterfront Alliance’s Ports O’ Call development. Bisnow hosted an $89 per person breakfast at the Topaz building the day after Hahn’s speech in San Pedro. Hahn says, “This [homeless issue] is a shared problem and it demands a shared solution. There are 58,000 people in LA County who need homes. No one community will bear the burden of housing all 58,000, but no community can house zero either.”

The challenge is that if we can’t significantly begin to address the homeless crisis with real solutions now we may never be able to overcome the negative designations and self-deprecations broadcast by Bobby Nizich and John Papadakis. They continue calling San Pedro “a slum” or worse. All eyes are now on the AltaSea project as being the focal point of innovation and the spark for waterfront development.

Also not addressed by Hahn are the evictions of Ports O’Call tenants, which will kill a couple dozen businesses and send hundreds of workers to the unemployment lines. It comes as San Pedro’s wheel of fortune is spinning slowly toward added development that Buscaino has wanted for years. The only new housing project that is actively being built is one by the Holland Group at Palos Verdes and 5th streets, just across from the Port of Los Angeles offices — constructed with non-union labor in this very pro-union town.

The 2.45-acre property, located at 550 S. Palos Verdes Street, is entitled for a mixed-use development that would feature 404 residential units atop 5,200 square feet of street-fronting commercial space. These are the very same developers who won the request for proposals for the San Pedro Courthouse site. Their first project will not address the homeless people camped out just a few blocks away, but the courthouse may.

While Hahn now has to address the needs of a district 10 times the size of her former council district, she does have at least that many times the budget to address the big issues of economic development, the LA Metro, pipeline safety issues along with the homeless crisis. The challenge will be how well does this get done?

A footnote to San Pedro development aspirations is the conviction of the Nelson One project developer Richard Dean Lamphere this past week related to multiple charges in connection to a real estate fraud case in Solano County, including grand theft by embezzlement.

Lamphere’s proposed 15-story residential high-rise project on one of the narrowest streets in town was heralded at a past Chamber luncheon by none other than Buscaino in a surprise announcement. It now looks doubtful that this project will get built.

In the end, Hahn’s state of the county speech put a positive spin on the future of the county that is now dominated by four female Supervisors and four Democrats — not very much bipartisanship needed when you only have to convince two other people to get what you want done in your district.

When asked about POC merchant evictions, Buscaino turned away saying, “Email me your questions.”