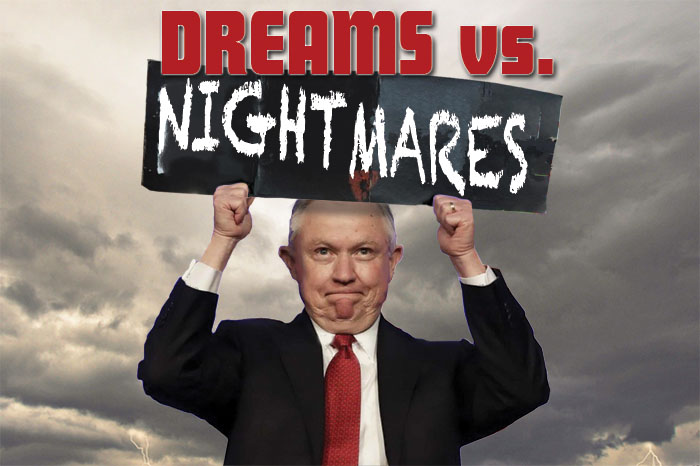 While running for president, one of Donald Trump’s key campaign promises was to end DACA “immediately.” On Sept. 5, after almost nine full months, “immediately” finally happened — sort of. U.S. Attorney General Jeff Sessions made the announcement, which would be effective in six months. But the very next day, Trump reversed himself — or at least created mass confusion — by saying he might extend the effective date further, if Congress failed to act during those six months.

DACA, Deferred Action for Childhood Arrivals, is a 2012 executive order by President Barrack Obama that protects some 800,000 undocumented immigrants, who were brought to America as children. They’ve become known as “Dreamers” — as in the American Dream — and DACA has become broadly popular, since the idea of punishing children for their parents’ actions doesn’t sit well with most Americans, even many with strong anti-immigrant hostility.

That general sentiment — plus more than a decade of sustained grassroots activism — helps explain the overwhelming response against DACA repeal, both in public statements and mass demonstrations nationwide. Tens of thousands of people took to the streets in Los Angeles, San Francisco, Phoenix, Denver, Minneapolis, Detroit, New York, Washington, D.C. and elsewhere.

Religious, political and educational leaders spoke out as well. The unanimity of response marked a significant milestone. The history of immigration struggles has usually seen  a significant gap between what community-based organizations and activists want, and what politicians are willing to consider. Now, however, that gap seems to have almost vanished. In a perverse way, Trump has managed to bring people together, after all.

“These Dreamers are Americans in their hearts, in their minds, in every single way but one: on paper,” former President Barack Obama said in a statement. “It’s up to members of Congress to protect these young people and our future.”

“President Trump’s action on DACA is cruel — it threatens to tear families apart, puts our economy at risk, and will do nothing to unify America or make us more secure,” Los Angeles Mayor Eric Garcetti said in a statement. “DACA recipients are all of us: teachers, students, business owners, young people thinking about starting families of their own in the only country they know: the United States. They belong here. And we’ll fight for them to stay.”

“The cancellation of the DACA program is reprehensible,” the U.S. Conference of Catholic Bishops said. “The Church has recognized and proclaimed the need to welcome young people: ‘Whoever welcomes one of these children in my name welcomes me; and whoever welcomes me does not welcome me but the one who sent me’ (Mark 9:37). Today, our nation has done the opposite of how Scripture calls us to respond.”

“The administration is at odds with what the majority of Latino evangelicals have endorsed for over a decade,” said Rev. Dr. Gabriel Salguero, president of the National Latino Evangelical Coalition. “Congress must pass legislation protecting DREAMERS immediately.”

California’s higher education leadership sent a joint statement to Congress urging legislators “to immediately enact the bipartisan legislation that will protect our nation’s Dreamers.” Leaders of the University of California, California State University, California Community Colleges and the Association of Independent California Colleges and Universities joined with California Superintendent of Public Instruction Tom Torlakson in calling for congressional action, and condemning Trump. “We are deeply disappointed by President Trump’s callous and misguided decision…. This is a step backward for our nation — a nation built by immigrants,” they wrote.

UC President Janet Napolitano, was secretary of Department of Homeland Security from 2009 to 2013 and oversaw the creation of the DACA program in 2012.

“Neither I, nor the University of California, take the step of suing the federal government lightly, especially not the very agency that I led,” Napolitano said. “It is imperative, however, that we stand up for these vital members of the UC community.”

A growing number of states are filing suit as well.

All this is taking place against a background in which public opinion is strongly on the Dreamers’ side.

Efforts to reform immigration have been bifurcated throughout the 21st century. On one hand, attempts at comprehensive immigration reform try to synthesize different issues and advocacy positions into one giant piece of legislation; on the other, smaller stand-alone efforts try to deal with specific pieces of the problem.

The Dream Act — the legislative version similar to the DACA policies — was first introduced in 2001, with bipartisan authorship, and is the most significant and persistent example of those stand-alone efforts. But the fact that it could not be passed by Congress shows how difficult politics have become. In 2010, it was passed by the House of Representatives, but five Senate Democrats failed to support it in a cloture vote. So it died, despite having majority support in both houses of Congress.

At the time, Obama was still trying to court Republican support, and had actually surpassed George W. Bush in the number of immigrants deported. Initially, activists had been reluctant to criticize him, but as the efforts to work with Republicans proved futile, activist criticism intensified. Some began referring to him as “deporter-in-chief” as early as 2011. The criticism intensified throughout the election cycle, and eventually Obama enacted DACA as an executive order in June 2012 to protect the subgroup of young immigrants, even as the level of deportations remained high in comparison to pre-2000 levels. As a result, many continued to call Obama “deporter-in-chief,” including Democratic Rep. Luis Gutierrez, who has used the term more in sorrow than in anger.

If Democrats fumbled their effort to pass a special, targeted immigration bill, Republicans preceded them, fumbling a sweeping effort in 2005/6, when they had control of government.

In December 2005, the House passed the Border Protection, Antiterrorism and Illegal Immigration Control Act, commonly known as the Sensenbrenner Bill, for its sponsor, Wisconsin Republican Jim Sensenbrenner, by a vote of 239 to 182. It was supported by 92 percent of Republicans, opposed by 82 percent of Democrats. Sensenbrenner dealt with a wide range of specific issues but the most toxic made it a crime to assist an illegal immigrant to “remain in the United States.”

House passage of the Sensenbrenner Bill touched off a wave of protests which thoroughly derailed it in the Senate and helped fuel the Democratic wave which retook the House for Democrats in November 2006. The first big demonstration in Chicago had more than 100,000 on March 10, but demonstrations erupted nationwide on May Day, with more than 500,000 people turning out in Los Angeles.

At the time, labor journalist David Bacon, author of books The Children of NAFTA and Communities Without Borders, spoke with Amy Goodman on Democracy Now! about how U.S. immigration struggles fit into the global economic picture, and how working class communities were redefining the terms of struggle for themselves in sharp contrast to political leaders.

“For the first time, I saw lots of people carrying signs that said ‘no guest worker programs,’ and this is, I think, different and something that went beyond what we’ve seen before,” Bacon said.

“Because, really we’ve been told now by Congress for quite a while that the only alternative to the odious Sensenbrenner Bill — which would criminalize 12 million people — is to allow Congress, the Senate specifically, to pass enormous guest worker programs and, in fact, force people who are here without papers to become guest workers as the price of legalization. And there were many, many people, including speakers up on stage also condemning this idea.”

This marked a clear break with Washington-centric politics.

“Really, what’s going on here is that the trade agreements, like NAFTA, and this neoliberal free trade regime [are] displacing enormous numbers of people around the world so that, worldwide, there are about 170 million people living outside the countries in which they were born, and overwhelmingly this is due to the kind of enforced poverty that this free trade regime is producing,” Bacon said.

That system came crashing down with the Wall Street collapse in 2008, but even then neo-liberal ideas continued to dominate almost all issues in Washington except — tellingly — this aspect of immigration. This shows immigration activism among the first to free its thinking from putting people into boxes as commodities, and recognizing them as full human beings first and foremost.

The fact that all manner of elite leadership now — politicians, educators, even business leaders — have come around to defending Dreamers using similar language and expressing similar attitudes is a testament to the power and persistence of a movement for human dignity that’s made enormous progress over the past decade, since May Day 2006, and the defeat of the Sensenbrenner Bill. We’re still a long way from passing something truly humane in its place — not just a Dream Act, but a comprehensive bill providing for all. But the terms of debate have undeniably shifted, and whatever happens next, the long-term shift in thinking will only grow stronger over time.

TRUMP, INC.: What the Trump Campaign Is Up To on YouTube (Hint: It Involves Aliens, Bin Laden and Ivanka)