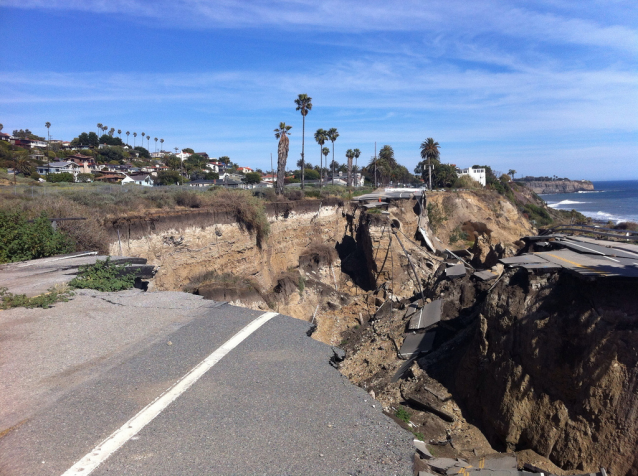 A little more than 50 residents came out for the May 3public comment meeting on the recently released draft environmental impact report to restore Paseo del Mar roadway.

It’s been 5 1/2 years since heavy rains abruptly helped turn one of California’s scenic routes into a cul de sac following a 2011 slide.

Residents were critical of the 30-day public comment period for the Notice of Preparation, believing it gave the public insufficient time to evaluate the preparation of the draft EIR.

Another area of concern was the baseline conditions on which the project was based. The Bureau of Engineering elected to set baselines conditions to 2011, after the slide, rather than at the time of the release of the notice of preparation, which was released in 2016.

The Bureau of Engineering said in the draft EIR that the baseline conditions for the proposed project consider the pre-landslide conditions as well as the emergency stabilization measures taken since then. This wasn’t a satisfying answer for many residents.

Neighbors who complained of traffic spoiling ocean views and quiet benefitted from an act of God were one camp. Motorists who leave the peninsula for work experienced heavier traffic than they were accustomed. They mostly fell into the camp which favored restoring the road. This was especially true as traffic got heavier with the introduction of Mayor Eric Garcetti’s Great Streets Initiatives and the advent of bike lanes.

Following the 2011 slide, the city initiated studies, cleanup and stabilization measures and built a street turn-around near the intersection of Paseo Del Mar and Weymouth Avenue while the western end of the project site was fenced off.

Initially, there were three options on what to do about the slide:

Cutting into the White Point Nature preserve has since been nixed from the discussion following vociferous outcry from the Preserve’s supporters over the years.

The Bureau of Engineering is considering three alternatives for Paseo del Mar’s permanent restoration, plus a no project alternative.

Alternative 1 aims to limit major earthwork and remediation of the slide area by constructing a single long-span bridge supported on stable ground outside the limits of the landslide area. A cast-in-place concrete box girder or double box girder bridge superstructure would be utilized supported by seat abutments. The bridge span would be about 400 feet long and 63 feet 5 inches wide. The bridge proposed under Alternative 1 would be about 130 feet above the beach level.

Alternative 2 aims to build a roadway that sits atop a single row of large diameter, cast-in-drilled holes with a buttress. The cast-in-drilled holes would be at the edge of the existing slope. Landslide debris will be removed to about 75 feet above the beach. The piles would be connected with a reinforced concrete grade beam and tied back with soil anchors. A reinforced earth buttress above the piles would stabilize the head scarp and support the new roadway. The Bureau of Engineering said the slope below the 75-foot elevation level would be relatively undisturbed by the construction of the pile supports. A lot of residents at the May 3 meeting didn’t buy it.

Alternative 3 is similar to Alternative 2, except rather than being at the face of the existing slope, a row of large diameter piles and a grid of smaller diameter piles would be constructed below the proposed roadway. The piles would handle the vertical loading of a mechanically stabilized embankment wall, or MSE, and mitigate lateral forces on the existing slope. Due to the height of the wall required, traditional cantilever-type walls would not be as stable. The MSE-type wall utilizes a reinforcement strap tied to a segment of wall panel. The self-weight and friction of the compacted earth would keep the face panels in place. The slope below the 75-foot elevation would be relatively undisturbed by the construction of the pile supports. A concrete wall would be constructed above the 75-foot elevation.

The comment period on these options ends on June 6, if the Bureau of Engineers does not extend it for another 30 days.

Facebook
Twitter
Email
Print
Previous articlePin Up , Don’t Shut Up
Next articleCultivating a Rose Amongst the Concrete