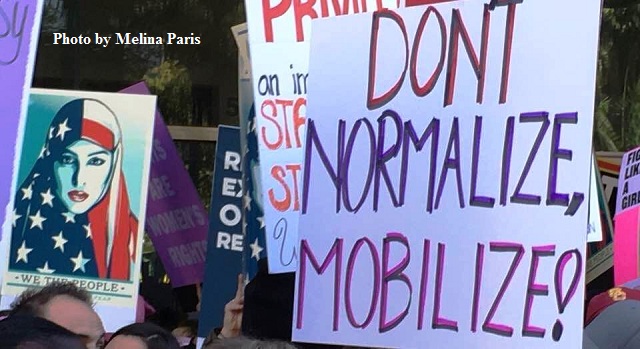 This Is A Movement

On Jan. 21, an estimated 750,000 demonstrators converged on downtown Los Angeles for a local contingent of the world-wide Women’s March.

The demonstrators shattered organizers’ expectations with a crowd of 80,000 people. By official count, attendance of the Los Angeles ‘sister march’ dwarfed the central march in Washington, D.C. The estimated crowd there topped out at 500,000. 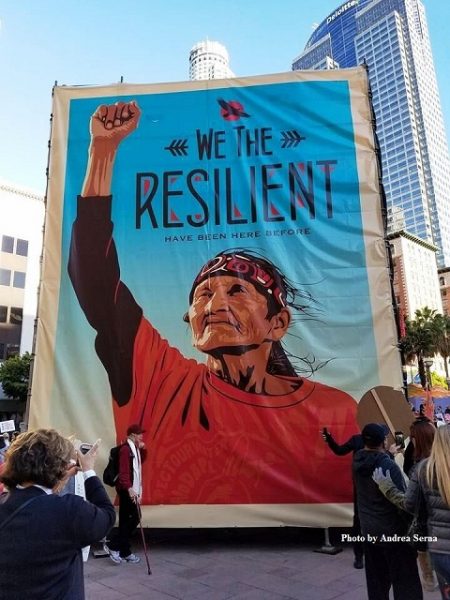 Individual motivations for marching varied from general anti-Trump sentiment to specific criticisms targeting the “predator-in-chief’s” platforms on health care, immigration, the Dakota Access Pipeline and reproductive rights. Many marchers reported feeling frustrated at the proposed policy implementations. They viewed this march as a way to voice their dissent on issues.

Marie Rios, a Long Beach public school employee, discussed the hostility generated from Donald Trump’s policies on immigrants, or, as he has renamed them, “removable aliens.”

“I work at a school and we did have issues with some of the kids at the school [asking], ‘Am I going to be deported?’” Rios said. “The kids were scared.”

Due to the atmosphere of fear perpetuated by the Trump administration, many sources declined to give their names during interviews. Even those who did give their names were wary, knowing that cell phones and social media have been used to target protesters, including those at Standing Rock.

“[It’s] very scary,” said Gilberto Ruiz-Ortega, a supporter at the Women’s March in Los Angeles. “My mom is a software engineer…. The way these systems are built people have access to this information.”

Many protesters, including 48-year-old Long Beach resident Laura Butler, turned off their phones to prevent being targeted by law enforcement. The marchers’ wariness illustrates that the president’s actions have resulted in genuine distrust by the American people. In order to protect them, Random Lengths News complied with requests for anonymity.

However, other protesters had moved past fear to anger, especially regarding policy decisions that they felt targeted women.

“I’m not ready to go backwards in rights,” a fellow protester, who asked for anonymity simplified.

Instead of feeling isolated from one another as a result of political or ideological differences, marchers found strength.

“We are here in solidarity,” confirmed activist actress Gina Belafonte. “Women are the answer.”

This was true. However, before the march even began, it faced public criticism for a lack of diversity amongst its predominantly white organizers and speakers.

“It probably got organized by white women because they get listened to a little bit more,” said Liz Leigh, one of the protesters who shared that sentiment. “They’ve got the power.”

Other marchers found the leadership’s lack of diversity much more troubling as it signaled a continued lack of intersectionality in feminist politics.

The privilege given to white feminists was, of course, one of the major criticisms of feminism’s second wave in the 1960s and 70s. Fearing that the mainstream feminist movement remained mired in the second wave’s white privilege, many demonstrators struggled with whether or not they should even attend the event.

“I’m still struggling,” said one woman,  smiling reluctantly. “But for me, this morning I felt that it was still important to show up … vaginas are not always black or white. Now what happens, surrounding that and the politics of it may become black and white but today, we just have to show up and we have to fight the best way we can.”

“Feminism does have a long way to go in terms of intersectionality, but I don’t think that anything is solved by boycotting events that might have been organized by white feminists just because we’re saying these aren’t our issues,” Martinez said. “It’s resolved by having a dialogue. We won’t create representation for ourselves in these spaces by staying away by not showing up and having that open conversation.”

Some demonstrators felt that Trump’s unilateral oppression of women and minority groups strengthened the movement instead of fragmenting it.

“Everybody has been attacked,” said one demonstrator shaking her head. “[This is a protest for] anybody who has been marginalized in any type of way. I’m a child of immigrants; my mom’s gay, like, ‘What the fuck?’ I need to be heard and to have my life matter.”

More than anything, it seemed that marchers wanted a voice, a voice they felt was not being properly represented or heard in the White House.

“We’ve been being silent and nice for the past eight years and look at where we’re at now,” the same woman said. “[It h]asn’t really worked.”

Although many marchers felt that peaceful protest was the best way to voice their dissent, others were not sure how effective nonviolent protest could be in combatting the violence that lay in the language used by Trump.

“You don’t want to see violence being used to get your point across but sometimes it is necessary,” another demonstrator said. “Silence isn’t always heard.”

She was referring to the more aggressive protests that had taken place during and after the inauguration, in which a limousine was set on fire and alt-right pundit Richard Spencer was punched in the face.

Similarly, Monessa Overbey, 84, remained skeptical about the positivity of the march.

“We had a political revolution and the next step is a violent one,” she warned.

A UC Riverside student thought that any violence would come from conservative backlash to the march.

Demonstrator Dannah Perez added her own thoughts to the conversation.

“I was prepared today,” Perez said. “I brought goggles and I brought things to cover my face because I am fighting for freedom.”

Organizers sensed the tension of the crowd, repeatedly urging attendees to “stay peaceful; stay positive” over the loudspeakers. To lighten the gravity of the issues, organizers joked with attendees as they waited patiently for the police to clear a path from Pershing Square to City Hall that would accommodate the unexpected turnout.

“We’re going to change the name [from ‘march’] to a ‘stand,’” one organizer laughed, nervously, as helicopters buzzed overhead.

Despite fears of attendees and organizers alike, the Women’s March remained peaceful, leading media outlets to tout its success via such self-congratulatory headlines as Millions of Marchers, Zero Arrests.

Perhaps the march’s ability to peacefully unite millions without police resistance makes it a success.

This has not been the case with other recent peaceful demonstrations. On Martin Luther King Jr. Day, more than 16 Dakota Access Pipeline protesters were arrested during a ‘prayer walk’ on charges of trespassing, inciting a riot and resisting arrest. Two days before the inauguration, another 21 pipeline protesters were arrested, putting the total number of arrests since August to more than 600. Most media outlets failed to report on the arrests in the days before the inauguration.

“I hadn’t even heard about it,” was one Long Beach resident’s response to the pipeline arrests, an ignorance she shared with the vast majority of people interviewed

“I wish someone would intervene on their behalf,” added Paul Ceron, 39.

But many marchers found the idea of intervention to be unlikely, viewing the media’s lack of coverage on the Dakota Access Pipeline arrests as symptomatic of a more systemic and more malignant problem.

“Erasure is step one,” Ruiz-Ortega said.

Unfortunately, the prophecy of erasure became all-too apparent in the days following the Women’s March. On Jan. 24, Trump signed an order allowing Dakota Access Pipeline’s completion. A slew of similarly regressive orders followed on Jan. 25, including the plans to begin construction of (another) wall along the U.S.-Mexico border and an order that targeted undocumented immigrants and stripped sanctuary cities of federal grant money. The Trump administration also suspended refugee migration from and visa programs with “Muslim countries,” requiring “extreme vetting” to allow persons from these countries into the United States. Such measures add ominous tension to the promise of the Women’s March Los Angeles Foundation, whose web slogan reads: “This is just the beginning.”

As a result of the increasingly repressive measures undertaken by the Trump administration, protesters cautioned continued vigilance to combat the rise of impending fascism.

If protesters have learned anything from previous movements, like Occupy Wall Street, it is that this infuriated solidarity must continue. More than that, this movement needs intersectional leadership who understand what feminism’s second wave failed to accomplish; it needs a coherent set of demands that listens to marginalized voices that scream:

“There is nothing more American than dissent.”

In the words of the millennial generation: “Stay woke.”