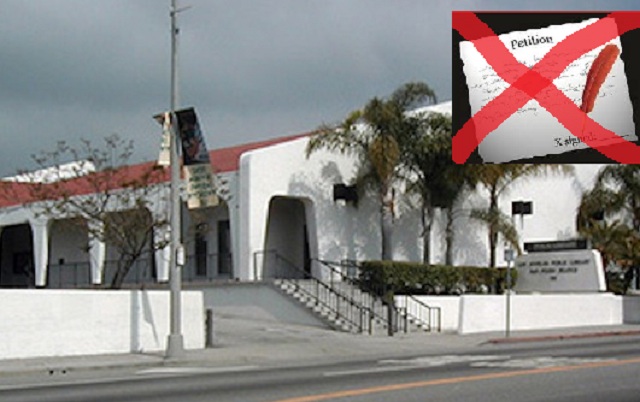 As some of you  know, I have filed papers to run for the Los Angeles City Council in the 15th District.  Those who know me best have asked, “What took you so long?”

Quite simply, I’ve been busy serving as an interested observer of this political circus for the past 35 years.

In that role, I kept a sharp eye out for those with enough fire-in-their–belly or enough patience for the nonsense to pursue careers at city hall.

My frustrations with the current occupant of the 15th District council seat comes down to a laundry list of complaints that I share with many community members with whom I have spoken over the past few weeks while gathering nominating signatures. I will share that list once my nominating petition is qualified and I’m placed on the ballot.

In the meantime, I’ll  share some of the impediments that are set up to discourage any  actual participation in the exercise of participatory governance.

The Election Division is in a nondescript industrial building off the 101 freeway east of downtown hidden behind Union Station on Ramirez Street at space # 300.  Without   MapQuest, you might not ever find it!

It is beyond my comprehension why there isn’t a City Clerk’s office in every district of the city. But this is just one of many hurdles to actually running for public office.

Another hurdle is the ethics commission’s myriad of conflict of interest forms—forms that once completed makes you feel naked and completely circumspect about running for public office.

When you are done with the forms, they hand you 100 blank nominating petition forms with instructions in 12 languages on three sheets that must be kept stapled together. You have less than 30 days (depending on when you filed) to gather a minimum of 500 signatures. At the time, I thought, “What could be simpler?”

After getting the nominating petition forms, I raced back to the Los Angeles Harbor to round up everyone I know to sign my petition only to find that a good half of the people in our district who could be registered to vote are not.

Around 40 percent of property and business owners here are registered to vote someplace else like Palos Verdes, Carson or Long Beach—not in of Los Angeles.

It begins to sink in that a lot of those who have financial interests in the city are not of the city, but have great influence over it.

The hunt for qualified registered voters is less daunting than Diogenes looking for an honest man in Athens. But it’s still a bit like searching for Waldo. The other option is using verified voter registration lists and going door-to-door like a Fuller Brush man.

Still, as the petition sheets are filled up and the confusion of who is and who is not a Los Angeles registered voter is sorted out, one of my canvassers informed that the librarian at the local library stopped him from collecting signatures on that property.

Then, he hands me the Los Angeles Public Library’s “Rules of Conduct.” There are 15 rules in all. Number 12 on the list prohibits “petitioning…without the express permission of the City Librarian.”

I was appalled by the Library Commission’s edict as it totally flies in the face of common sense. So, I called the local librarian and complained. I was then told that only “the top dog City Librarian” can grant me dispensation, like the Pope, to petition outside a city library for the privilege of running for a city office.

“Are you kidding me? What part of the First Amendment don’t you understand?” I asked incredulously.

This is the very public institution that is dedicated to support free speech, free press and that inherently supports the right to petition our government and yet they have a policy prohibiting it.

Ultimately, I got special permission from the main library to gather petitions outside a city owned public library.  But it was only after I made a very impassioned plea for some sanity to the Los Angeles Public Library that was I granted permission to canvas for nominating signatures on public property.

I will once again state my case. This was a First Amendment matter with free political speech, the right to petition our government and the free expression of these rights in the public domain at stake.

This matter is not just about my personal campaign. It’s about how the city itself stands in the way of public participation in our most cherished tradition of self governance.  That I, as an individual, have to “ask permission” from some distant bureaucrat to exercise our right of suffrage on public property is a fundamental abridgment of this right.

The real hypocrisy is that this is being done by an institution whose very mandate is the conveyance of free speech through literary offerings. Consider this a formal protest that must be addressed immediately.

These, my fellow citizens, are just some of the many issues that keep one from running for public office instead of sitting on the fence and watching the circus go by.