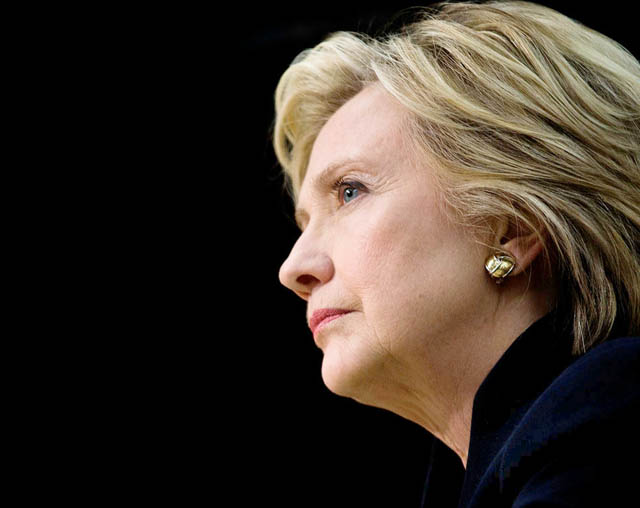 In 1872, Victoria Woodhull became the first woman to run for president of the United States. She was a candidate for the Equal Rights Party, campaigning on a multi-front progressive platform of women’s suffrage, regulation of monopolies, nationalization of railroads, an eight-hour workday, direct taxation, abolition of the death penalty and welfare for the poor.

In 1972, Shirley Chisholm—the first African-American woman to serve in Congress—became the first woman to run for president in the Democratic Party primary. Her platform was left of George McGovern’s.

This year, 144 years after Woodhull, Hillary Rodham Clinton became the first woman to run for president as the nominee of a major party.  Running on much more conventional — if still progressive — political positions, but still facing spectacular levels of visceral hostility, she was poised to become America’s first female president. She seems to have won a plurality of the popular vote, leading by more than 200,000 votes at press time. But Clinton lost by a total margin of 111,000 votes in three states where Democrats have won for decades: Pennsylvania, Michigan and Wisconsin, giving Donald Trump the Electoral College votes he needed for an unexpected victory. He performed significantly better than pre-election polls had predicted.  Third-party candidates took more than the margin of victory in all three states.

The results sent shockwaves around the world, with stocks plummeting and people pouring out their thoughts online.

“The unthinkable happened before, to my family in WWII,” Star Trek star and social activist George Takei tweeted. “We got thru it. We held each other close. We kept our dignity and held to our ideals.”

“When a man says he will forcefully deport 12 million immigrants in 2 years don’t tell me we don’t need an organized resistance,” Black Lives Matter activist and writer Shaun King tweeted.

“Q: How much of this result is about coastal complaisance with union decline?” independent journalist Marcy Wheeler (aka “emptywheel”) asked. “NV—Solid Dem win. Other key states—fuck you.”

“Efforts to weaken union power in the Midwest sure seem to have worked,” Vox’s Matthew Yglesias chimed in.

“The 2016 Dem primary, and specifically how it was tilted to Clinton by the machine, now becomes one of the darkest moments in party history,” tweeted David Sirota, of the International Business Times.

Locally, Nanette Barragán narrowly won the 44th Congressional District’s vacant seat by a 51-49 margin. Janice Hahn, who gave up that seat to follow in her father’s footsteps as a Los Angeles County Supervisor, held a commanding lead in her District 4 race against Steve Napolitano.

While Trump’s bigotry, vulgarity and childishness significantly inhibited public support for him by many in the GOP establishment, he continued to enjoy solid support in defiance of early expectations, thus allowing him to consolidate a base of voter support.

“I heard it from John Boehner a week ago,” said Nicole Wallace, former George W. Bush communications director, on MSNBC. “I said, ‘What’s your message as he’s out there, a private citizen now?’ ‘Hold your nose and vote for him [Trump], for the sake of the Supreme Court.’”

This logic connected with a broader Republican strategy of simply defying normal democratic norms. For a year they have refused to hold hearings on Barack Obama’s Supreme Court nominee. For decades they have manufactured “Clinton scandals” and then howled “cover-up” when they turn out to be nothing. This pattern repeated again with the bogus “email scandal,” and FBI Director James Comey’s unprecedented late October announcement suggesting that the FBI had uncovered some sort of new evidence only to say, “Nevermind” nine days later. There were widespread reports that an anti-Clinton clique of agents was responsible for pressuring Comey into this violation of Justice Department guidelines, which rules out doing anything to interfere in an election in the last 60 days.

The GOP’s third defiance of democratic norms is its strategy of voter suppression. Before the election a flurry of lawsuits addressed a significant reduction in places to vote. A report from The Leadership Conference for Civil Rights found 868 fewer places to cast a ballot in counties previously covered by Section 5 of Voting Rights Act, which was struck down by the Supreme Court in 2013. The total number was undoubtedly higher, since it only included 381 of the 800 counties, where polling place information was available in 2012 or 2014. “Out of the 381 counties in our study, 165 of them — 43 percent— have reduced voting locations,” the report stated.  But there were relatively few specific problems reported. Much harder to track is the more subtle effects due to increased difficulty of getting to the polls.

One exception was Nevada, where the Trump campaign brought a lawsuit challenging votes cast in several early voting locations that were open late because of long lines. The suit also sought the names of the poll workers at the sites.

“Do you watch Twitter? Do you watch any cable news show?” the judge in the case asked, incredulously. “There are trolls who can get this information and harass people.  Why would I … make information available to you about people who work at polls when it’s not already a public requirement to do so? So that those people can be harassed for doing their civic duty?”

Democrats have now won the popular vote in six of the last seven presidential elections. But two of those six victories—Clinton’s this year and Al Gore’s in 2000—were transformed into defeats in the Electoral College. [Gore received approximately 540,000 more votes than George W. Bush, but Bush became the 43rd president by winning the Electoral College tally, 271 to 266.]

The losses reflect the party’s far-ranging institutional weakness, which was underscored by the Democrats failure to regain control of the Senate, despite being slightly favored in pre-election polls.

At the same time, there were progressive advances on ballot initiatives. Eight of nine marijuana initiatives were approved, including in California, and all four minimum-wage measures also passed.

“Marijuana law reform is sweeping the country, no matter how hard our opponents have tried to roll back our gains,” marijuana reform group Marijuana Majority said in a late-night statement.

Three of four gun safety measures passed, including Proposition 63 in California, which bans large-capacity ammunition magazines and requires some people to undergo background checks in order to buy ammunition.

It’s too soon to definitively see why polls were wrong, but it wasn’t because they were “rigged,” as Trump often claimed.

What’s clear is that Clinton’s decision to court college-educated Republicans to offset non-college losses did not turn out well in the crucial state of Pennsylvania. Poll-predicted gains in Philadelphia suburbs did not materialize to offset losses in more rural and exurban areas.

But this makes it easier to understand the results. The continued sluggishness in the world’s recovery from the 2008 financial crisis has failed to restore pre-crisis levels of economic security for middle-class majorities, accentuating longer wage-stagnation trends. Meanwhile, elites have recovered, and seem increasingly disconnected from the larger population.

In the United States, a wide range of significant social indicators point to increasingly levels of political instability and potential crisis through 2020, according to a 2010 paper in Nature by cultural anthropologist Peter Turchin. Turchin just published a book-length expansion on the subject, Ages of Discord, which examines all of U.S. history in terms of a model that quantifies the main factors contributing to socio-political instability. These include popular immiseration (falling incomes, declining  and health indicators), elite overproduction (too many elites competing for too few resources) and state fiscal distress (a combination of excess debt and declining trust).  The model explains how non-linear feedback between different factors produces increased stability up to a turning point and then produces the opposite. This was most recently experienced in the United States around 1970.

“First, our political class really doesn’t understand the population they govern,” he said in an email. “The indicators that I watch all continue to show increasing popular immiseration, so why is everybody surprised when a political entrepreneur figures out how to channel it?…. Uneducated people I know (not a scientific sample, admittedly) are actually not stupid and they don’t really believe Trump. But at least he is saying what they want to be said out loud…. Clinton, on the other hand, is perceived as a candidate of the wealthy and, worse, of foreigners (I can’t believe she accepted that large donation from Qatar during her tenure as Secretary of State)…. We should expect growing intra-elite conflict, political instability, and government dysfunction…. Had Clinton won, it would be the same general trend, although particulars would, of course, change. I don’t think it will help Trump that Republicans are likely to keep control in the Congress. There is really no Republican party anymore; it has split up into three factions.”

While political commentators across the board were shocked and surprised, Turchin sees more of a continuity — though not in an encouraging direction.

“Unfortunately, we are still on the same disintegrative trajectory and this ‘shocking upset’ suggests that it may be entering the accelerating phase as nonlinear dynamical feedbacks are amplifying each other,” he said.

At worst, this sort of dynamic is what sometimes leads societies into civil wars.  But it doesn’t have to. In the 1910s and 20s, elites found ways to reverse the trends that were pulling their society apart. So, we know it can be done.