LONG BEACH — A police dog was killed by friendly fire June 26, after pursuing a suspect in connection to a 2014 shooting. 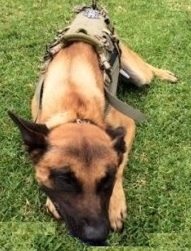 The suspect fled to the 2800 block of East 15th Street, where he hid in an apartment building. The suspect was considered armed and dangerous, causing Long Beach SWAT to respond with assistance. The man ignored the officers’ commands and aggressively charged towards them. Intermediate force was deployed, which included a 40mm rubber baton round as well as Credo, a 4-year-old police service dog, who tried to stop the suspect from advancing towards the officers. The man pulled a knife out while moving forward, and an officer discharged his weapon. Both the suspect and Credo where hit.

Credo was partnered with Officer Mike Parcells for the past two years. He worked primarily in patrol and narcotics.

The suspect’s name is being withheld pending notification of next of kin.

The Los Angeles County Coroner and the Los Angeles County District Attorney’s Office are conducting independent investigations into the shooting. Anyone with information regarding this incident is asked to call the Long Beach Police Department Homicide Detail at (562) 570-7244.

LONG BEACH — The Los Angeles County Coroner identified a man murdered on June 28 in the 1200 block of Loma Vista Drive in Long Beach.

No suspect information or motive is available. The motive for the shooting is unknown and the investigation remains ongoing.

Anyone with any information or video related to this incident is urged to call (562) 570-7244 or visit www.LACrimeStoppers.org.

LOS ANGELES – City Controller Ron Galperin found that Los Angeles is paying millions of dollars in unnecessary interest on its bond when he began an audit of Prop O — the 2004 measure that financed stormwater cleanup.

Galperin and his auditors noticed large balances in the accounts associated with Prop O. The controller found out the city regularly issued bonds for Prop O’s long-term construction projects long before the bills came due. In many cases, bonds were issued long before contracts were even awarded.

Even though the borrowed money was invested, those investments typically yielded rates of return 2  to 2.5 percent lower than the rates the city paid out to its bondholders.

“No savvy investor would borrow money and then leave it sitting dormant in a bank account. And yet, that’s exactly what the City has been doing,” Galperin said.
In the case of Prop O, auditors determined that the city spent $6.8 million on unnecessary interest payments over five years. Auditors estimated that city taxpayers may have paid as much as $47 million in excess interest on bond programs over an 11-year period.

City policy has been to require that a department have all cash on hand to pay for the full amount of a multi-year construction contract at the time the contract is signed. In the report, Galperin recommended that the city change its procedures so it issues bonds closer to when the money is needed.

“Changing our practices and becoming more efficient in how we finance construction projects will translate into savings for taxpayers,” Galperin said.

While Prop O projects are taking longer to complete than planned and some administrative processes are in need of improvement, the city agencies with key roles—the Bureau of Engineering, the Bureau of Sanitation and the City Administrative Office—have done a commendable job.

For example, using funds provided by the bond measure, the City outfitted stormwater catch basins throughout the city with screens to stop trash from flowing into waterways, rehabilitated Echo Park Lake, began to restore the ecosystem at Machado Lake, and created a wetlands park in South Los Angeles at a former bus and rail yard.

To see pictures and videos of projects funded by Prop O visit  www.lacontroller.org/geopanel_la