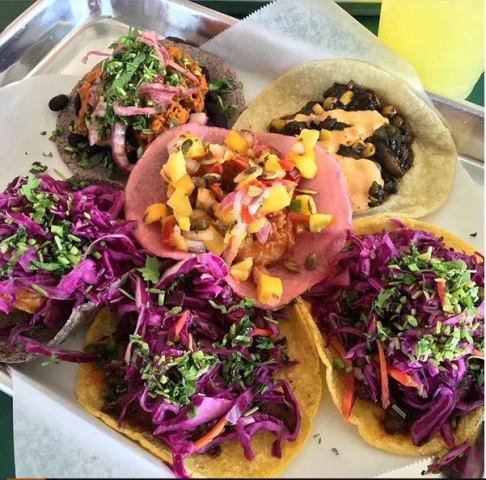 Taco shops are ubiquitous in the Harbor Area. Anyone could pick up a rock, throw it, and it would hit a Mexican restaurant, but Balam Mexican Kitchen in Lynwood is unlike anything around for miles.

In Mayan, “balam” means “jaguar” and at Balam Mexican Kitchen, Chef Manuel “Kornie” Bañuelos is the bearded beast of a chef responsible for cranking out tacos that are basically to die for.

Bañuelos moved to Lywood from Guadalajara in October, just three weeks before opening Balam in a former fast-food stand. Originally, he was set to open a fine dining restaurant in Laguna Beach, but as it is with so many restaurants that are set to open on schedule, plans change. For my own selfish reasons, I’m glad he rooted in Lynwood. Chefs flock to affluent areas on the regular, thinking they’re going to be the next best thing. It’s nice to see a young, well-rounded, creative type nesting in our neck of the woods.

The menu is simple—only 10 signature dishes, each served with custom garnishes and sauces. But any of them can be prepared and then plated as tacos, burritos, torta ahogada or quesadillas.

June 11 was Tacolandia, the 4th annual taco festival in Los Angeles. There were more than 140 vendors from Los Angeles, Orange County, San Diego and Baja California and about 9,000 attendees. Bañuelos took home the award for Best in Taco Innovation.

How innovative could tacos possibly be? They’re just meat and tortillas, right? Wrong. The Tropical T taco is coconut shrimp, mango pico de gallo, toasted pumpkin seeds on a “tortilla” made from a carefully sliced, hibiscus infused Jicama root.  It was out of this world: fresh, crisp and clever.

Of course, there are the options that veer towards the classic—like pork carnitas or braised pulled pork shoulder—but it’s fun to play around with familiar flavors in a way one would least expect. The chicken tinga masala, a traditional Indian dish, but served up on a tortilla, fuses two wonderful, albeit similar cuisines in spice and garnish. That was unexpected but wonderful.

Korean barbeque has been popularized by foodies and food truck followers for years, so the Korean asada with bulgogi beef is a perfect addition to an out-of-the-box taco menu.

Don’t worry vegetarians, Balam  also accommodates your kind also. The kuuxum (mushroom in Mayan) and rajas feature mushrooms and peppers, respectively. Both pack plenty of flavor and are  unique, as opposed to the old potato tacos I see everywhere else.

I ordered all 10 options (no surprise there) and I ate all of them (again no surprise at all)! There wasn’t one taco that I didn’t enjoy and at $2.74 a taco, the price is right too.

Want some more good news? Their beer and wine license was approved, so they’ll be pouring craft brews from our very own Phantom Carriage Brewery in Carson. Tacos and beer just in time for summer. Looks like I’ll be spending a lot of time in Lynwood.