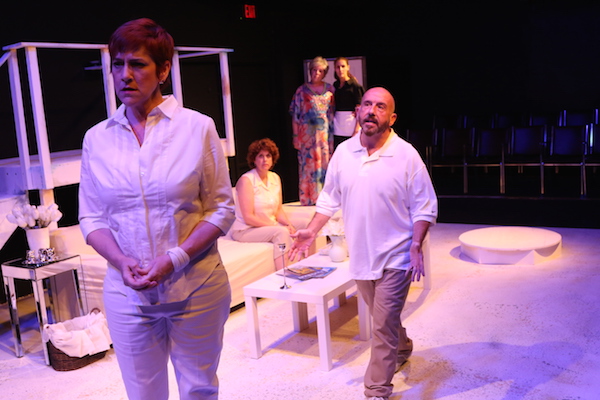 There are no rules in theatre. Sure, you can say there must be characters (although Samuel Beckett’s Breath, what?) or that there’s got to be some sort of stage/frame where the play takes place, but you’d be missing the point. In spirit, there may be conventions, but there are no rules.

So why does Sarah Ruhl’s The Clean House—a not especially unconventional play—feel like it’s breaking a rule it should have followed? That imaginary rule would be something about having an emotional center. The Clean House doesn’t have one, and as a result it elicits only traces of feelings, like a pulse so thready that we can’t trace it back to a beating heart.

Lane (Amanda Karr) hasn’t seen much of her husband Charles (Stephen Alan Carver) lately. They’re both doctors, but it seems he’s had a sudden surge of surgeries. What she doesn’t know is that he’s found his soulmate in Ana (Susie McCarthy), on whom he’s just performed a double mastectomy. The person’s Lane is seeing the most of these days is Matilde (Lucia Estevao Lopes), the couple’s housecleaner who gets depressed by cleaning houses. Matilde wants to be a comedian, while Lane’s sister Virginia (Deb Snyder) just wants a purpose. She just so happens to love cleaning, so she secretly takes over Matilde’s workload, leaving the latter free to attempt to craft the perfect joke.

Usually the term ensemble piece is reserved for big casts, but it fits here because not only doesn’t The Clean House center on any of these characters, it never zooms in for an emotional close-up on any of them. The only one who has any sort of character arc is Lane; the rest remain exactly the people we first meet (even if neat-freak Virginia does get angry and make a mess), people we never really get to know. Even as Lane comes to forgive and even love Ana, for example, we never really know why, because we don’t really know that much about either of them. One day on Ana’s balcony Lane just gushes about how Ana glows, as if a magic spell has been cast on her.

Magic may really have something to do with it. The Clean House seems to at least make a head fake in the direction of magical realism, an angle that Little Fish’s production seems to play up (for example, when apples thrown off Ana and Charles’s balcony are seen by Lane as she lay on her sofa). But like the emotional substance of the play, this feels vague and ungrounded.

There’s nothing wrong with the acting. Lopes is doing a Lucille Ball-meets-Yakov Smirnoff thing that seems about right for Matilde. The antagonism and eventual thawing between Lane and Virginia feels properly sororal. And although Charles and Ana aren’t speaking characters until after intermission, Carver and McCarthy immediately put as much flesh on their roles as Ruhl has written. But with so little happening at the subterranean level of the dramatis personae, a cast can go only so deep.

If the script has a strength, it’s Ruhl’s take on living or not living fully, whether in the face of death or in the midst of health. “Life is about context,” says Lane, who on the surface seems to have everything going for her but has probably never faced how ill equipped she is to embrace life. Meanwhile, Virginia is brave enough to admit to herself that her life has gone downhill since she was 22 and is flailing away to find a purpose. There’s a desperation about her, but desperation is living, right? Then there’s Ana, who is at the peak of living even as her body is fatally betraying her. “Everyone’s always dying lying down,” she says. “I want to die standing up.”

The Clean House was a Pulitzer finalist that the New York Times calls “[f]resh, funny [and] imbued with a melancholy but somehow comforting philosophy.” For me, there’s just not enough to these characters to feel their joy and pain. But hey, within the last month I’ve been less than thrilled with two Tony winners for Best Play, so what do I know?