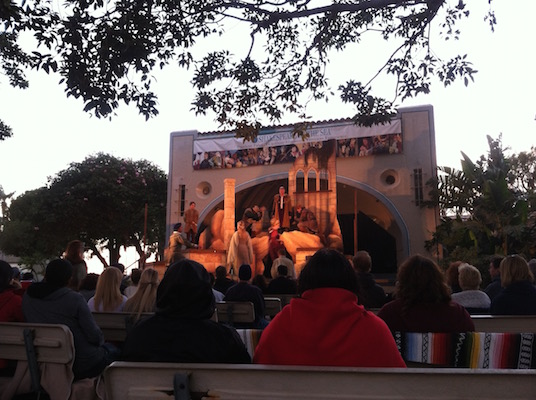 Back when I was heavily into Shakespeare, I considered Othello one of the Bard’s best. It’s a classic tale of deceit and jealousy that may be (along with Hamlet) the most compelling examination of the human psyche until Dostoyevsky’s Notes from Underground a quarter of a millennium later. On the other hand, Cymbeline seemed like a Shakespearean afterthought, odd and obscure and completely forgettable.

So when I heard that this year Shakespeare by the Sea is alternating productions of these two plays over the course of the summer and that I would be reviewing only one, it was a no-brainer which I wanted to do. But wouldn’t you know it? With the scheduling such as it is, I got stuck with Cymbeline. Lucky me.

No, really: lucky me. Thanks to Shakespeare by the Sea’s ability to magnify the comedic side of Cymbeline (one of Shakespeare’s four “romances,” so-called “problem plays” that critics have traditionally had a tougher time categorizing than his other 33), I was reminded once again that first impressions are often wrong. Well, sort of. Let’s just thank our lucky stars for George Bernard Shaw. But we’ll get to that.

Widowed King Cymbeline (Steve Humphreys) has a daughter, Imogen (Stacy Snyder), who married her childhood playmate Posthumous (Christopher Dietrick). This vexes the Queen (Andria Kozica), “a mother hourly coining plots,” because she wants Imogen for her son Cloten (Bryson “B.J.” Allman) so that eventually he will be king of Britain. That’s enough for Cymbeline to banish Posthumous, who goes to Rome to reside with a friend of his father. Once in Rome, his high praise of Imogen rankles Iachimo (Dorian Tayler), who bets Posthumous that he will be able to seduce Imogen and then immediately leaves for Britain, where his conniving to win the wager sets in motion a series of misadventures for all concerned.

Let’s not kid ourselves: frequently Shakespeare’s plots are ridiculous, and his writing can be as bloated as it is dazzling. In response to the popular (mis)conception that Shakespeare’s works came out fully formed, without his having to blot out a single line, Ben Johnson famously wrote, “Would he had blotted out a thousand.” It’s not that Johnson didn’t recognize Shakespeare’s genius, but he also recognized his fallibility.

So did Shaw. Although he ranked Cymbeline as among the best of Shakespeare’s later plays, “[it] goes to pieces in the last act,” he said, becoming “a tedious string of unsurprising dénouements sugared with insincere sentimentality after a ludicrous stage battle.” So Shaw did what many purists consider anathema: he fixed it, sifting Shakespeare’s bad last act to write a better one.

I had no knowledge of this as I watched Shakespeare by the Sea’s Cymbeline wind its way toward conclusion. All I knew was it was a hell of a lot funnier and cleverer than I’d remembered, and that the last scene made the meat of the play pay off spectacularly. Shakespeare had never seemed quite this funny.

Due credit goes not only to Shaw but also to director Cylan Brown, who had the good sense not only to use Shaw’s ending, but to make severe cuts throughout. (The entire performance runs under two hours including the intermission, which is nearly unheard of for Shakespeare.) For the duration Brown focuses the text and his cast on the humor in Cymbeline. It’s a bit slow going early on, but hang in there. Brown’s cast comes alive as the comedy kicks in. Especially strong is Bryson “B.J.” Allman as Cloten. His preening ignorance is most of what brings the funny before Shaw gets to work.

Shakespeare by the Sea does a nice job utilizing the wilds of Point Fermin Park. When Posthumous arrives in Rome, he comes calling from way behind the audience. With all that sky and ocean in the background, just about the only way to achieve greater verisimilitude would be to have him sail up on the beach and hop ashore. As for the challenges that come with staging theatre in a park, Shakespeare by the Sea has rigged up a sound system that makes it generally easy to hear the actors from far away and yet doesn’t blow you out if you’re sitting closer.

If you’re going to see Cymbeline, Shakespeare by the Sea’s production is the one to see. And if their Othello (a play that doesn’t need Shaw’s help) is as good, see that one, too.