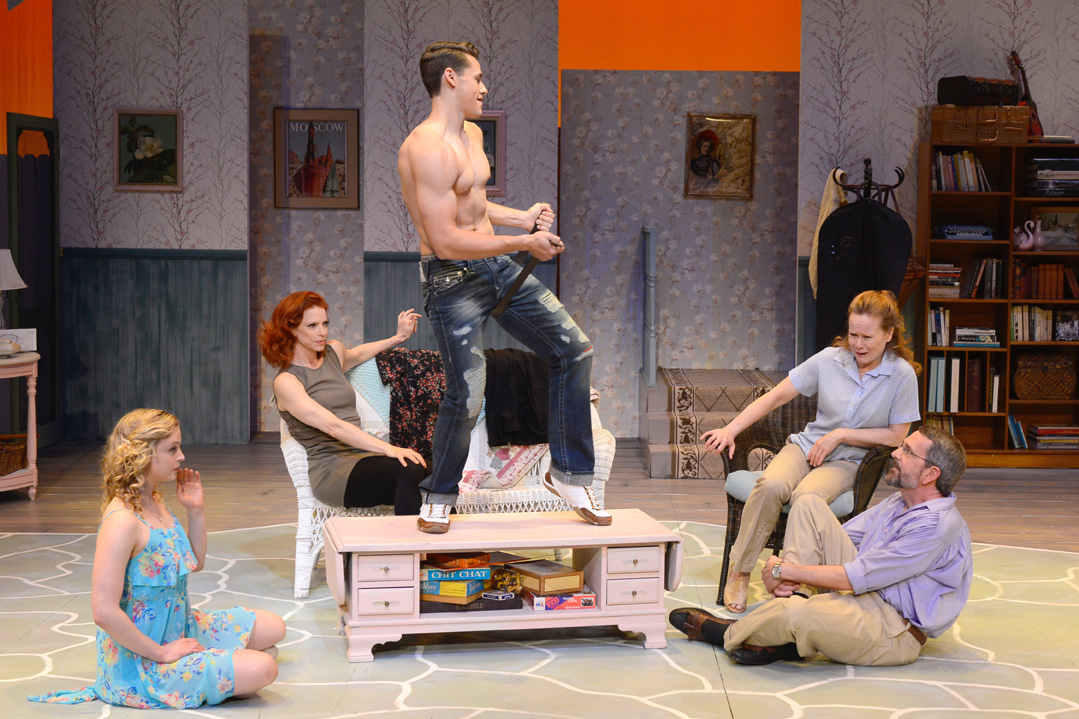 I must be a very dour fellow. There I was, sitting in the lovely Beverly O’Neill Theatre as a solid cast acted out the 2013 Tony-winner for Best Play on one of International City Theatre’s typically fine sets, the audience around me awwwing with empathy and giggling with delight…and I felt nothing.

Fiftysomething siblings Vanya (Stephen Rockwell) and Sonia (Jennifer Parsons) still cohabit their childhood home and lament that their lives seem to have passed them by sans adventure. Enjoying morning coffee in the dayroom is pretty much the highlight of their day, that and looking out for the blue loon that makes a daily visit to the lake beyond their rear window. Were it not for the melodramatic prophesying of their housekeeper Cassandra (Murielle Zuker), their lives would be colorless. But today will be different: Masha (Leslie Stevens), their younger sister and a jet-setting movie star, is coming for a visit, her twentysomething boy-toy Spike (Connor McRaith) in tow.

If you like your comedy with a dash of subtlety, Christopher Durang ain’t your guy, and giving a character named Cassandra psychic powers is the least of it. It’s not enough for Durang to incorporate elements straight from multiple Chekhov plays, he’s got to have his eponymous sibs given their Chekhovian names by theatre-loving parents (Sonia was adopted at 8, actually, by which point kids already have names, but let that go), and they’ve got to talk explicitly about Chekhov and do bits from Chekhov and live on a lot with a cherry orchard. It almost shocking that we aren’t shown a gun in Act 1 that will finally be used in Act 2.

It may be fitting, then, that there’s nothing subtle in any of the performances. When Cassandra prophesizes, Zuker seems straight out of an episode of I Love Lucy. Stevens plays Masha as a by-the-book comedy prima donna. McRaith’s Spike is reminiscent of Joey from Friends. Although Vanya and Sonia are quieter characters, their reserve shouldn’t be confused with subtlety. Everything about Vanya and Sonia and Masha and Spike is obvious.

But Durang has proven expert at getting laughs. He was a big deal way back in the 1980s, and he’s a big deal today. I may not have any idea why the woman in the front row cackled when one of the characters said, “Lions and tigers and bears—oh my,” but she did. And I give Durang this much credit: he aimed to throw in all this Chekhov stuff and yet create a play that could be enjoyed by those completely ignorant of Russia’s national playwright, and he hit his mark.

I’ve got to take back something I said. There is one subtle element to Vanya and Sonia and Masha and Spike, one that does in fact take a bit of knowledge of Chekhov to appreciate. Chekhov’s onstage characters are prototypes of quiet despair. Vanya and Sonia immediately show themselves to be cut from that cloth, as does Masha ultimately. Durang’s inspiration is to deliver these characters from despair—a move directly counter to Chekhov’s aesthetic. It may not be as clever a conceit as what Tom Stoppard does with Shakespeare in Rosencrantz And Guildenstern Are Dead, but it does provide Vanya and Sonia and Masha and Spike with an unexpected dimension (even if the liteness of the play means their desperation lacks gravity).

That’s not going to be enough to redeem it for you if you don’t like the comedy. You know how some you simply adore Christopher Guest films, while the rest of us just shrug? It’s not that we don’t get what Guest is doing or even appreciate it to some degree; we just don’t find Guest funny. Some of us don’t find Christopher Durang funny, either. But we may be in the minority.