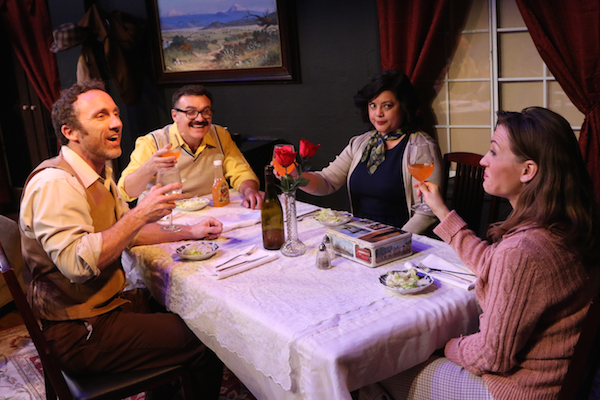 Although Annie is terribly fond of Tom, he seems to lack the courtship gene. As she confesses to sister-in-law Sarah during Table Manners‘s opening scene, her romantic frustrations with her would-be suitor led her to yield one night not so long ago to the dubious charms Norman, her sister Ruth’s husband. And now here she is, geared up for a weekend away with him. But Sarah, whose prudishness means she can’t have the television on at all these days, won’t have it, and so Sarah’s weekend will be spent here at the country house with her brother, Sarah, Norman…and, as it happens, Tom and Ruth. Not exactly the risqué getaway she had in mind.

If the set-up makes it sound like this is Sarah’s play, it isn’t: it’s Norman’s. What to call Norman? A self-pitying, whiny wannabe Casanova (Don Schlossman plays him just about right), Norman’s neither a proper protagonist nor an anti-hero, but he is the titular character of Alan Ayckbourn’s trilogy The Norman Conquests, of which Table Manners is Part I. The three plays tell the tale of the weekend by collectively documenting what happens in three different rooms, with Table Manners confined to the drawing room.

What you need to know mainly, though, is that Table Manners is drawing-room farce, so if you don’t like that kind of thing, pass this one by. It’s all repartee and slapstick—no depth, no character development, no subtlety.

If you like that sort of thing, well, fair warning: The Importance of Being Earnest this ain’t. But the Little Fish folk know how to bring the energy. Table Manners‘s most enjoyable moments are when all six actors are onstage together, playing off and talking over each other in scenes that feel, if not authentically fly-on-the-wall, at least like you’re peering into a black box with a perpetual-motion machine of farce churning away at its center.

Because Ayckbourn’s script is basically one note and has only one speed, there’s not a lot to say about the acting. Either the cast has the energy or they don’t—and this cast surely does. The rhythms are all there, and (to reiterate my favorite element) they show great skill at keeping the dialog intelligible even when multiple people are speaking at once. The only real flaw here is Scottish brogue that sounds a bit Bulgarian. But it couldn’t matter less.

Directors David Graham and Stephanie A. Coltrin obviously have the cast on the same page, and the proceedings come off seamlessly. One of the treats of attending the Little Fish Theatre is seeing how they’re going to utilize a performance space that is an unusual combination of lengthy and intimate. You’ll spend a decent amount of energy turning your head to follow all of the action, but that’s half the fun.

The other half depends on you. Are you hungry for something lite?