Artful Living at a Slumlord Price 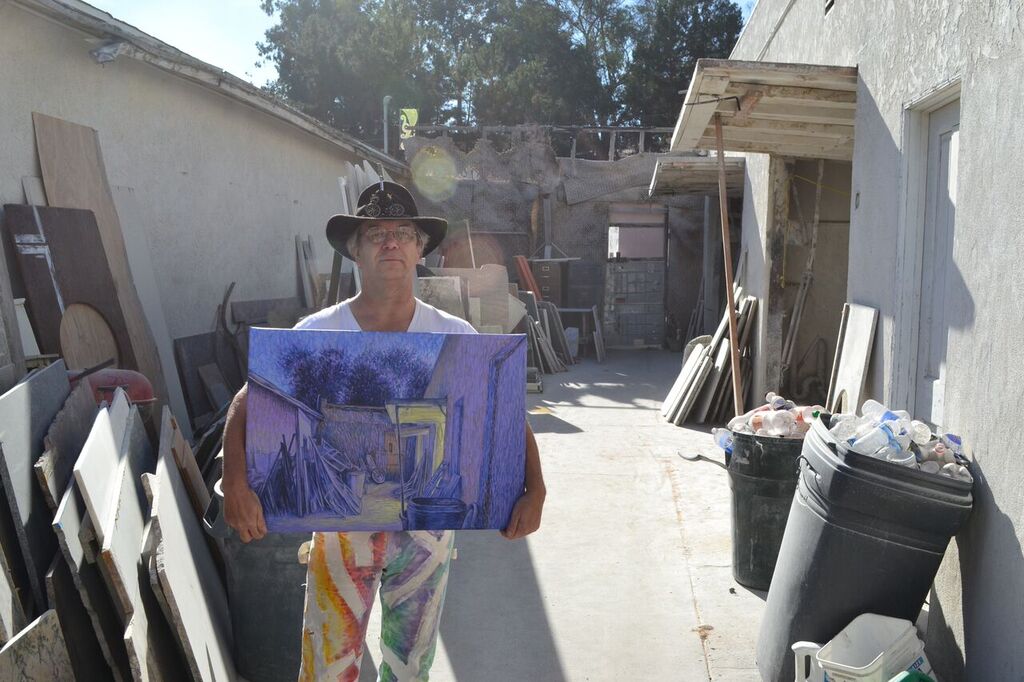 Before affordable housing was a visible public policy concern, before the housing market crashed in 2007 and before the creation of the San Pedro Arts District, local artists and property owners were discussing how to support and sustain the budding arts scene that was emerging in the community.

Several condominium developments marketed as artist lofts were built, but a coherent policy for sustaining the arts community with cheap live-work space was never created.

A couple of months ago, local artist Monte Thrasher told Random Lengths News about the living conditions in the arts colony known as The Pound, a place marketed to artists as live-work spaces at dirt cheap rents.

“The Pound is an artist only community in San Pedro. We have a room and studio space available for $350. We have two kitchens and two baths which are shared by all. Washer, dryer and utilities included. San Pedro has a exciting artist community and a monthly art walk downtown. A farmers market every Friday and we have a park and nature walk right out our front door. We have 12 artists working in a wide variety of disciplines. Painters, filmmakers, writers and crafters all enjoying a creative lifestyle together. First and last to move in and SEND PICS OF YOUR WORK with your reply. Sorry musicians really not set up for soundproofing. Available now.”

But soundproofing seems to be the least of the building’s issues.

Thrasher accuses the building’s management of abusing tenants’ rights through practices such as illegal evictions, fire and zoning code violations.

“The landlord has apparently abandoned the place,” Thrasher said. “There is no maintenance at all and the place is just falling apart.”

The property is zoned for industrial use only. In fact, a 1956 certificate of occupancy provided to Random Lengths News shows the building was once approved for the storage of flammable liquids and hazardous materials.

“Which hazardous waste?” asked Thrasher, rhetorically. “I don’t know. But we certainly weren’t warned about that.”

While there have been some complaints about the property in the past, the complaints have been closed or are under investigation.

California requires that real estate transactions of any kind be in writing. However, The Pound’s manager, Joel Stearns, admitted, tenant agreements at the complex are handled with an exchange of money and a handshake..

“The studios are rented…as art studios,” Stearns said, declining to admit that people live in those studios.

Artists are generally drawn to raw spaces—spaces in which amenities aren’t absolutely perfect and can be modified or converted to fit their needs.

Thrasher admittedly has had tenant-landlord issues at other places he’s resided, where he was able extend his tenancy without paying rent, as he now is doing.

“He has no job,” Stearns, 68, said. “He can’t hold a job. He’s medicated. He’s clinically depressed…from what he’s told me and other people….He’s been trouble from about six months after he moved here.”

There are a lot of rules and regulations governing art colonies, noted Walter Beaumont, former Community Redevelopment Agency representative for the San Pedro Arts, Culture and Entertainment District. He cited the new development that just opened on Pacific Avenue and 4th Street in San Pedro, and two others in Long Beach and Burbank.

Robin and Doug Hinchliffe were among the early core anchors of the San Pedro arts district, developing spaces for the purpose of curating cutting-edge art shows while providing live-work spaces for artists.

Artists working in large media formats, such as painters and sculptors, need at least 1,500 square feet to work and store projects. For years, the Hinchliffes provided a kind of rent control for good tenants, keeping their rental rates competitive, if not cheaper than elsewhere in Los Angeles County for similarly sized spaces.

TransVagrant at Warschaw Gallery curator Ron Linden identifies Marylyn and Chuck Klaus, who donated the building housing the Marylyn and Chuck Klaus Center for the Arts, and Linda Jackson, who owns wine lounge, Jackson’s Place, as enlightened property owners. Jackson also owns several of the adjoining spaces next to the lounge.

Another important point about the Hinchliffe’s properties is that they are up to code and legal. It’s not clear the same can be said of The Pound.

Stearns said that though The Pound is owned by Emmett Clark, the person leasing the property as an artist community is a Florida man, Mike Turner, with whom Stearn said he only communicates through social media.

It is unclear if there is plan to salvage the situation at The Pound.

Thrasher said that he believes he still has a shot at making The Pound an artists’ haven by applying to the courts and placing a lien on the property. He believes that suing the landlord would give him a vested interest in his financial state.

“We don’t want him to sell off all of his stuff before we can get it,” Thrasher said. “If we place a lien on it, our hope is to compel the guy, get maybe a court settlement or an agreement with the court that will allow this place to survive, allow us to bring it up to code and turn it into a real, long-term artist establishment.”

But the reality may be quite different, Stearns said.

“The landlord, if he has to deal with this, he’ll just kick everybody out and rent it to businesses,” Stearns said. “The artist community has done this over and over and over again. They move into areas that no one else wants to live. They build the area up and all of a sudden it becomes more popular, other business want to move in. I mean, look at downtown San Pedro. The artists move in and then the city goes and says, ‘OK, it’s legal to live there’ or ‘it’s not.’ And, if the city comes in, they don’t ask people to bring it up to code, they just kick you out. I’ve seen it happen.”