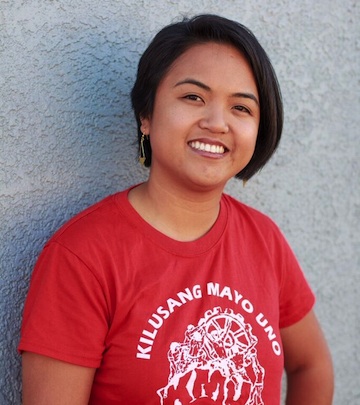 Nikole Cababa comes from a strong line of fierce women, but she had to overcome identity and cultural challenges before she found her own voice as a grassroots organizer.

Cababa is the child of Filipino immigrants who came to this country seeking economic opportunities and a better life for their families back in the ‘80s. But her father left when she was 9, and Cababa was thereafter reared by her single mother with the help of her grandmother. Cababa remembers her mother working three jobs to support two children on her own. She remembers the many times she cried when her mother, a licensed vocational nurse, had to leave home in the middle of the night to cover a shift.

“My grandmother and my mom taught me what hard work really meant, what it meant to sacrifice for your family, what it meant to put others before yourself,” said Cababa, now 28. “My family is my inspiration because I had to see a lot of their hardships.”

Like other groups of immigrants, Filipinos often come to United States to find work; there are not enough jobs available in the Philippines to sustain the nation’s entire population. Much of this is the lingering impact of dictator President Ferdinand Marcos (1965 to 1986), who created a Labor Export Policy that prioritized Filipino exports without solving the issue of unemployment.

“It’s really like putting a Band-Aid on a gushing wound,” Cababa said. “You are not really solving the root issues, you are actually just worsening [the problem].”

To this day, the Filipino government has yet to create any meaningful, long-term solutions to unemployment and migration. The new norm is having a family member abroad.

“Here in Southern California we have the largest concentration of Filipinos living outside of the Philippines,” Cababa said. “So it really makes sense that we needed to create a center to really support Filipino migrants, because it’s a hard transition once you get here and you feel really isolated when you arrive.”

These days the Long Beach resident works for the Filipino Migrant Center, which serves low-income, working-class Filipinos throughout Southern California. She helps organize people who have recently migrated or are facing challenges at work, at home or in their neighborhoods to develop their leadership skills.

Addressing youth and student mentoring, educational workshops on immigration, labor trafficking, raising the minimum wage and highlighting the issue of wage theft are among some of the campaigns the center takes on in Long Beach. The center does so through door-to-door outreach, tabling, flyers and talking to people about the issue.

“You would be surprised,” she said. “A lot of people have, at some point in their lives, experienced a form of wage theft like missing their meal breaks or not getting paid on time. It’s a huge issue but I think it’s often overlooked.”

She also volunteers with an organization called GABRIELA Los Angeles, a Filipina organization which strives to build a strong women’s mass movement. She is working on human rights issues in the Philippines and in Los Angeles. Among those issues are campaigns fighting violence against women, labor trafficking and Justice for Jennifer Laude, a Filipina transgender woman who was murdered on Oct. 11, 2014.

Through her work with those groups Cababa had the opportunity to do coalition building with LGBT communities, communities of faith and other grassroots organizations by lobbying, providing educational workshops and protesting.

“It probably is easy to feel immobilized by a lot of the large issues that are happening, but because I was craving more collective spaces, more community spaces, that’s where I felt like I can be more powerful: with groups, coalitions, working on issues that we all care about.”

There is still a lot of work that needs to be done in the Filipino community but coalitions among groups have helped Filipinos grow stronger through the commonalities.

Cababa was one the first in her family to attend a public university and there was a lot of pressure. When she became an activist at UCLA, working on immigrant rights and affordable education, she started feeling empowered.

Her college activism “was somewhat accidental.” She said she wasn’t looking for activism. She wanted to get involved on campus and she got involved in a service-based organization, Samahang Pilipino Advancing Community Empowerment. The group provided academic services and mentorship to high school students in the downtown Los Angeles area.

“I came in thinking it was just about providing services, but I also was exposed a lot more to the issues that those high school students were facing,” she said, referring to problems like gang violence, lack of school resources, lack of opportunities for undocumented students and poverty.

She realized that the goal was not just to an academic education.

“You actually learn a lot more valuable lessons being in the community than you can ever pay for going to a university,” Cababa said. “Both formal education and community education go hand in hand. Once I started to realize how valuable it is to be in the community, I knew activism was for me.”

That’s when she started getting more politicized and getting more involved on campus. Immigrant rights and affordable education were among some of the issues that spoke to her.

“Those were the seeds of my activism,” she said. “So, by the time I came back to Long Beach, I knew I really wanted to be a part of something that I was never a part of growing up.”

She volunteered with Los Angeles Alliance for a New Economy and other grassroots organizations. She came to LAANE through her work with Anakbayan, a grassroots youth and student organization that worked with the alliance on several issues.

“I was seeking a space for…social justice and activism,” Cababa said. “I got a taste for it in college, but I really wanted to bring what I learned in college back to Long Beach. And, I still wanted to learn a lot more from what was happening here since I’d been gone.”

At LAANE she helped advance the living-wage campaign for more than four years, working to improve the lives of hotel workers.

The stories of the people like hotel workers, port truck drivers and caregivers, who live in single-parent households or take multiple jobs to provide for their families deeply resonate with Cababa.

Words for the future

For Cababa, activism and organizing is a life-saving and life-changing experience, whether as volunteer or a full-time worker.

“It’s actually a great privilege to do this kind of work,” she said. “Change is possible and it’s necessary.”

By law, the insurance company may not charge you any co-pay, deductible, or any out-of-pocket expense for the test.
Read more
Load more