Dump the Trump Campaign Gears Up 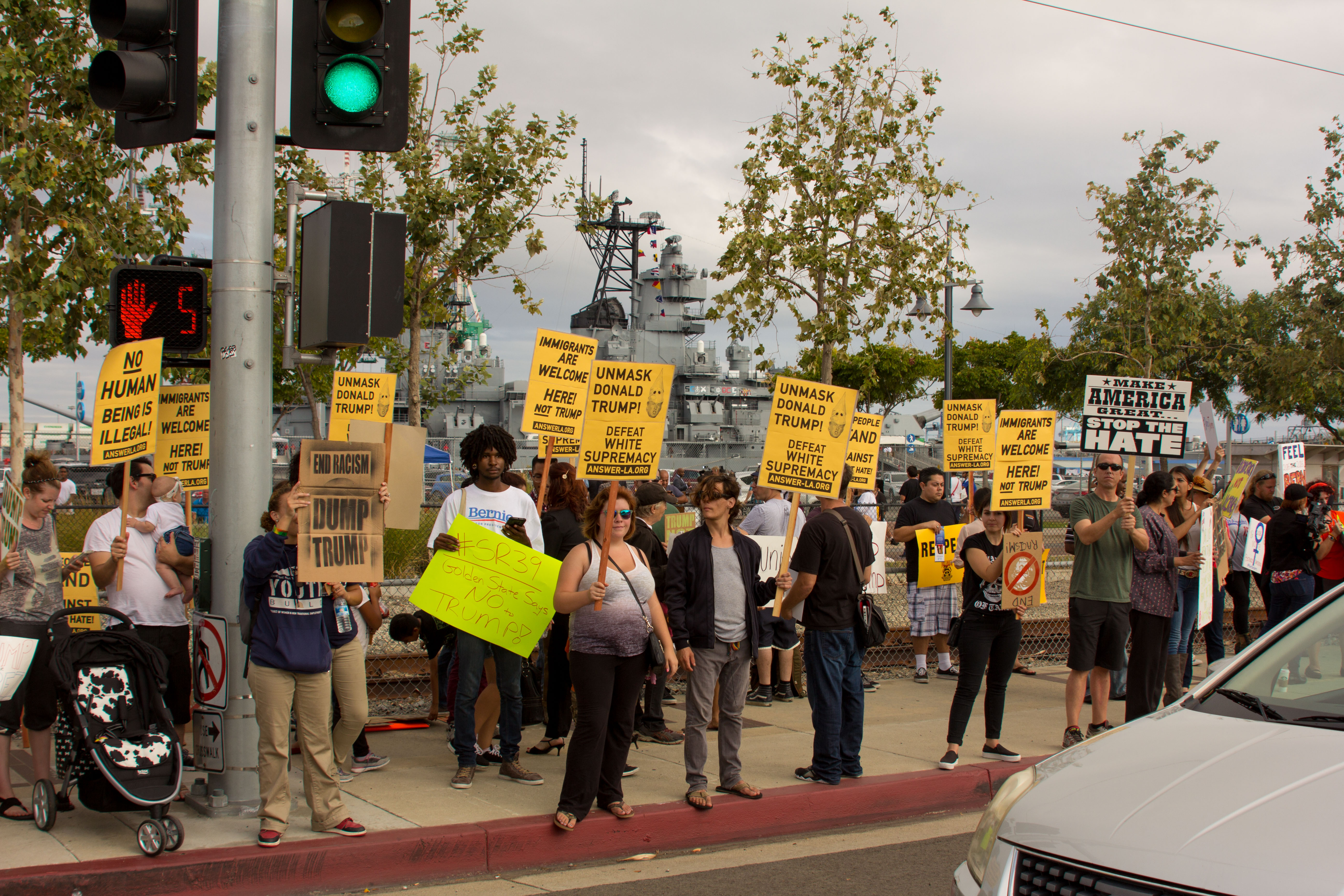 More than 300 demonstrators picketed presidential candidate Donald Trump’s visit to the USS Iowa from just beyond the parking gates of the Pacific Battleship Center on Sept. 15. They came to the waterfront from throughout Southern California, including Carson, Costa Mesa, Wilmington and San Pedro. The Dump Trump forces provided the perfect backdrop for State Sen. Isadore Hall to promote his Senate Resolution 39, which calls for the state to divest from all Trump-related businesses in response to celebrity candidate’s purposeful race-baiting. [portfolio_slideshow id=11065]

Long Beach resident Jeremie Gates was disturbed by the traction the Trump campaign has seemed to pick up. “I went to school around here and I like the diversity,” said Gates, a recent graduate of Palos Verdes High School. “From what I can tell from Donald Trump’s platform, he’s generating a lot of enthusiasm, but he’s going in the wrong direction and trying to repress society. I see that as being potentially detrimental to the United States.”

Other demonstrators expressed similar sentiments. “Even though I live out in Orange County, Trump does not belong in Southern California with his hate speech,” Mark Richardson, 34, said. Andy Chamers, 64, of San Pedro, came to rally with his 17-year-old son, Andrew.

“I just wanted to make my voice heard and offer my support of immigrants and working people in general,” Chamers said. “I just think he’ll be a terrible president. I just hate to think what he would do to the country. Just about everything he says are code words for racist, anti-working class ideology. I’m actually really perturbed that so many people have fallen for it. Some people really like him but some people have been duped by him. The man’s a charlatan. He’s declared bankruptcy. He’s not even competent in his chosen field.”

The younger Chamers expressed similar sentiments. “I just don’t want a racist in the White House,” he said. “Someone like that doesn’t belong in an office that governs a country full of immigrants. He said, ‘Immigrants don’t belong here.’ That doesn’t make any sense. That’s like saying strawberries don’t belong in strawberry pudding. Yes, they do. It’s strawberry goddamn pudding.”

Ray Cordova, chairman of South County Labor AFL-CIO and a Vietnam veteran, served as the emcee for Hall’s press conference but he was the speaker that got the most enthusiastic applause as he recalled Trump’s service record, or lack thereof.

Cordova described how he and his five younger brothers received draft notices during the Vietnam War. His mother had to walk each son to the train station to see them off to war. Cordova said his research of Trump’s record with the Selective Service shows Trump received 8 draft notices between 1964 and 1972—four more than he has publicly acknowledged. “On July 28 of 1964, he went to the draft board and was classified as a 2S—that’s a student deferment,” Cordova explained.

“He went back again on Dec. 14, 1965, and he got deferred again. On Nov. 12 ,1966, he was classified as 1A and was eligible for the draft. Less than three weeks later he was back on student deferment. Then in Jan. of 1968, he was brought back on student deferment again. On July 9 of 1968, he was classified as 1A eligible for the draft at the end. He immediately went back to the draft board and was reclassified as 1Y, which meant you could only be drafted in the event of a national emergency.

On Feb. 19, 1972, he was classified as 4F. That means you’re not physically, mentally or morally capable of military service. Which of those three was it, Donald Trump…mental, physical or moral? “How dare he stand on that battleship. Now he wants to be commander and chief? San Pedro has three words for him: ‘Forget about it!’” The rally organizer, San Pedro Democratic Club president Robert Brandin, spoke as a veteran and supporter of SR 39. “Divest from Trump,” Brandin said.

“The USS Iowa isn’t just a ship. It represents freedom, inclusion, liberty and justice. To have someone like Donald Trump stand on it and spew nonsense about what he thinks it is to be an American is unacceptable.

“What about the 65,000 immigrants who have served in the U.S. military?” Brandin asked.

“They courageously risked their lives for the country they call home.” SR 39 condemns discrim- ination in any form on the basis of race, ethnicity, national origin, gender, sexual orientation, gender identity, or disability, and calls for an end to hate speech and racist rhetoric by all presidential candidates. The resolution condemns Trump in particular, calling for all of California, including business and individuals, to divest from him, the Trump Organization and any affiliated entities. Hall, who is running for Congress in the 44th district, said the content of Trump’s rhetoric regarding Mexican immigrants deserves such a response.

Trump’s 15 Minutes on the Iowa

Trump took to the stage on the USS Iowa at 6 p.m., just minutes after Hall’s press conference concluded. Although he had promised to lay out his national security platform, Trump instead delivered a 15-minute, bullet-point speech that seemed lifted from one of his episodes of reality TV, which typically applied the same sketch to different sets from Mobile, Ala. to Southern California:

• “Illegal aliens” are bad…I’ll kick ‘em out and build a wall. America’s leadership is weak…I’ll grow military and show the world how great a leader I am.

• “Current leaders can’t negotiate…Read my book, The Art of the Deal.”

•“Veterans Administration is slow…I’ll tear it down and build it from scratch.”

The following are some of the highlights or low points, depending on your ideological persuasion:

“The veterans hospitals obviously have problems, they are not properly run and when you have to wait long hours and long days and then in some cases the doctor says, ‘I’m sorry but I’m going on vacation,’ believe me it does not get much worse than that,” Trump said.

“So, we’re going to create a whole new system; we’re going to take the system apart and if they’re not doing the job, the veterans are going to go to private doctors and private hospitals and we’re going to reimburse those doctors and those hospitals. You’re going to get the greatest service of any veterans in any country because you deserve it. That’s going to be broken down into something very special. Right now, we have illegal immigrants who are treated better, by far, than our veterans. It’s not going to happen anymore.”

Were he to become president, his administration would come out with plans in a very short time, Trump said. “We’re going to build up our military,” he said.

Trump went on to say that the silent majority, as he called his party, is back. “And, I think we can use it somewhat differently,” he said. “I don’t think we have to call it a silent majority anymore because they are not silent. They’re disgusted with our incompetent politicians, disgusted with the people giving our country away; they’re disgusted with the people who tell our border patrol agents, who are good people doing their jobs, to allow people to walk over the border right in front of them and they’re standing there, helpless, and people just pour into the country. They’re disgusted when a woman that is nine months pregnant walks across the border has the baby and you have to take care of it for the next 85 years.”

Note: In Dallas, he suggested that instead of calling it the Silent Majority, “maybe we should call it the noisy, the aggressive, the wanting to win majority…We’re going to be getting so many victories that it’s going to be coming out of your ears.”