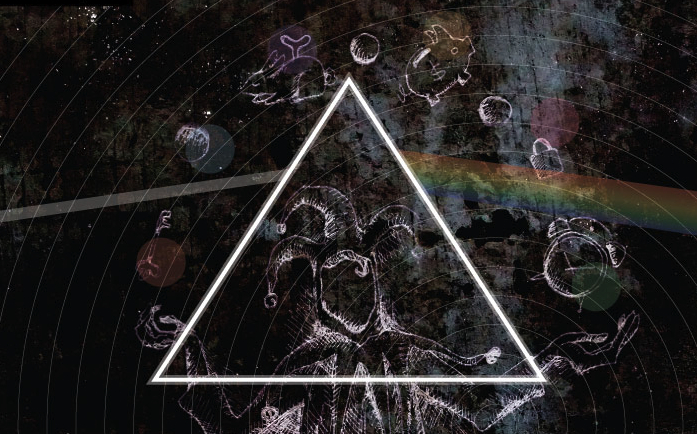 Tom Stoppard has won more Tony Awards (four) than any playwright in history, and he got jobbed out of a fifth in 1995 when his Arcadia, the best play ever written, lost out to Terrence McNally’s comparatively mediocre Love! Valour! Compassion!

No doubt a certain subjectivity plagues the previous paragraph, but there’s no spin in saying that Stoppard, who has also managed to pick up an Academy Award for co-writing Shakespeare in Love, is as big a deal as there is in the literary wing of the theatre world.

So no-one would have guessed that the black box that is the Garage Theatre will host the world premiere staging of Darkside, Stoppard’s 2013 radio play incorporating music from Pink Floyd’s The Dark Side of the Moon.

That goes double for Eric Hamme, who obtained the rights and will direct the show. “‘Why the hell did you give these guys the play?'” he proposes as my first question for Stoppard. “That would be something I’d like to know.”

Considering that Stoppard lives 100 miles from London and says he is in even NYC “only when absolutely necessary,” the man himself certainly had not heard of Hamme’s little Long Beach theatre, which has to get creative to cram in an audience of 50. Presumably, then, it’s got to be partly because no-one thought to ask. Darkside is a radio play, after all, which means it wasn’t conceived to unfold in physical space.

Nonetheless, this isn’t uncharted territory for the Garage. The second-ever show the company staged was Artist Descending a Staircase—as it happens, also a radio play by Stoppard, the only other such show they’ve mounted in their 15-year existence. “Apparently we only do Tom Stoppard radio plays,” Hamme jokes.

But the challenges of attempting such work—both radio plays and works by Stoppard—are formidable. While Darkside is intellectually straightforward for Stoppard, with its evocation of utilitarianism, Kantian and Nietzschean ethics, and thought experiments such as the Prisoner’s Dilemma, let your attention wander and you might find yourself lost before you know it. And that’s without even considering the metafictional question of what is really going on as philosophy student Emily McCoy wanders through a mysterious, mountainous milieu looking to answer that age-old question “What is the Good?” while The Dark Side of the Moon washes across the action, more a character in its own right than simply a score.

“You could present it like a musical, in sense: when the songs play, treat them like you would in a musical and have people dancing and moving, [etc.],” Hamme says. “But I don’t want to do that. I don’t want to pull away from the songs. I want the music to be sort of the center of those scenes. But then what do you do, just turn on the lights and have, like, a listening party? That also isn’t very interesting. […] Stoppard in general is challenging. Fascinating and fun, but challenging. He works on so many different levels, and everything means something. It’s like every word he writes has this wealth of knowledge behind it. So diving into that and familiarizing myself with stuff that I don’t have any experience with, [such as] Nietzschean philosophy, that’s a challenge, because you could spend a lifetime studying that stuff, and I got two months.”

Stoppard himself regards the Garage’s attempt as an uphill climb. “I guess every scene is difficult when not impossible,” he says, offering as an example a moment when the play, which has unfolded in Emily’s mind, “change[s] to ‘real world’ (sort of real).”

Hamme learned of Darkside in spring 2014 while browsing the aisles at Fingerprints Music in downtown Long Beach. A lifelong Pink Floyd fan who regards Stoppard as “obviously one of the most fascinating and intelligent playwrights out there,” Hamme brought the play home and read/listened to it (it comes with a CD of the BBC’s production, which originally aired in August 2013). Instantly enamored of the work, Hamme began to imagine the possibilities of staging it.

“I was like, ‘God, this would be great for our theater,'” he recalls. “It fits our aesthetic. But then there was that other part of me was like, ‘There’s no way they’re going to give us permission to do it.’ But I knew I wanted to try, at least. It never hurts to ask.”

Thus began a series of e-mails to Stoppard’s literary agency. Although they were responsive, Hamme wasn’t holding his breath and set about applying for the rights to other shows that could possibly fill the space in the Garage’s season where he wanted to insert Darkside.

“And then I got an e-mail one day from his agent,” Hamme chuckles, “that just said: ‘Tom is interested. What are your ideas?’ And I was like, ‘Holy shit.'”

By this point Hamme had not looked at the script in six months, “and now I had to write Tom Stoppard and tell him my ideas about his show. So I re-read it twice, listened again to the radio broadcast, and started jotting down, and then I kept myself up ’til 5 in the morning writing this e-mail in my head over and over again. Then I got up the next day and wrote it. Of course it never came out the way I wanted it to. It was, like, this long description of how I wanted to present the show, and how I saw Pink Floyd in ’94 and my experience with that and that I wanted to take elements of that experience and put it into this, and blah blah blah blah blah. [Laughs] And then they got back to me right away and said, ‘That’s great, but we’re thinking, like, what dates are you looking at.'”

Hamme became optimistic as e-mail exchanges over the next few weeks seemed to indicate that approval was pending, although he remembers feeling crestfallen when asked about the size of the Garage Theatre and ensuing discussion of whether the Garage is technically considered a “professional” or “amateur” theatre company. But then came the magic word: yes.

There was a catch, however: Hamme had to obtain from Pink Floyd permission to use the music.

Unlike with Stoppard’s team, Pink Floyd’s people were completely non-responsive to Hamme’s inquiry. After a half-dozen fruitless follow-ups, Hamme went back to Stoppard’s agent, hoping the latter might intercede. And that’s exactly what happened: “He wrote back and said: I talked to them, and it’s all good.”

Hamme was still proverbially pinching himself when we sat down a month ago, but there was an unresolved downside to doing Darkside. Aside from the fact that the rights to perform the play cost about double the industry average, considering that the Garage needed to find an additional $1,500 worth of tech to bring Hamme’s vision to life, the logistics of living the dream were murky.

But the community—of which the Garage Theatre is an active part—stepped up. A social-media campaign offering “executive producer” and “associate producer” credits for large donations was a success, and institutions like Cal Stage and Lighting and the Orange County School of the Arts provided equipment on loan.

“It’s pretty ridiculous,” Hamme says of the results. “I’ve never seen so many lights in our theatre before.”

The generosity that has enabled the Garage Theatre to mount Darkside is apropos the play itself. “So, what is the Good?” I asked Stoppard, meaning it as a bit of a joke, considering the broadness of the question. But he played along: “I think a competition of generosity would tend towards Good.”

Certainly all has transpired for the good of the Garage, which may forever be distinguished as the unlikeliest place to world premiere a work by one of theatre history’s true giants. (The Garage Theatre is calling their Darkside staging only the U.S. premiere, consider that it was first broadcast on BBC Radio; but the playwright says that to his knowledge the Garage is the first theatre company in the world to stage it.)

Stoppard has a laconic answer to Hamme’s question about why he gave a little place like the Garage Theatre such a chance: “Why not?” In fact, in a comment he passes along through me to the Garage he shows himself a bit grateful: “Thanks for giving Darkside a walk around your black box, an unexpected reprise which I appreciate.”

It seems that sometimes there is enough good to go around.

Tom Stoppard’s Darkside, featuring Pink Floyd’s The Dark Side of the Moon and a hell of a lot of lights, opens Friday at the Garage Theatre (251 E. 7th St., Long Beach 90813) and runs July 31 through September 6. Seating is VERY limited, so you best buy your tix in advance. For tickets, showtimes, and more information: thegaragetheatre.org.