Home News The Secret that Never Was
News

The Secret that Never Was 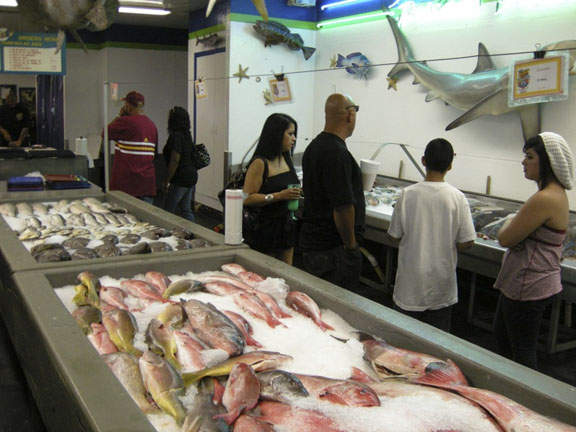 In early May, the Harbor Department began notifying tenants of the Municipal Fish Market that the department will enforce permit violations if tenants continued to sell seafood to people for personal consumption.

In doing so, the tenants are violating their lease because, by definition, selling to the general public makes a sale a retail sale, and therefore, in violation of the tenant’s permit, Port of Los Angeles spokesman Phillip Sanfield said.

The definition of wholesale is connected to who is buying. It involves large quantities of goods to be resold by others. It is therefore, not connected to the price of goods. Retail is the sale of goods to the public in relatively small quantities for use or consumption rather than for resale.

In an email, Sanfield wrote that the port confirmed that tenants were selling retail to the public as a result of a March investigation.

“If tenants engage in retail fish and seafood sales to the general public, then they need to comply with the California Retail Food Code and other relevant health and safety regulations,” Sanfield wrote. “Currently, tenants do not meet these requirements.”

Deputy City Attorney Janet Karkanen, a lawyer for the Harbor Board of Commissioners, is assisting the Los Angeles Harbor Department in the permit enforcement.

The Municipal Fish Market at the foot of 22nd Street, was built in 1951 as a receiving facility for fish caught off boats based in San Pedro. The fish market helped fishing companies increase their efficiency. It was associated with the expansion of the Main Channel following World War II. The fish market is important to San Pedro’s heritage going back to the first fish canneries established in 1912.

Sanfield said that the Harbor Department is enforcing the wholesale-only requirement because the building is on an industrial site that is not appropriate for access by the general public. And, retail sales of seafood require compliance with certain health and safety code requirements within that environment.

“There is more to it that they are not telling us,” said John DeLuca, president of J DeLuca Fish Company Inc., one of three companies at the Municipal Fish Market that was given notice of enforcement plans. “They mentioned they are concerned about safety—about people walking up on the dock—but whether you walked on the dock or I did, our safety is equally as important. So, I don’t think safety really is the ultimate decision…”

Sanfield said the port recently noticed an increase in customers at the fish market, which has been going on for years and is commonly known to locals seeking seafood bargains.

That’s not exactly true, DeLuca said. The fish market has had the same volume in customers for several years. But perhaps, because of the turnover in the Harbor Department, new personnel may not be aware of what’s been part of the port community for decades, he said.

“They [the port] don’t like the volume of people who are down here and I don’t think that should be the criteria,” DeLuca said.

While some people have considered the inexpensive prices at the Municipal Fish Market a local secret, DeLuca believes that secret ship sailed a long time ago, since social media has made the marketplace common knowledge.

“It’s no longer a little secret,” he said. “We get customers from all over.”

Cashier Kathy Edgard is one example. Every other Saturday, she gets up before dawn and drives 20 minutes from Los Angeles to the San Pedro market, where she can buy seafood at an affordable price. Then, she goes back home and cooks up a storm, making soups and ceviche for her family. But price is not the only reason for her early-morning trek.

“I am reminded of a place in [my] country where they sell seafood this way,” said Edgard, a native of Ecuador.”

But Edgard’s nostalgic pleasure may soon come to a halt if the Port of Los Angeles gets its way.

The Harbor Department’s crackdown on the fish companies can be seen as shortsighted, noted Jean DeFour, DeLuca’s assistant. People from out of the area don’t just come down to buy fish at reasonable prices. They eat breakfast and lunch locally and visit sites such as the USS Iowa or the Korean Bell while they are in town, she said.

“They do all kinds of other things that include the Port of Los Angeles and the [community] of San Pedro that is important to … [other] business,” DeFour noted. “They are kind of biting their nose off to spite their face because they are trying to stop something that brings in a lot of business for other businesses here in San Pedro.”

Oscar Arangulo, who cleans the fish at DeLuca’s, went a step further.

“In reality, this has been a tradition for years,” Arangulo said, in Spanish. “They come to have fun. They come with their families.”

The public has been able to purchase a whole fish at the market for what they would normally spend on just a few pounds at a supermarket.

While the port alleges that the companies are violating the terms of their lease, DeLuca, president of one of three companies at the Municipal Fish Market that were given notice of enforcement plans, noted that his lease states they are in the business of “wholesale fish and seafood sales.”

DeLuca said there is a murky distinction between what a seafood sale and a wholesale is, comparing it to Costco sales.

Costco sales essentially are retail sales, Sanfield said. He said that the permits allow the wording of “wholesale fish and seafood sales” in their lease allows tenants to engage in these sales to individuals and entities authorized to buy wholesale.

DeLuca said that a few weeks ago, the port called the three companies—J DeLuca Fish Company Inc., L.A. Fish & Oyster Co. and J & D Seafoods—into a meeting to discuss, “wharf updates.” However, the real purpose of the meeting was to talk about Saturday sales, he said.

The port followed up with a letter the following week after the meeting. DeLuca said that the letter also mentioned a “Farmer’s Market.” He said that while there are a multitude of vendors that have wandered into the area on their own, tenants have nothing to do with these businesses at the fish market.

Yet, Sanfield maintains that the issue involves any sale of food products to the general public, whether it is fish and seafood sold by the tenants or other products sold by unrelated individuals “who unlawfully set up a ‘farmer’s market.’”

He wrote that the port has offered to allow the tenants to pursue this option if they are interested in doing so with all the necessary permits.

“So far, the tenants have indicated that they are not interested in this option,” Sanfield said.

DeLuca, 62, has been selling fish since he was 15. He started with his family at State Fish Co. when his parents were still alive. Nine years ago he left the family business and opened up shop in the fish market under his own name.

“Therein lays the problem with the Harbor Department: a lot of these people don’t know the history of this,” DeLuca said.

The Future of the Fish Market

“I don’t think it’s their job to hurt our business or put us out of business and if they stay on this road right now, that’s what they are going to accomplish,” he said.

Donavan Kawaa of Valencia has been making the one-hour journey to San Pedro for two years. He goes from one fish business to the next to chose his seafood and to get the best price. He said the drive is worth it and he is disappointed about what the Harbor Department is trying to do.

“All businesses have the right to make a living,” Kawaa said. “I believe in giving everyone an opportunity to buy [seafood].”

The port plans to enforce their measure by forcing tenants to require that buyers provide a copy of a resale certificate, a business license or some equivalent document that shows the buyer is in the business of resale seafood or uses these products for commercial purposes.

“The port has asked us to ask for that [resale certificates], but now we are in the enforcement business. I don’t judge how people do their business. If they have a license or they don’t have a license, that’s not for me to police…I don’t believe I’m in law enforcement…I’m selling fish. That’s my line of work.”

Still, DeLuca is hopeful that something can be worked out.

“I for one would like to sit down and speak to the port one-on-one, as just a business person, and try to find a solution to a problem,” DeLuca said. “I don’t think selling fish is wrong.”