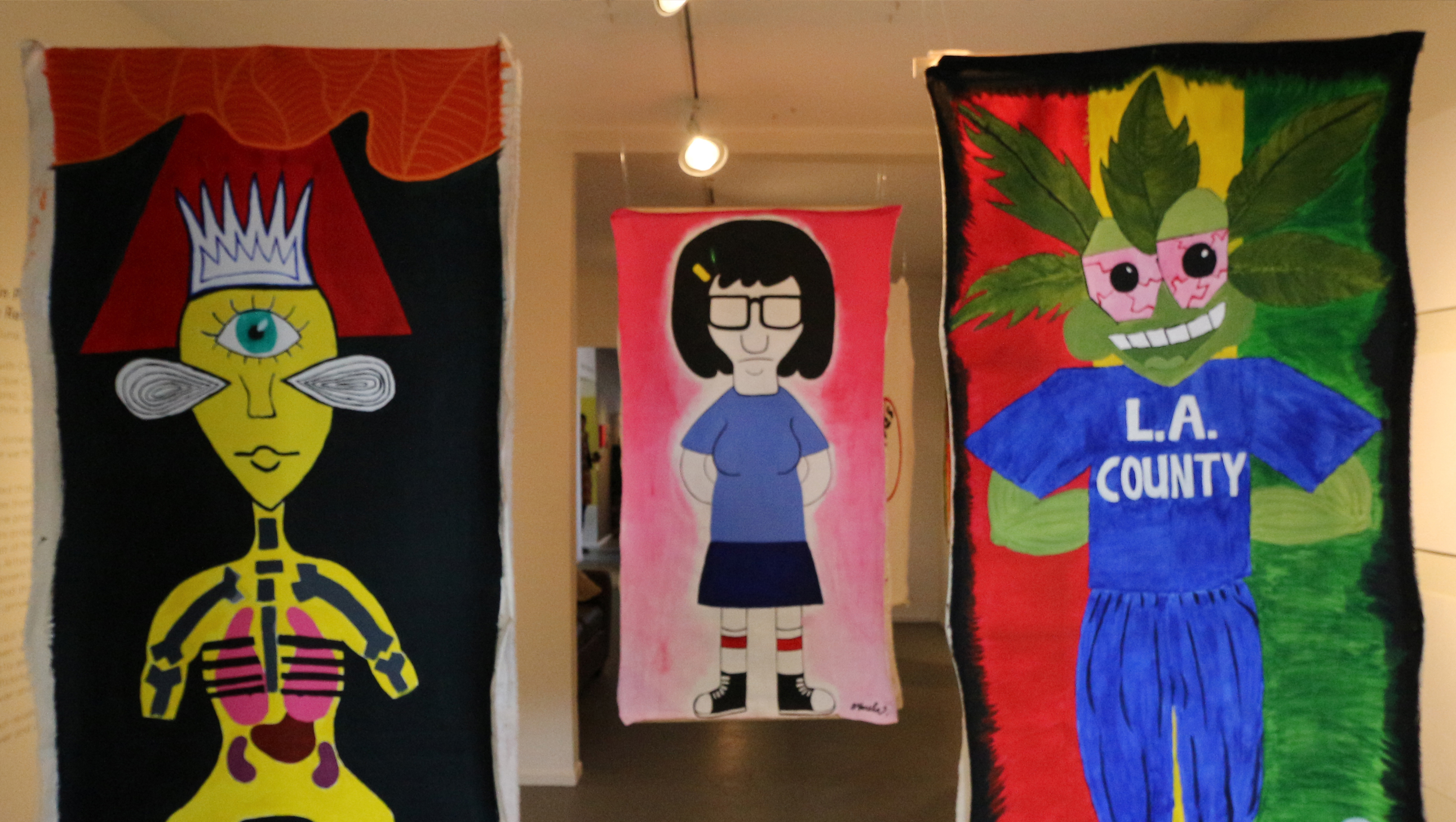 Although Abraham Lincoln freed the slaves 150 years ago, modern forms of slavery are thriving throughout the world. The housekeeper, the quiet young girl working in the nail salon or the teenage boy standing on the street corner could all be victims of human trafficking. Perpetrators profit from the control and exploitation of other human beings.

Inspired by their plight, tenth-grader Deandra Blade examined his relationship to freedom and containment, dominance and submission, and power within life in his first work of art. The result was a representation of the Emancipation Proclamation.

“The theme I was going for was the feeling of entrapment,” Blade said. “It started out as a tribute to the Americas and the Emancipation Proclamation just appeared…. I was thinking about the way some African-Americans feel entrapped.”

Blade was part of a group of students at Angels Gate Continuation High School who were asked to examine those themes during an intensive 18-week art program. The culmination of the program is Hidden in Plain Site: Creative Referendums to Human Trafficking, a powerful exhibition in the main gallery at Angels Gate Cultural Center.

There are a half–dozen eye-catching 3-foot by 5-foot, brightly colored acrylic paintings on canvas in the main gallery at Angels Gate Cultural Center.

The personal creations portray the lives of the young students who came to reveal their own familiarity with the topic of human trafficking. All but one of the student artists had no previous art training, but they have all produced highly individual, strikingly intimate works.

Funded by a grant from the Los Angeles Cultural Affairs Department, artists Jerri Allyn and Inez S. Bush worked with a group of 15 at-risk students. They were asked where they feel dominated, then researched and wrote essays about the subject.

“Three-quarters of the students admitted to feeling enslaved by addiction, three-quarters said they had an older sibling that they felt dominated by, and we discussed the potential for being vulnerable to trafficking in their own lives,” Allyn said. “During the course of the class, two students revealed that they believe they may have people in their lives who are victims of trafficking, confirming the ubiquitous nature of this issue.”

Walking into the main gallery at Angels Gate, the vibrant canvas paintings block traffic in the gallery. The hanging of the art was deliberate and intended to obstruct movement—reflecting the loss of freedom suffered by trafficking victims.

The work of Christopher Alvarez is among the first visitors encounter when they enter the gallery.  The theme of his painting is the bondage of drug addiction.

“People who are in jail are used for forced labor against their will, to make money off them. That is a form of human bondage,” Alvarez said.

A senior, he served a brief stint in jail. The red, black and green flag used in the background represents Rastafarian beliefs. The Rastafari way of life encompasses the spiritual use of cannabis and the rejection of the degenerate society of materialism, oppression and sensual pleasures.

A wild figure with bloodshot eyes is depicted in the foreground of his painting, representing the “average pothead.” It is not coincidental that the figure is wearing a jump suit that reads, “L.A. County Jail.”

A group of professional artists worked on their own representations of forced labor. Their art installations were placed in and around two cargo containers on the grounds of Angels Gate— representing one method of transportation used to smuggle workers.

Professional artists Allyn, Melissa Crandall, Katelyn Dorroh, Leah Laird, Christine Palma, Leah Solo, April Williams and Erich Wise featured their works in the cargo container installation.
Solo considers the real cost in the manufacturing of  toys such as Barbie dolls, which are assembled using child labor. Viewers are invited to use the objects to meditate on “enslavement” in this interactive installation.

Williams takes on the subject of the glorified “cool pimp,” who has worked his way into American pop culture by enslaving young girls into prostitution. Her charcoal series of a girl disappearing from vision, while the pimp lurks behind her, is beautiful and ominous at the same time.

Inspired by a model United Nations program, Hidden in Plain Sight: Creative Referendums to Human Trafficking will run through June 6 at several venues throughout San Pedro.
The full schedule of programming at Angels Gate Cultural Center is as follows: