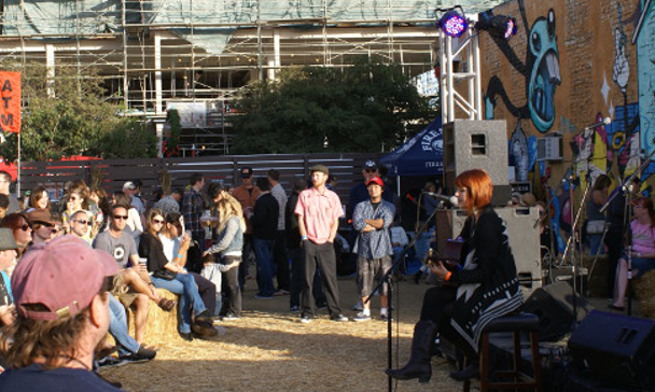 But there has been growth in recent years. The Promenade now fits into the conversation, there have been a few hints of connecting the corridor between Pine and the East Village Arts District, and we’re starting to see life on Pine north of 3rd Street.

One of the sparks occasionally igniting Pine Ave beyond 3rd Street is an undeveloped lot between 6th and 7th Streets. It’s a nothingness that may prove to be one of downtown’s greatest assets.

While it may seem counterintuitive to consider an empty lot an asset, open space provides unique possibilities, such as have been so effectively realized with events such as the inaugural Long Beach Folk Revival Festival in 2013, when over 2,000 paying customers turned out for 11 hours of folkish musical fare); and Summer And Music‘s Bicycle Drive-In, which saw the lot transformed into an outdoor cinema for a screening of Wes Anderson’s Moonrise Kingdom, allowing for a magical moment of drizzle just as the big storm started as the film revved up to its climax.

But those possibilities will evaporate into thin air if the lot becomes just another build site. And with the space up for sale, that is just what may happen.

It would be far from the first time Long Beach has let a unique asset tumble into oblivion. In fact, the city is in the process of losing one as you read this. Hidden in the middle of the 8th District is 11.5 acres of semi-wilderness that was the Will J. Reid Boy Scout Camp. But in fall 2013 the Boy Scouts of America (BSA) sold the site to Integral Communities, a self-described “diversified real estate development compan[y].” Integral is poised to turn the 8th District’s only such woodland wonderland into the Riverwalk Residential Development Project, a transition that will include “removal of all remaining vegetation [and] trees.”

Because the property was zoned as “Institutional” while the site was owned by the BSA—and still is—turning the site into a housing development requires the City to grant Integral Communities a zoning change for the project. While that has yet to be granted, Development Services spokesperson Jacqueline Medina declined to comment on whether anyone within the City of Long Beach has attempted to influence Integral Properties to retain any of the natural/scenic resources on the site, stating only that “the property is not protected in any way, and there is no prohibition against a private property owner from removing vegetation.”

Turning the Pine Ave. lot into a business requires no such change, just a buyer who does not feel the open space is more valuable to downtown than a build site—or who doesn’t care.

Long Beach resident Nima Nami, whose father purchased the lot in 1990, says he recognizes the value of the open space, and that ideally they would like to hold on to the property despite their need to generate income from it.

“I think it’s unique anytime you have open space in any downtown area. Whether it’s downtown Long Beach, downtown L.A., downtown you name it, an open lot is very unique and very attractive where you can have outdoor events,” he says. “[…] My preference is to hold on to it and keep it, if I can. If I had a good tenant that’s the right fit for the neighborhood, whether it be a restaurant or whatever, that’s my preference.”

Brian Ulaszewski—who has literally made Long Beach placemaking his business with his nonprofit urban design studio City Fabrick, which is spearheading the proposed Gumbiner Park and Terminal Island Freeway removal projects—sees Long Beach as “an ideal laboratory for creating innovative examples of how to repurpose, retrofit and develop a sustainable city.” And he points out that even if the lot is not the only patch of open space downtown, it has served the area well.

“There is no shortage of vacant land in the downtown with the Acres of Books and asphalt parking lots blighting the core separating the East Village from Pine/Promenade from the waterfront from North Pine from Wilmore City,” he notes. “That being said, the vacant lot on Pine across from the Molina complex is a perfect space for placemaking. It’s a reasonable size for an event, well contained by surrounding buildings, and well positioned between dense residential, daytime jobs and local serving commercial activity.”

Kraig Kojian, president of Downtown Long Beach Associates, hopes any development will be mindful of the inherent value of the open space.

“A number of involved and concerned stakeholders have had conversations with that property owner,” Kojian says (a fact confirmed by Nami). “If they want to sell it, let’s find the right buyer to do something with it. […] I think [the lot] is a very unique asset, and I think there are ways of being to able activate it even commercially while still being able to maintain the openness of it.”

Michelle Molina, whose Millworks and Party on Pine projects have played a major part in activating the lot in recent years with events such as the Folk Revival Fest and the Green Prix, agrees that the best permanent use of the space is one that preserves the adaptability allowed by the space.

“The asset is a space that can be flexible,” she says. “It’s not a gallery, it’s not a park, it’s not a music venue—it’s all of those things. It’s moveable and flexible. I think you want to look for those things, because that’s what creates energy in a neighborhood. A neighborhood isn’t the buildings: it’s the space between. It’s how people move from place to place. So that space is a pretty critical piece. […] We’d like to see something more permanent there, and we’d be willing to help [the current owners] make that happen. ”

In the meantime, all parties say they are hopeful that the lot can continue to be activated. A concept that Nami, Kojian, and Molina each bring up in discussing the possibilities is the “pop-up,” a concept that activates a space with a business or event that is pretty literally here today, gone tomorrow.

Nami goes as far to label pop-ups “an ideal use” for the space. Moreover, Nami says he and his father are willing to continue to allow interested parties to put on events on the site at little or even no cost, as they have done on multiple occasions.

That’s good news for North Pine, especially as it may be a while yet before anything permanent is in place. Although Nami says there has been a recent uptick in interest from potential buyers (“People are coming and sort of kicking the tires right now,” he says), various sources consulted by Random Lengths News opine that the $1.5 million asking price from the 11,250 sq. ft. lot is unlikely to find a taker in the near future.

Everyone seems to agree that having usable space on the spot is of value to the community. So Long Beach should hope all concerned parties come together with that view of the big picture in mind. Because once it’s gone, it’s gone.

Defend Us from Donald Trump: A Labor Day Plea to Police, Military