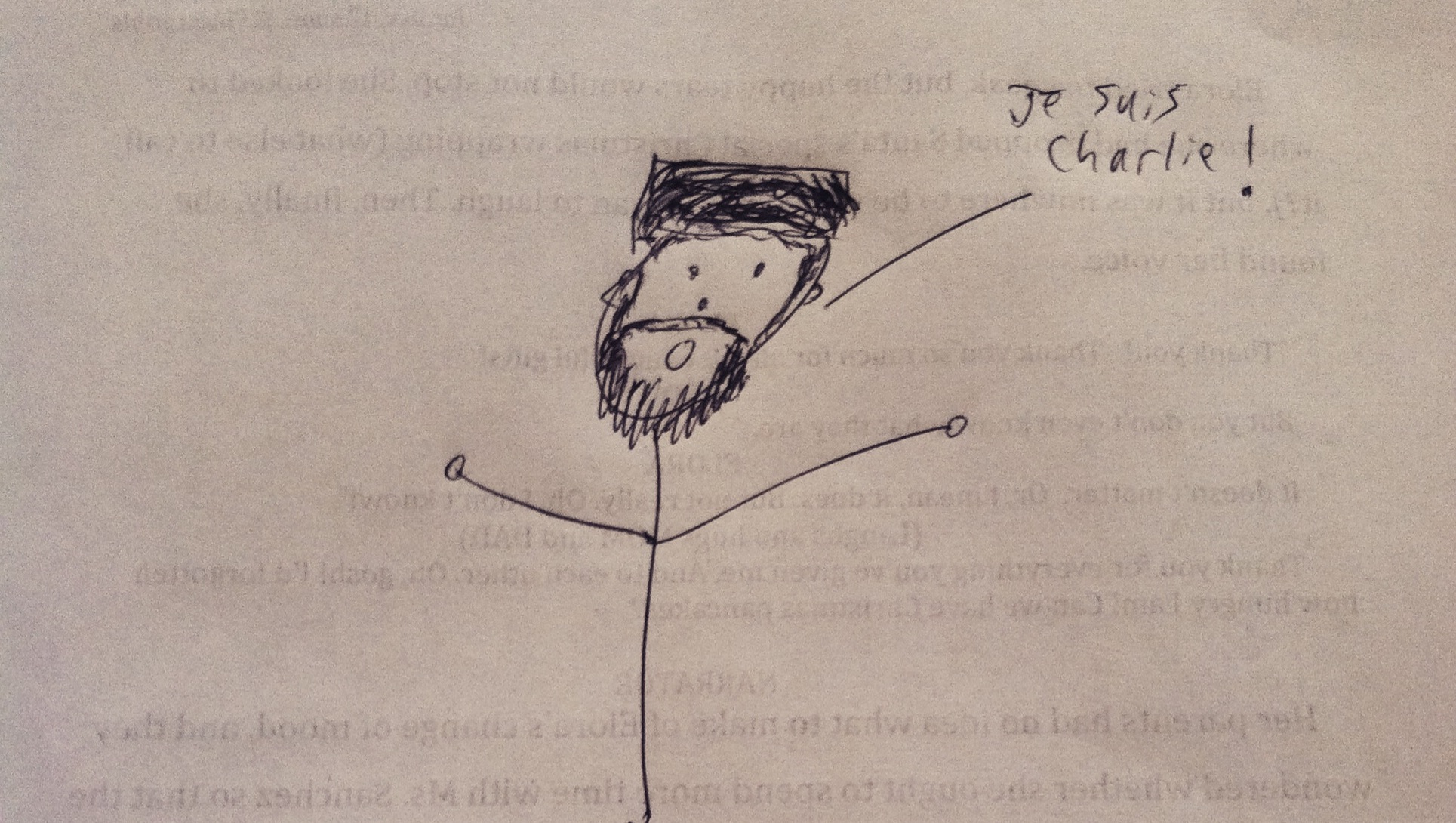 I had never so much as heard of Charlie Hebdo when I awoke to news of the murders in Paris last week. And I still knew next to nothing about the publication when I, along with millions of others, proclaimed my solidarity with the publication and its writers, along with the principle of free expression, by taking to social media with the hashtags #iamcharlie and #jesuischarlie, the latter reportedly becoming one of the most Tweeted hashtag in history.

What I did not have a grasp of until later was how divisive Charlie Hebdo has been over the years, with many charges of racism—particularly Islamophobia—being left at their doorstep.

I now have a sense of why, but I refuse to debate that matter on its merits, because in the context of the killings it is completely irrelevant. I am Charlie because when free expression is persecuted, I stand up for the expression, regardless of its content.

Say what you will about Charlie Hebdo: no-one can accuse them of being cowards. In 2006, for example, the magazine was one of the only publications in the world willing to reprint the drawings of Mohammad that had incited so much controversy when originally published by Danish newspaper Jyllands-Posten a few months earlier.

Nine years later, few major media outlets dare to display even benign images of Mohammad. The television network Comedy Central, for example, barred South Park from depicting Mohammad in both 2006 and 2010, despite having allowed a depiction of Mohammad in the 2001 South Park episode “Super Best Friends”.  Associated Press, the world’s largest news organization, censors all images of Mohammad, along with any “deliberately provocative images” (as an AP spokeperson told the Daily Beast), regardless of their newsworthiness.

Jyllands-Posten is one of those publications who have toed that line, and they admit to the real reason: fear. As the editorial staff explains* in a recent piece entitled “Violence Works,”

Some editors have tried to rationalize their decision [not to republish such cartoons] arguing that all are well aware [what] the drawings look like, and therefore there is no reason to bring them again and again. Well, we also know what [Danish Prime Minister] Helle Thorning-Schmidt, Barack Obama or the falling twin towers in New York look like, but it does not stop us from publishing pictures of them when they are the focus of the news flow. [… T]he reason why no one has reprinted the famous drawings, of course, fear. Everything else is excuses. Fear, however, is a legitimate feeling, not least for the employees of this newspaper. We have lived with the fear of a terrorist attack for nine years, and yes, it explains that we do not reprint cartoons, whether it be our own or Charlie Hebdo‘s. […] We are also aware that we therefore bow to violence and intimidation […].

If for no other reason than its mass and scope, the World Wide Web is far more robust in these fights than the print world ever was, and so the controversial Charlie Hebdo images are not hard to find. The Huffington Post, for example, republished a few of the newspaper covers that constituted part of the offense for which the murderers felt Mohammad must be avenged.

I shared the Huffington Post article on Facebook, a move that was greeted by my anthropologist friend, whom I hold in the highest regard, making clear her displeasure. “I actually think it is a shame that they republished these. (And I was disappointed to see your own version earlier),” she said, referring to a bearded stick-figure drawing— labeled “The Prophet Mohammad,” who I have saying, “Je suis Charlie!”—included with my #iamcharlie Tweet. “Of course I believe in free speech, and that Charlie Hebdo had the right to publish this in the first place, and certainly the violence this week in Paris has been horrific, but I don’t think we should be celebrating this racist, Islamophobic and frankly offensive (potentially hate) speech.”

The point she misses is that these acts are not celebrations of Charlie Hebdo, any more than finding Charlie Hebdo offensive is to approve of the murders. Sharing the content the murderers claimed as their justification is a means to highlight just how completely without justification the murders are. Many in the world who have heard of the Paris attacks will not have seen the images in question. To share them is to reify the idea that 12 people were murdered over frigging cartoons and nothing more.

On the other hand, to discourage or prohibit the sharing of the images—especially while talking about how terrible they are—leaves the conceptualization of the crime in a morally more nebulous state of the murders being perpetrated because the victims themselves did something so repugnant that we ought not to look at it, even when reading news articles about the killings, of which the drawings are undeniably a seminal part.

Had I been old enough to be cognizant of the pertinent issues in play when in 1977 the National Socialist Party of America maneuvered to march in Skokie, Illinois—a predominantly Jewish community where one of every six residents was a Holocaust survivor—I would have vehemently supported their right to march there or anywhere. The march never materialized, but let us imagine that it did, and that offended Jews gunned down a dozen Nazi marchers as they passed through Skokie’s main square. In such a case I would have felt compelled to stand in solidarity with the Nazis against the barbaric act of murdering those who offend us with their words, ideas, or mere presence.

This would not have meant I was standing in solidarity with Nazism. Even were I not Jewish on my mother’s side, even if one-quarter of my bloodlines did not run through Poland, even if I did not have relatives who perished in the Nazi death camps, I would hate the Nazis and all they stand for.

But when it comes to Nazism, I do have skin in the game, and yet I would unequivocally stand with the Nazis against any and all who would physically attack them over the expression of their horrendous ideas. This would not be my standing up for the Nazis’ freedom of expression so much as my own, because when it comes to freedom, there is—or should be—no dividing line based on taste or content, save perhaps for the “clear and present danger” limits on free speech, such as incitement to riot (see Brandenburg v. Ohio (1969) or the classic example of falsely shouting “Fire!” in a crowded movie theater (see Schenck v. United States (1919)).

It is never mainstream expression or opinion that needs protection: it is the minority opinion, the unpopular belief, the expression generally deemed odious. Our First Amendment is only as good as its breadth, and our lip service in favor of freedom of expression is worth only what we’re actually willing to do to support it.

Surely there is a time to debate the merits Charlie Hebdo‘s content—or even to protest and boycott the publication should one feel the world would be better off without it. But that time is not in the immediate wake of its staff members being murdered over that content. No matter how wrong the ideas expressed in Charlie Hebdo may be, that wrong is so far exceeded by the wrong of murdering people for expressing themselves that the only appropriate response is to stand against the attackers and all they represent.

This isn’t about a magazine or its cartoons. No matter what Charlie Hebdo has published, #iamcharlie #jesuischarlie.

*Note: For the purposes of this article, the original Danish text of the Jyllands-Posten editorial was rendered into English by Google Translate.