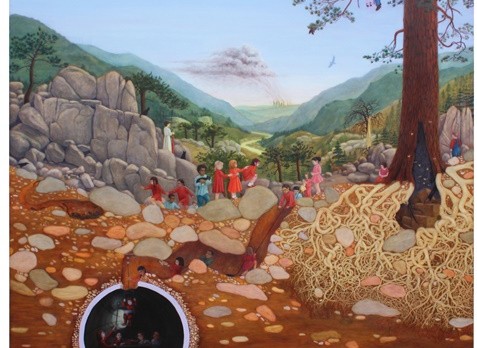 The Torrance Art Museum presents, Prep School, Prepper & Survivalists Ideologies and Utopian/Dysotpian Visions, an exhibition with a big title that addresses what is the biggest challenge to humanity.

The ambitious show includes work by 29 artists, who look at the realities of living in a society that rarely seems to work, and surviving on a planet that is burdened with the effects of overpopulation and climate change.

In the exhibit statement museum Director Max Presneill states:
“The increased understanding that we all need to be ready, at all times, has found its way out of the paranoid fringes and into the mainstream, thanks to the televised realities of the aftermath of disasters around the world and the New Orleans hurricane’s impact in particular. Combined with the loss of faith in official and governmental structures to agree and then to act on our behalf we can identify an uncertainty in this country that affects us all.”

The uncertainty that Presneill refers to reaches around the globe. Artists in this powerful show reflect on environmental threats brought on by global warming that threaten the future survival of the planet.

“Global warming poses a growing threat to the health, economic prospects, and food and water sources of billions of people” top scientists said in the report, which urges swift action to counter the effects of carbon emissions.

“Unless we act dramatically and quickly, science tells us our climate and our way of life are literally in jeopardy,” said U.S. Secretary of State John Kerry, in a statement. “Denial of the science is malpractice.”

It is a grim prospect for the millennial generation, which has inherited this reality. Art can reflect the horrid and the harsh. Artists have always served as public voices to bring attention to the grim, as well as the beautiful in life. The artists in Prep School confront this issue head on. Included are potent works describing the natural disasters that have become a regular occurrence on the daily news and how we may each find ways to survive — or prepare to survive — in a post-apocalyptic world.

Presneill arrived in California from London in 1997. He noted that one of the first things that struck him were packages that all his friends carried in their cars.

“When I asked them, ‘Why?’they said, ‘Well because we live in an earthquake territory,’” Presneill recalled. “Also as [Torrance] city employees, word came down from on high that we should probably have an emergency bag in our cars. A number of other conversations that I had made me start to think about Zombie movies and it all seemed part of a package of a millennialist zeitgeist. I began to see links between pop culture and this way of thinking that the end of the world is not that far away, even if it is only metaphorical.”

When Presneill began researching survival groups online he discovered a vast array of perspectives on the subject. One topic widely discussed was what can we expect if society disintegrates. “What does society owe you and what do we each owe to our society if the shortages predicted by the United Nations report should come to pass?”

“The show is not so much about what an apocalypse might consist of, but more about what people think could happen to them afterwards,” Presneill said.

Coming back to Presneill’s original inspiration of his friend’s earthquake kits, artist Allison Stewart presents of a variety of survival kits in a photo series. The kits contain diverse supplies.

“If you look at the contents, some of the bags are practical,” Presneill said. “There is a first aid kit, with water, etc. Other people want guns in their bag or bottles of wine.”

There is the dichotomy of those who think, ‘I just need to get through for a little while’ and those who think, ‘It’s me against the world.’”
Los Angeles artist, Vivian Sming has installed a series of 10 large inkjet prints, covering disasters around the globe. The pieces have titles such as “Icelandic Volcanic Ash Creates Air-Travel Chaos”, “April. 15, 2010; Scores Dead”, “Hundreds Feared Missing, Aug. 10, 2009” and “Severe Flooding in Pakistan, Aug. 6, 2010”. They are a reminder of the regularity of natural disasters in the news.
[portfolio_slideshow id=6703]

In her artist statement Sming wrote:
“As an artist, my concerns around objectivity stem from a greater interest in how we regard others—others being human and non-human, living and non-living. Objectivity is just one aspect of how we come to understand another.”

A different perspective is taken by Pasadena artist Siobhan McClure. The artist uses children to represent the post-apocalyptic world. In her oil paintings children survive in a subterranean environment, contemplating life in the above ground world left behind by war and environmental collapse.

Prep School is the latest step in an entirely new direction for the Torrance Art Museum, since hiring Presneill as director. The venue historically exhibited traditional figurative and landscape works from the Torrance Art Group and the South Bay Watercolor Society. Presneill’s experience managing the Mark Moore Gallery, his own Raid Projects at the Brewery in Los Angeles, plus years of curating contemporary exhibitions internationally have brought a sea change to the small museum. This new direction could easily place the museum on the map of “must see” art venues in the Los Angeles area.

Presneill concludes his statement on the show with this statement:
“Over the last decade there has been a slow snowball of factors that have contributed to this exhibition. They range from popular culture to the Constitution, from economics to isolationist tendencies. Together they have acted as the backdrop to the discussion regarding what makes ‘Us’ from United States. What links us together and how can these bonds stand strong against the pressures to dissipate that sense of unity.

“There are some shared ideals in what we regard as the best of America. To reflect on those aspects this exhibition faces what is the apocalyptic outcome of ignoring them — a drastic and melodramatic step, yes, and taken as much for its entertainment value as its ability to focus our attention on the more serious issues at stake.”
Serious issues indeed. It is hard to disagree with Presneill on this topic.
Details: torranceartmuseum.com
Venue: Torrance Art Museum
Location: 3320 Civic Center Dr., Torrance, 90503