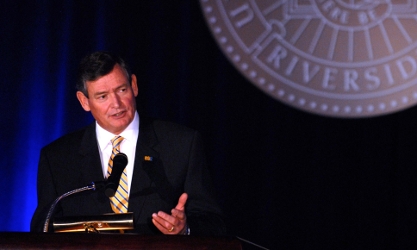 With Gov. Jerry Brown in the audience, White stressed that the state must invest more in improving graduation rates and shortening the time it takes to get a degree, as well as increasing access for low-income students and upgrading aging infrastructure on its 23 campuses.

General Fund increase to both UC and CSU, and that the first installment of a four-year investment

plan to provide steady and predictable state funding increases through 2016-17. These

multi-year investments, however, are contingent on the segments holding tuition flat at

expects the segments to use these funds to maintain affordability, decrease the time it takes students to complete a degree, increase the number of students who complete programs, and improve the transfer of community college students to four year colleges and universities.

White said he will push hard to have $50 million — which could be a combination of state support, student tuition, foundation and business contributions — go toward the seven key areas he outlined to improve student achievement.

White linked the CSU’s ability to churn out a million more graduations by 2025 to a healthy economy in the future.

To accomplish that, “CSU will invest an additional $50 million in seven key areas designed directly to advance student achievement and high-quality degree completion,” he said.