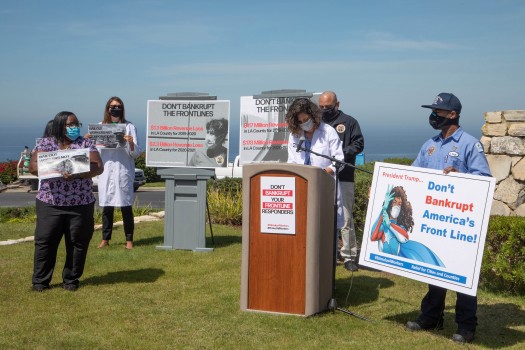 Workers on the front lines battling the coronavirus protested at Trump National Golf Club in Palos Verdes this past week. These essential workers, like so many in groceries, warehouses and meatpacking plants demanded federal financial relief from the federal government as they continued in their jobs.

Nurses, health care workers, sheriff’s deputies and a group of city and Los Angeles County workers demanded that the president and administration provide federal financial relief to keep local public sector employees from being out of work.

“I’m here today because I see the suffering in the halls and family members are not allowed to see their loved ones and they’re dying alone. This is something that we never saw before, in all my years, 20 years of nursing, cancer doesn’t even kill you that fast,” Theresa Monroe, Registered Nurse, LAC+USC Medical Center, told Patch.

Kroger-owned grocery stores (Ralphs and Food 4 Less), across the West notified essential grocery workers that starting May 17, the company will cut the $2.00 an hour bonus called “Hero Pay.”

“We’ve been working long hours, under enormous stress and risk of becoming infected and bringing it back home to our families.  We come to work, committed to do our job and serve our communities. For Kroger to put an expiration on our hero pay for our sacrifices is insulting,” said Janelle Alva, a cashier at Food 4 Less.

UFCW local unions call on the public to support these #essentialheroes in California, Colorado, Oregon, Washington  and Wyoming. They are asking Kroger to maintain hero pay, improve store safety practices and provide testing to all employees.

Carlos Ernesto Escobar Mejia, a detainee in San Diego, became the first to die of COVID-19 while in Immigration and  Customs Enforcement custody. His death occurred just one day after the 9th Circuit Court of Appeals overruled a US District judge’s ruling to decrease the population at California’s Adelanto ICE processing facility, one of the largest immigrant detention facilities in the country, to a level that would allow the remaining detainees to maintain a social distance of six feet from one another.

Rent strikes are spreading in Los Angeles and across the country as economic desperation compounded by the pandemic further worsens the housing crisis and radicalizes tenants. Membership in the LA Tenants Union has more than doubled since the start of the crisis, and most of their now 8000 members participated in a citywide rent strike on May 1. These strikes are estimated to be the largest since the 1930s. According to one estimate, the federal government could expand existing housing subsidy programs to cover all qualified low-income renters and those newly eligible due to the pandemic for just $100 billion a year, a mere fraction of the trillions handed out by Congress to large corporations in the series of bailout bills passed already, or the $10,000 per second earned by Amazon shareholders and executives.

As millions of Americans are waiting for relief, the fossil fuel industry has pushed its way to the front of the line and Trump rolled out the red carpet. The administration has set up a $500 million dollar fund for big oil relief. We the people need to tell Congress to divest that money to the people that need it.

This week, Sen. Merkley and Rep. Barragán introduced the “Resources for Workforce Investments, Not Drilling” Act or ReWIND Act. They want to ensure that any funds used are invested in people and not polluters.

The REWIND Act would: