A Silent Killer Behind Bars 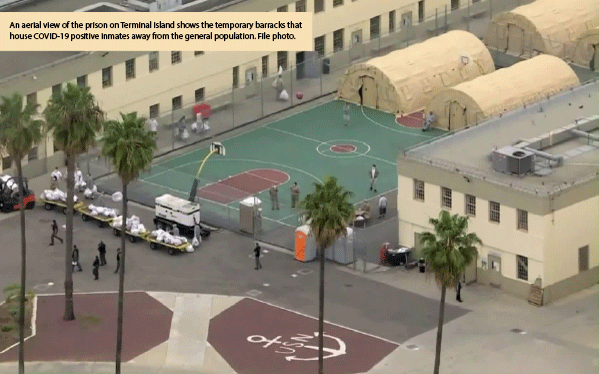 A Silent Killer Behind Bars

Activists take to the streets, courts to protect the incarcerated from COVID-19

Few know it, but San Pedro is home to one of the hottest COVID-19 hotspots in the nation. That’s why a week before Mother’s Day, more than a dozen family members and friends of inmates at the Terminal Island Federal prison picketed outside the facility’s gates, to demand better treatment for their loved ones. Few local residents know that this prison exists right across the main channel from the rest of the town, nor that terminal Island is considered “East San Pedro” both historically and by federal authorities. So most of the cases reported are attributed to San Pedro infection numbers reported daily by LA County.

It has been reported that the inmates have been locked down in their cells without the ability to make phone calls since the middle of April. Prison officials have said prohibiting phone and internet use was necessary to prevent the spread of the virus.

The family members who were demonstrating have said that the prison guards have threatened the inmates with solitary confinement in a special housing unit for asking for help from the outside or refusing to work in the kitchen.

This is especially true considering COVID-19 is so widespread at the facility. Barragán referenced news reports of families not hearing about the status of inmates until they are very sick. This is not acceptable, the congresswoman said.

Barragán noted that while a number of families have reached out to her office, she’s not sure if any of them were among the protesters at the Terminal Island prison on May 2.

But of the calls that her office received, many were from family members requesting welfare checks on their relatives and reporting they were unable to communicate with inmates via telephone or email and want information.

“Many are concerned because they said their inmates are medically vulnerable, with asthma and high blood pressure,” Barragán said.

Some family members called Barragán’s office to lobby U.S. Attorney General William Barr to expand the home confinement order to include inmates at Terminal Island. The order to which Barragán was referring was a March 26 memo Barr sent to the Federal Bureau of Prisons.

In the memo were a set of guidelines and criteria by which to determine the eligibility of inmates for home confinement, which included: age and vulnerability to COVID-19, security level of the facility holding the inmate, with priority given to inmates in low and minimum security facilities, good behavior, an inmate’s score on the risk assessment test Prisoner Assessment Tool Targeting Estimated Risk and Needs and the presence of a reentry plan among other criteria.

Others who have called Barragán’s office called to complain about the conditions in which infected inmates are held.

One family member called to report that about  60 inmates were recently relocated to a very unsanitary warehouse without heat, hot water or air conditioning, as well as only three showers and three toilets, Barragán said.

She reported that the family alleged there was constant leaking due to holes in the ceiling and that animals, such as rats, bats, pigeons, skunks, cockroaches and raccoons have free reign in the facility.

Barragán has queried the Bureau of Prisons and the warden for the Terminal Island facility about the conditions in the prison, but the answers have been few and unsatisfying.

LA County jails not much better

The litigants are demanding that the sheriff implement constitutionally mandated procedures to protect prisoners from contracting COVID-19, and to comply with guidelines issued by the federal Centers for Disease Control and Prevention and California Department of Public Health. Activists hope Los Angeles will take actions to mitigate the spread of the virus and release people at high risk for serious illness or death in the event of COVID-19 infection due to age or underlying medical conditions.

Rodney Cullors is one of the plaintiffs in the lawsuit that was filed on Friday April 24. The 58-year-old, who was in Men’s Central Jail at the time the suit was drafted, suffers from hypertension, heart problems, spinal damage requiring use of a wheelchair, bipolar disorder and manic depression. Plaintiff Jessica Haviland is a 39-year-old woman who was in the custody of Century Regional Detention Facility and had been exhibiting symptoms of COVID-19 and was not tested. Other plaintiffs are in similar situations.

In the complaint, the coalition cited epidemiological research that “during pandemics, jail facilities become ‘ticking time bombs’ as ‘many people are crowded together, often suffering from diseases that weaken their immune systems, form potential breeding grounds and reservoirs for diseases.”

The lawsuit goes on to say that although the California Department of Public Health issued a guidance about novel coronavirus, or COVID-19, for California prisons recommending the provision of sanitization supplies for prisoners to clean their cells and masks to symptomatic prisoners, increased cleaning of common spaces and social distancing of six feet; these measures have not prevented the virus from spreading in California prisons.

As of April 23, a total of 149 prisoners and at least 105 staff in the California Department of Corrections and Rehabilitation facilities tested positive. News media reported that in April in the California prison system, within the course of just more than a week, the number of prisoners testing positive for COVID-19 grew by 700% and the number of staff testing positive nearly tripled.

The Bureau of Prisons says it has begun daily testing and testing of asymptomatic inmates at its prisons in order to keep up with the rapidly evolving nature of the public health crisis. As a result, it said its data reflects an increase in the number of COVID-19 positive tests. As of last count, there are 51 Bureau of Prison facilities and 22 residential reentry centers with confirmed active cases of the coronavirus.

By the bureau’s count, the Lompoc, Calif. Facility, with 842 inmates and 11 staff members testing positive for the virus, had the highest rate of infection out of all the federal prisons in the United States, but the Terminal Island facility is one of the deadliest, tied for second with Butner Medium Security Prison in Butner, N.C., and Oakdale Prison in Oakdale, La. The prison with the most COVID-19 deaths thus far is Elkton Prison in Lisbon, Ohio.

But a scroll down the list shows the number of infections quickly dwindling from three digit numbers to the single digits after 17 prisons or residential reentry centers out of more than 80 bureau facilities. Some of these places are in counties with the highest per capita infection rates in the country.

Yazoo City, Miss. has one inmate and five staff members infected with COVID-19.

In each of these cases, the per capita infection rate in their respective counties exceeds the national average.

Three weeks after Attorney Gen. William Barr’s memo, the bureau’s results are modest: the number of people allowed to serve the rest of their sentences in home confinement went up by only 1,027 under the new guidance set out by the attorney general. This is about half of 1 percent of the more than 174,000 people in the bureau’s custody at the start of the month, according to data obtained from the bureau and Congress. One of those was President Trump’s former lawyer and fixer, Michael Cohen. He was released early from federal prison and moved to home confinement because of the coronavirus pandemic, according to a person familiar with the matter.

The Marshall Project, a nonprofit journalism outlet about criminal justice, reported last month that in one recent court filing, prosecutors unsuccessfully opposed the release of a man from Oakdale prison, in Louisiana, arguing in part that the bureau was taking sufficient care of prisoners there — even after the virus had killed five men.

In a separate case, a judge labeled the Bureau of Prisons’ process “Kafkaesque,” and said it prevented many releases. Critics, including groups advocating for mass releases to reduce prison outbreak of the virus, have called the implementation of Barr’s memo confusing and chaotic.

Update: As of May 13, there are 140 inmates and 15 staff members who are infected. There have been seven inmate deaths and no staff deaths. Five-hundred-and-sixty-two inmates and no staff have recovered from COVID-19, a day after Rep. Barragan visited Terminal Island prison.