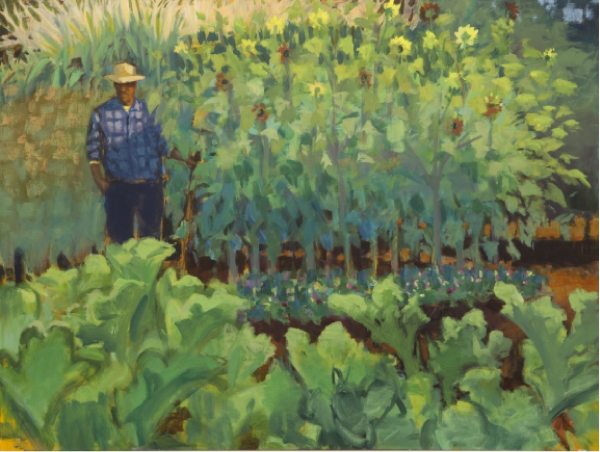 “The theme of farmworker is quite relevant for many Latinos and Latin American artists, something really meaningful. Not only as artistic inspiration but also as a political and social flag.”

This past March, Gabriela Urtiaga, the chief curator for the Museum of Latin American Art, highlighted the “essential worker”— a term that’s been brought to the forefront by local and state leaders since stay-at-home policies were instituted in an attempt to arrest the spread of the coronavirus — in a series of Facebook posts in honor of labor organizer and civil rights activist, Cesar Chavez.

The Facebook series featured images of the works of several artists depicting who, in this current context, we would call essential workers — people who are growing, picking, packaging and transporting our food.

The first work Urtiaga featured in the series was Javier y el Jardín, by the late San Pedro artist, Richard Lopez, [1943- 2013]. He earned his master’s and bachelor’s degrees from California State University Long Beach, and became a professor of drawing and painting from 1974 to 2005.

Lopez’s Javier y el Jardín, an acrylic painting on canvas in MOLAAs permanent collection, depicts Javier, a farmworker. He wears a hat and work clothes. Amid a verdant field, he looks over crops with a tool in hand. Beside him, bounteous stalks of sunflowers spring upwards with life. The piece portrays with lush abundance a day in the life of a farmworker.

Urtiaga noted it’s a poetic painting — powerful and evocative with an interesting use of the color palette, with bright and strong tones. It’s an expressive piece with beautiful details.

“This painting is really particular because the artist imagines and visualizes a farmworker in his own environment, around nature, where he works hard every day, in a strong connection with the landscape,” Urtiaga said. “The farmworker maybe is having his break after a hard day of work, maybe thinking about someone or something in a melancholy way. It is a very bucolic scene.”

Solimar Salas, the museum’s vice president of content and programming and Alexa Ortega-Mendoza, marketing and communications manager, spoke on the challenges of keeping the museum relevant and engaging the culture at large while we stay at home.

“How do you define what is an essential worker and who?” Salas asked. “Institutions have had to make really hard decisions. It’s a tough call because everyone is essential.”

As residents have adapted to life under safer-at-home measures, local governments have had to strike a balance between restricting the movement of workers to halt the spread of the coronavirus but not so much to cause long-term harm to the economy.

On March 19, Gov. Gavin Newsom issued an executive order that established the nation’s first statewide shelter-in-place. Days later, the Department of Homeland Security created an advisory list of industries and workers “essential” to fighting the pandemic. It includes 14 employment categories that DHS identifies as essential critical infrastructure workers. From there each municipality identifies its essential services. Of these, farmworkers play a vital role in the lives of Americans.

In the context of pandemics, who we consider “essential workers” hasn’t changed much in recent centuries.

During the 17th century Great Plague of London, essential workers were often poor and female but weren’t quarantined because their labor was essential. Guards enforcing the quarantine, nurses treating patients at the “pest house,” the “searchers of the dead” comprised mostly of impoverished older women hired by London parishes and grave diggers for the mounting number of deceased were all called essential workers.

Since that time, what defines an essential worker has grown exponentially. The difference between then and today is that some of these jobs pay more and hold more prestige, like medical examiners or coroners. The industries they support have grown too — not to mention the society they carry. In our complex, modern-day system with millions more workers, still, how do we as a society take care of our essential working people?

Now, essential workers do much more than attempt to control the plague, though many of these jobs are still arduous and receive low pay. With farmworkers tied crucially to food security and access, it’s taken a pandemic to stress how acutely we are affected by the short food chain link. It has just started to be recognized through Newsom’s executive order, which supports California food industry workers — including farmworkers — with two weeks of paid sick leave. It’s just a start. 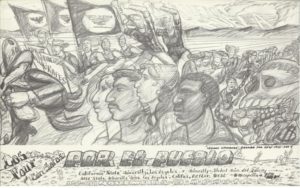 Los Four, the Chicanx artist collective consisting of Frank Romero, Carloz Almaraz, Robert de la Rocha, Gilbert “Magu” Lujan, and Judithe Hernández, was a politically active group that worked with César Chávez and the United Farm Workers in the 1970s. The title of the poster and exhibition translates to “for the people we are still fighting.”

The team at MoLAA continues to observe and absorb the manifestations of the pandemic upon the culture at large.

“The process for the team [that week] was Cesar Chavez Day,” Ortega-Mendoza said. “Exploring what artworks we had, highlighting him and also highlighting artworks others submitted to #MOLAAConnects, [on MoLAAs Facebook page] including a mix of what we have in our collection.” 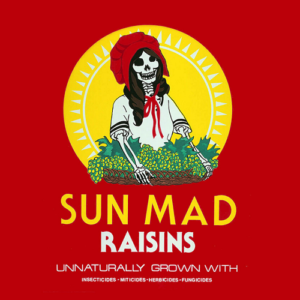 Ester Hernández is a San Francisco-based Chicana visual artist best known for her pastels, paintings, and prints of Chicana/Latina women.
Her most famous image – the screenprinted poster Sun Mad, shown here, was first created in 1981 and expresses her anger at the human and environmental cost of pesticide use in commercial grape growing in California.

“MoLAA will also show the first retrospective about Judy Baca next year,” Urtiaga said. “A unique Chicana artist well known for her very famous mural in honor of Chavez.”

“In these tough times, where we have to deal with an unpredicted crisis followed by uncertain consequences, it is absolutely crucial the role of the essential worker in our society,” she said. “I hope this crisis teaches us to be more wise and careful about that. This is why art is so necessary…. Because art and the artists’ are powerful tools to make a change, to build bridges and engage people with new ideas, knowledge and beauty.”