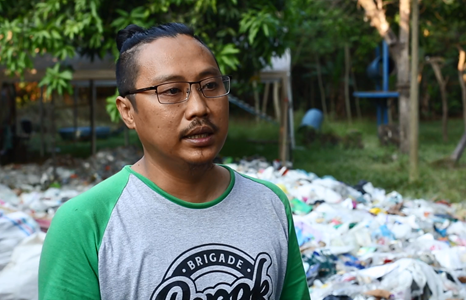 In a powerful presentation by Indonesian environmentalists, Prigi Arisandi, the executive director of ECOTON and his daughter, Thara Bening of River Warriors, members of the #breakfreefromplastic movement appealed to Los Angeles environmentalists at a Los Angeles coalition meeting of the Plastic Pollution Coalition.

Prigi is a scientist turned activist whose dedication to protecting people and biodiversity within a 300 kilometer stretch of river that runs through Surabaya earned him a Goldman Environmental Prize.

“Indonesia is the second biggest source of marine pollution after China, with diapers being the primary problem, representing 20% of all the river pollution,” said Thara. “People burn or dispose of their trash in the river because the government has not provided any garbage collection. 99% of our rivers are polluted, by the amazing number of 1.5 million diapers, 40% of which enter our rivers.” She continued to explain how only 30% of the population has garbage collection. So, she formed an organization based in high schools called REWIND (River Warriors Indonesia) and is leading a “diaper brigade” to reduce disposable diaper pollution in rivers across Java. The organization is also pushing the government to ban single-use plastics and to provide waste collection. They organize river cleanups and have also discovered microplastics in 80% of the fish collected.

Prigi explained, “Indonesia imports paper for recycling. However, the paper brokers, including those from Los Angeles, are stuffing plastic illegally into the bales of paper and we don’t want your plastic anymore! It is hurting our paper recycling and creating tons of waste we cannot dispose of.”

Michael Doshi, representing Algalita, added that, “There are 340 U.S. material recovery facilities. The waste brokers are private businesses and they dress up the bales to appear as if they are all paper and contain no plastics. These bales are being sent from the Port of Los Angeles and Long Beach. More than 20 villages depend on picking through the plastic and paper as jobs. Plastic is sold to a tofu factory for fuel because it is 10 times cheaper than burning wood. But the problem is the dioxin and other poisonous chemicals that are emitted thru burning.  Plastic ‘farmers’ are paid two dollars a day to pick through the plastic looking for high value items such as bottles.”

For more information on this and campaigns such as the Last Plastic Straw visit: plasticpollutioncoalition.org.

Plastic Pollution Coalition a growing global alliance of more than 1,000 organizations, businesses and thought leaders in 60 countries working toward a world free of plastic pollution and its toxic impact on humans, animals, waterways, the ocean and the environment.