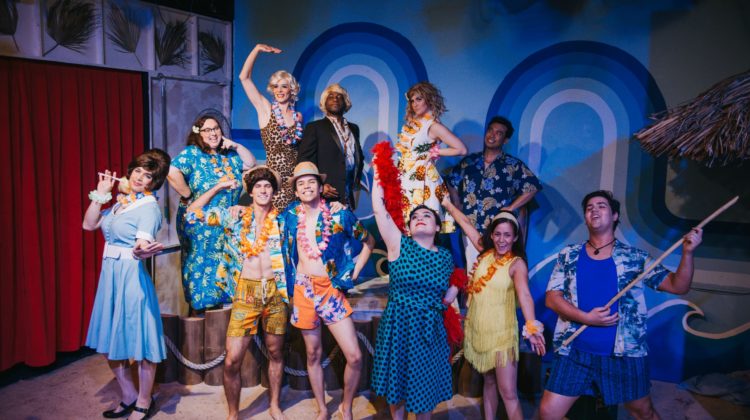 It may be different on Broadway and for a handful of behemoths in major media markets. For the vast majority of theatre companies, however, plying their trade is mostly or even completely a labor of love, where even sold-out runs come up short of netting a profit, let alone the kind of money for thespians to make ends meet without a day job.

Imagine, then, what life in the time of COVID-19 is for theatre folk ‘round here. Not only are they dealing with the same battery of issues plaguing the rest of us, but they are doing it while having to cancel shows into which they’ve invested blood, sweat, and production expenses.

As their name implies, Little Fish Theatre is not one of the biggies. Founded in 2002, the Little Fishers lovingly converted San Pedro’s old city tow yard into a quirky theatre with an upstairs lounge, an unusually long stage space for a black box, and tiered seating on three sides for 65.  Despite only the single stage, they put on about a dozen plays per year, not including their annual opener, “Pick of the Vine,” a compilation of nine short plays culled from hundreds of submissions. Throw in a few one-night-only events, and these are the busiest bees in area theatre.

That crowded schedule is likely to cost them dearly during the pandemic shutdown. According to Associate Artistic & Development Director Suzanne Dean, at best Little Fish will be forced to cut one show from their 2020 season. And while they hope they can reschedule the remainder of the run of Dead Man’s Cell Phone, which opened February 27, as of now it’s crossed off their website calendar, as is Becky’s New Car (scheduled to open April 9) and a one-off event slated for April 26. Even if the following play, Stop Kiss, opens as scheduled (May 21), the damage will be done.

All this for a company that may not show a profit in the best of years. “We operate on very slim margins,” she says. “[…] Some productions finish in the red, and a show like ‘Pick of the Vine’ or whatever we have over Christmastime helps ease the overall loss. When we have unexpected facility costs ― as we did in 2019, with a costly plumbing issue or the years before with new chairs and renovations ― we were very in the red.”

The best news Dean reports is that Little Fish’s landlord “is responsive to our situation, [and] I am optimistic we’ll come to an arrangement that will assist our situation for the immediate time period.”

In any case, Dean says that, one way or the other, Little Fish intend to honor the contracts of cast and crew for the Dead Man’s Cell Phone and Becky’s New Car, regardless of what comes, “and we’re seeking donations to be able to keep paying the handful of staff and monthly bills as long possible during the shutdown ― [because] we have miniscule reserves, [enough for] a few weeks only.”

Across the bridge in Long Beach, an even littler fish is the Garage Theatre, who for the last 20 years have shown the gumption to stage ― in a space that maxes out around 50 ― everything from Shakespeare, DeLillo, and Ionesco to melodrama and farce to newish hot-button works (climate change, queer culture) to a Trey Parker/Matt Stone musical and a world-premiere staging of a Tom Stoppard radio play so good that the man himself dispatched people from England to grant his official stamp of approval. Forced to halt their season opener, Psycho Beach Party, early in the run after spending over $5,000 to get it going, and with only four other shows scheduled for the season, this is a company with no margin to cope with a situation like this.

“We really rely on our first production to get us back to a place of financial security for the rest of the season, especially for when we throw out some of our more challenging productions later in the year,” says Managing Director Eric Hamme. “[…] We don’t have a reserve fund, and everything we did have was put into getting the season up and running. We also thought we were making a smart decision in remodeling our bathroom over the break, and that set us back around $600; and our box office software broke down at the end of last year so that had to be replaced for about $400. Then theBecky’s New Carre is the $1,300 a month overhead (rent and utilities), concessions purchased, and facility supplies such as tools, paint, toilet paper, etc. Relatively small numbers, but it adds up quick. […] I haven’t spoken to our landlords, but there will need to be a discussion on the 31st, because right now we can maybe squeak into April ― but after that, we are tapped. If Panndora Productions’ [i.e., a troupe to whom the Garage occasionally sublets] performance doesn’t happen [May 2–17] and we lose that revenue, we won’t have the resources necessary to get us to our next production [Stephen Aldy Guirgis’s The Motherfucker with the Hat] in mid-July.

With even less reserves than Little Fish, should Psycho Beach Party be fully cancelled ― Hamme holds out hope that the COVID-19 crisis may pass in time “to sneak in a few more performances, [… but] a lot of chess pieces [would] need to be moved around” ― the Garage will not even be able to provide crew members with their usual small stipend (“basically gas money,” Hamme says, “but they appreciate it”). Garage actors are paid purely through donations to a Feed the Actors fund that amounts to even less.

The only big hit the Garage won’t take is on refunds. ”Our audience is notorious for buying last-minute, and we love them for that,” Hamme says. “[… Plus], it’s only a month between our season announcement and opening night, so it always takes a little time for ticket sales to start to ramp up. This show is also scheduled for a six-week run (as opposed to our typical five weeks), which gives people more time to put it off.”

Hamme is every bit as appreciative of Garage supporters as was the vociferous (as in: I had to wear earplugs ― literally), overflow (extra chairs set up against a wall) audience for Psycho Beach Party opening night.

“So far ticket-buyers for about half the cancelled shows have been willing to donate the money rather than request a refund,” he says. “[…] I just want to say for the record that I think that we have the best audience and the best support system of any theatre in Long Beach. We feel like we have a personal relationship with everyone who walks through our door. We may not have the wealthiest audience, but in the past when we have run into trouble, our subscribers and donors have always stepped up and helped pull us up out of the ditch. I have no doubt that somehow, someway we will make it through this ― but it will require help. We are always happy to accept donations ― no donation is too small. We are a 501(c)3, so [donations] are 100% tax-deductible, and every dime goes into the theatre.”

Maybe the biggest fish around is Musical Theatre West, which each year typically stages five big-budget productions ― as in roughly $600K a pop. But although a whale shark like Musical Theatre West has deeper pockets than a minnow, the shutdown will not have to last all that long for this nonprofit to find itself in financial difficulty even though they don’t carry the overhead on the lavish Carpenter Center (which they rent per performance). For example, while they have rescheduled Mame (originally slated to open March 27) for August, should the COVID-19 crisis extend through summer, Musical Theatre West will lose not just the ticket sales from both Mame and Treasure Island (July 10–26), but they’ll be out the $50,000 to $70,000 they’ve already put into the former, plus refunds for ticket sales, 55 percent of which are season subscribers, with nonsubscribers having already snapped up an additional 11 percent of the seats for Mame.

“Because we could reschedule [Mame], the damage was not as bad,” says Executive Director Paul Garman. “But if we have to cancel the show, that will be a major problem.”

Garman highlights how difficult cancellations will be for the people who do the work to bring the shows to life.

“The reality for the [actors and crew] who live paycheck to paycheck is that this is definitely going to hurt them, because they won’t be paid until the show actually happens,” he says, noting that a show like Mame contract over 50 people, plus 14 Carpenter Center employees (ushers, etc.) paid hourly wage for each performance. “Most theatre people live hand-to-mouth, so closing down […] is especially detrimental to them because they can’t go out and find other [theatre] work, since there are no other theaters open. Many [theatre people] work as waiters or waitresses or bartenders, that type of stuff ― but they can’t really do that, because those are closed.”

Dean presumably speaks not just for Little Fish but for the Garage and every theatre company around when she says, “Even though we are each sheltering in place, we’re not taking this lying down. We’ll fight to the last gasp. […] The future […] hinges on two things: a public outpouring of contributions, and the length of time we’re closed.”

Garman voices the obvious conundrum here: “With people losing money in the stock market and being off work, are they going to be willing to donate to nonprofits like [us]?”

There’s only one way to find out. And find out we will.

To donate to any or all of the theatre companies kind enough to open up about their current difficulties for this article, visit: