Flix and Chill While on Lockdo... 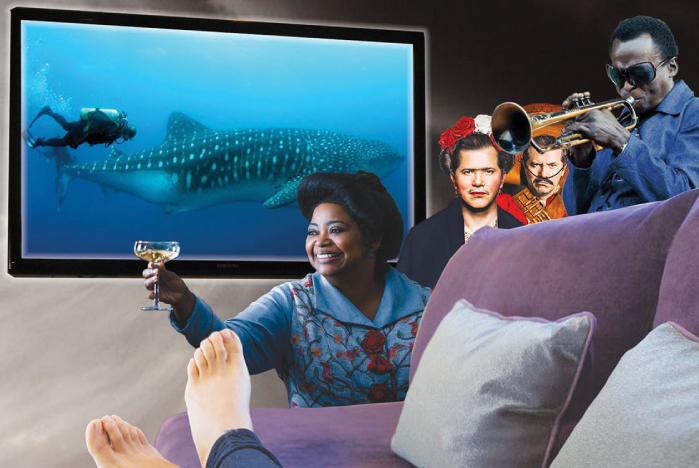 Flix and Chill While on Lockdown

Many of us are familiar with the cheap alternative to date night called “Netflix and Chill.” Some of us place more emphasis on the chill than Netflix. But in this period of COVID-19 public gathering restrictions, “Netflix” and “chill” have taken on whole new meanings.

While we are all safer at home we have plenty of time to chill, so the Random Lengths News editorial staff pulled together a list of shows, films and documentaries of note to which you should pay attention. This list includes the films and shows that are informative, inspirational and or downright funny. But perhaps more than anything else, these options can help you spend time to take in a deeper understanding of the world we live in.

Self Made: Inspired by the life of Madame C.J. Walker

A comedy-drama series centered on three cousins who band together to keep their grandfather’s popular Boyle Heights taco shop in business, Gentefied chronicles the family’s story as the old neighborhood becomes gentrified. In the first season, the cousins confront their differences in their connections to their community, their heritage and their commitment to the family business, all

while navigating larger themes of gentrification and the marginalization of Latinx’s in America.

This in-depth docu-series on Netflix revisits questions about the official story of the February 1965 assassination of Malcolm X — positing that his killer freely walked the streets in Newark, New Jersey — an assertion first made in Manning Marable’s biography on the black liberation leader.

At the center of the series is Abdur-Rahman Muhammad, a Washington, D.C. historian and expert on Malcolm X working with Marable in 2005 on the Pulitzer Prize-winning book Malcolm X, A Life of Reinvention. Marable died in 2011.

“There were so many stones left unturned,” Muhammad says in the new docu-series, adding that he was never able to look at the original crime scene evidence or files of the district attorney at the time. “And it just kept bugging me and bugging me.”

Ava DuVernay’s documentary film, 13th, explores the “intersection of race, justice and mass incarceration in the United States. The film is titled after the 13th Amendment to the United States Constitution, adopted in 1865, which abolished slavery throughout the United States” and ended involuntary servitude except as a punishment for conviction of a crime.

The documentary makes the case that slavery has been perpetuated since the end of the American Civil War through criminalizing behavior and enabling police to arrest and force poor freeman to work for the state under convict leasing. Duvernay examines the prison-industrial complex and the emerging detention-industrial complex, discussing how much money is being made by corporations from such incarcerations.

When They See Us

Another Ava DuVernay film, this one is a drama series on Netflix inspired by the story of the Central Park Five. Based on events of the 1989 Central Park jogger case, the series explores the lives and families of the five male suspects who were falsely accused then prosecuted on charges related to the rape and assault of a woman in Central Park, New York City.

Miles Davis: The Birth of the Cool

In this funny and provocative Netflix series, rapper and activist Killer Mike puts his revolutionary ideas about achieving social change into action. In each episode of this six-episode series, Killer Mike conducts a different social experiment, including only spending money in the black community for three days, helping the Crips (a national federation of street gangs that identify as Crips) cash in on its personal brand by launching a line of soda and rethinking public school’s approach to education. Killer Mike puts forward powerful, controversial ideas to help reshape perception in America.

This 2009 documentary covers the vital relationship that the oceans play in the overall health of the planet. Nature has the power and potential to move us to tears, this film is no different.

This Netflix original series tells stories of corporate corruption, securities fraud and creative accounting. All six one-hour long episodes began streaming on Netflix on Jan. 26, 2018. The show’s executive producers include Oscar-winning documentary filmmaker Alex Gibney. Each episode focuses on one example of corporate corruption and includes interviews with key players in each story. A second season of the show premiered March 11.

Homecoming: A Film by Beyoncé

A behind-the-scenes look at Beyoncé’s 2018 Coachella performance, which was written, directed and executive produced by Beyoncé herself. This is an intimate, in-depth look at the celebrated performance that pays homage to America’s historically black colleges and universities. Interspersed with candid footage and interviews detailing the preparation and powerful intent behind her vision, Homecoming reveals the emotional road from creative concept to cultural movement.

This film examines the career of Nina Simone, the acclaimed singer, songwriter and activist whose tumultuous life influenced her fierce and dynamic artistry — but, at times, proved too intense for Simone herself. Praised for its archival, never-before-seen footage, the film also gives Simone her due as an activist for civil rights.

Get Me Roger Stone

A close-up look at the right-wing tormenter who helped shape the 2016 presidential election.

Before he was indicted in the Mueller probe, Roger Stone had a long career as a right-wing dirty trickster, dating back to his work with Richard Nixon. The film chronicles the transformation of American conservatism throughout the years since the arrival of Stone’s generation.

Rousing and brave, in this award-winning 2018 short film, a group of women in India fight the stigma against menstruation and champion the making of low-cost sanitary pads. For generations, these women had no access to pads, leading to health problems and girls missing school or dropping out entirely. When a sanitary pad machine is installed in the village, the women learn to manufacture and market their own pads, empowering the women of their community.

When documentary filmmaker Brian Knappenberger began work on Nobody Speak: Trials of a Free Press, few people really believed that Donald Trump would become president. The film explores how the role of journalism has grown increasingly more relevant under a Trump presidency.