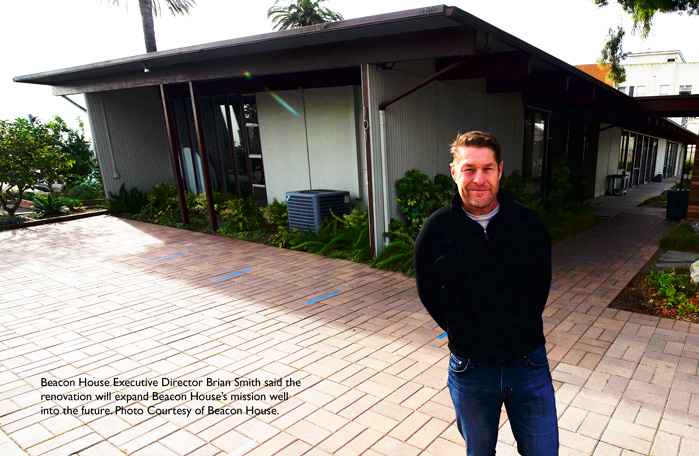 The Beacon House, which has become a Harbor Area icon during a half-century of treating alcoholic and drug-addicted adult men with a long-term, structured residential program, has just raised $1.156 million in donations and grants for renovation of its Bartlett Center.

Beacon House Executive Director Brian Smith explained that the money translates into an investment in the future of the organization’s mission, which began in 1970 in a two-story building with 18 residents and now consists of six residential facilities and room for 115 residents. Renovation of the Bartlett Center will expand Beacon House’s inpatient capacity by 96 men, increase the number of outpatients and broaden career and workforce training.

The $1.156 million boost was made possible by several key supporters of Beacon House, among them Athens Services, Supervisor Janice Hahn’s office, SA Recycling, Swette Family Foundation and McMillen Family Foundation. Smith believes that the motivation for many donors was homelessness in the Harbor Area, a problem that Beacon House doesn’t address specifically, but often solves as a by-product of its other services.

Just blocks from Beacon House, The Bartlett Center on 11th Street is named after Father Art Bartlett, co-founder of The Beacon House Association. Built in 1930, its two buildings house the Sandy Barnett Kitchen and Dining Facility, administrative offices and many events like the Beacon House dances.

Smith explained how the funds will be used to renovate the Bartlett Center to a multi-use event center. But the core of the organization is drug and alcohol treatment. He has a good idea why people have responded in a big way to their call for help now. 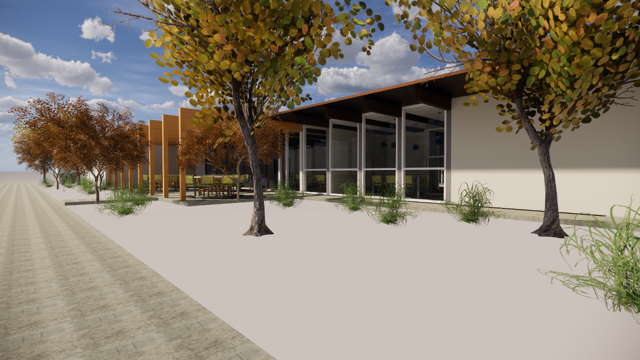 Rendering of the Bartlett Center renovation, as seen from Beacon Street.

He cited the desire to contribute to one more solution to homelessness as the reason for the large donation.

“There is a big frustration with people not being able to affect the homeless situation and secondly, the drug situation,” Smith said. “People feel when they help us, they can see that they actually affect the situation. They aren’t dependent upon an outside agency to then set up a program.”

In Smith’s words, the Beacon House is a direct connection to help solve a big problem. He said donors find it appealing to contribute to a person deeply motivated to turn his life around and become a contributing member of society. It’s a chance to make a difference with a serious problem in Los Angeles and see tangible evidence that it’s working.

Smith said the big difference between what they do and what many other agencies do is there’s a lot less handoff.

“If you take a homeless guy and bounce him from program to program, the risk of falling out of one of those programs is greater than if you can shepherd them all the way through,”  Smith said. “That’s a lot of work. It’s really a three-year project.”

“[The men] don’t have an address or an email address; many don’t have a driver’s license. That takes 4 months. You need that to apply for a job. If they have a DUI they have to clear that. They have to rebuild their lives from scratch.”

Beacon House will host mixers and networking events for professionals at the Bartlett Center  and create a nexus for their men to tap into for mentoring, internships and jobs. This will expand their involvement in both the Alcoholics Anonymous and the professional community.

As Beacon House treats more people and broadens their services in the community, this will stimulate the nonprofit’s workforce development. Beacon House residents will then generate income from those treatment services through logistics, inventory and customer service job tracks along with their culinary program for the men they help.

With the renovation of the Bartlett Center, the Beacon House projects significant cost savings of $100,000 per year from their food recovery program. The Beacon House has a large food budget due to the organization’s food services to outside organizations and its own internal operations.

In addition to feeding their residents three times a day plus other agency people, they also feed the 40 residents of the new county homeless shelter on 8th Street. Beacon House works with Athens Trash, Food Forward and other partners to repurpose food that would otherwise be thrown away. They will pick up food donations, document the amount by weight and sort viable food from unviable food and repurpose the viable food into finished products.

“So, it may be a case of apples that we turn into applesauce, or it may be that we find another treatment center or sober living that needs the viable food directly and we send it to them,” Smith said.

Smith said the act of  repurposing food is a big logistic issue too. They have to schedule trucks, date the food and make sure temperatures are right. There’s a lot of regulation involved. Now, there’s a workforce development opportunity because many of their men go to the different port providers to carry out logistics and dispatch. It’s going to become part of their program to train men in these skills.

“It’s obviously a huge market for San Pedro with the port,” Smith said. “It’s exciting because we accomplish both workforce and development, we save money on food and help with the problem in LA, which is food waste.”

Smith expressed appreciation for the support the nonprofit has received from the offices of Councilman Joe Buscaino and Supervisor Janice Hahn.

“The representatives have a framework that they work with and there is only so much they can do,” he said. “They have a bigger, harder picture than Beacon House does. We work with both offices regularly and we feel supported by them.”

Smith said they are humbled and grateful that their partners are interested in the work they do.

“We are looking forward to being able to grow with the port redevelopment and continue to upgrade our buildings as San Pedro moves through the massive changes that are planned for our community,” Smith said.

In the meantime, the Beacon House is on lockdown due to the coronavirus. None of the residents can leave the house and there is uncertainty about how the self-quarantining will impact operations and residents. Further, Beacon House is working on how to continue their food recovery safely. It looks possible but they must first ensure the proper food handling requirements are in place.

All projects have been canceled and residents are given very limited access to the outside world.

“It’s a big deal,” Smith said. “Drug addicts and homeless people have [greater] exposure to this. Their immune systems are not as robust so it’s easier for them to catch this virus. It’s a big concern and their safety is number 1.”