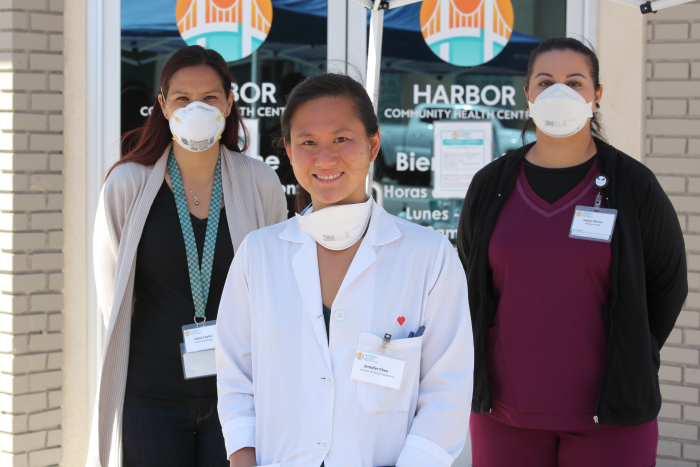 San Pedro clinic is the first line of defense

These days, when patients walk through the doors of  any of the three Harbor Community Health Centers they must undergo a temperature screening and answer several questions about their recent health and travel. They are asked if they have had a fever or cold symptoms, or if they have travelled or been in contact with anyone who was infected. This is a procedure that probably should be in place at any clinic, airport or port of entry. To date there have only been 10 confirmed cases of novel coronavirus in San Pedro and just one death.

Once known as the Harbor Free Clinic, the HCHC now has three offices, including one that recently opened at 425 S. Pacific Avenue in San Pedro. It has immediately answered the call to screen for COVID-19.

“If someone calls in and says I have a cough, I have a fever, what we’re trying to do is meet them in the car,” said Tamra King, CEO of the local community health centers. “That can act as a further barrier.”

The staff will do as much as it can outside the building, but if necessary, patients will be brought into an isolation room with a mask on,” said Jennifer Chen, a nurse practitioner and director of clinical operations at the Harbor Community Health Centers. Anyone who sees the patient will wear full-protective gear, including goggles, a mask, gloves and a gown.

The Harbor Community Health Centers are taking extra precautions to prevent the spread of COVID-19, but so far, they have not treated anyone infected with the virus.

The centers initially only had 10 kits for testing for the virus.  As of March 26, three people have been tested­— all results negative — leaving seven kits in stock.

The centers are not administering the tests unless the patient is displaying prominent symptoms.

“We’re just trying to be very judicious with who we test,” King said.

Because the health centers receive more than 100 patients a day, King said an individual’s symptoms  must be acute to be administered one of the seven remaining testing kits. The main reason there are so few testing kits is because so few have been produced.

“We’re mostly reserving testing for anyone that has risk factors such as travel or exposure, or if we just have a really strong clinical suspicion based [on] their symptoms that we should test them for it,” Chen said.

The centers also reserve the testing kits for patients whose care would be different if they tested positive for COVID-19, under public health guidelines.

“If someone has mild symptoms and they test positive for coronavirus, it won’t necessarily change our treatment plan,” Chen said. “Whereas if someone’s, you know, in the hospital with more severe symptoms it could potentially change their treatment plan.”

Chen said they want to identify which patients can be safely treated at home, as opposed to the patients that need to be sent to the emergency room for intensive monitoring and treatment. Patients that are elderly or have multiple chronic illnesses will need to be monitored closely.

The results from the tests for COVID-19 take several days, King said. If a patient were to test positive for the virus, the staff would have him or her stay home and get rest and fluids. If the patient was experiencing trouble breathing, he or she should go to the hospital.

The staff is unsure when more testing kits might arrive, Chen said. Quest Diagnostics, a COVID-19 test kit provider, has not given a time frame for when they will be restocked.

Quest Diagnostics performs the results of 25,000 tests per day, according to their website.

Chen explained that the tests are administered nasally after checking a patient’s temperature. But most of the patients that come to the centers don’t go because of COVID-19, but because of other maladies such as the common flu.

King noted that the centers are running low on other supplies as well, including flu swabs. The symptoms for the flu are very similar to COVID-19.

“If you have the flu then you pretty much don’t have COVID-19, so we can rule that out,” King said.

This has been a terrible season for the flu, but they have a vaccine for it. No such treatment exists for COVID-19.

The centers are also running out of personal protective equipment (PPE), which is used to prevent staff from catching the virus, King said. Near the end of March, they received more masks from Direct Relief and the Community Clinic Association of Los Angeles County. However, they are running out of hand sanitizer and soap, so they are in the process of acquiring more.

The staff has been trying to use their usual channels to get more supplies, as well as any other connection they can. King has driven to different hardware stores in San Pedro and Long Beach to buy things individually, as have other members of the staff.

“It’s kind of a shocking situation, the lack of equipment that we have, the lack of testing, the lack of support from the federal government,” King said. “But all of our city, state and county representatives have been amazing.”

King also expressed appreciation for the work Rep. Nanette Barragán has done to alleviate the shortage, but acknowledged there was only so much the representative could do.

King reported that the San Pedro Health Centers received additional federal funding totaling $50,000 on March 24 to be distributed amongst their three sites including the clinic on 5th Street and Pacific Ave., the Grand and 6th Streets site and the small clinic at the county’s new homeless shelter on 8th and Beacon streets across from the San Pedro post office.

The clinic at the homeless shelter is open intermittently based on what the residents need. They see patients there about one day a week. They’ll do an initial health assessment, including a physical and do bloodwork and figure out what medication they need.

The Los Angeles County shelter opened on March 2 and within a month was at capacity with all 40 beds filled.  The clinic started operating in the basement shortly afterward, but it flooded during the weekend of March 21 and 22. There have not been any cases of COVID-19 at the shelter.

“We’ve been temperature screening and monitoring all of them for any symptoms,” Chen said. “We’ve also advised them to kind of shelter in place and not try to go out for any unnecessary errands.”

Chen is the only member of the staff who is still going to the homeless shelter, but other staff at the shelter have not been reduced, said Ivan Sulic, field deputy LA. County Supervisor for Janice Hahn. The staff is taking extra precautions recommended by the Los Angeles Homeless Services Authority, including social distancing.

Clinical staff at the centers has been reduced by about 20 percent, Chen said. At the site on Grand and 6th Street there are four providers seeing patients, as well as six medical assistants, two licensed vocational nurses and five front office personnel. They also have a behavioral health team, which includes a psychologist and two social workers. For the pediatric branch at 5th Street and Pacific Ave, there is still a pediatrician and one OB-GYN physician, as well as three medical assistants and three front office staff.

The staff has been conducting telephone visits with patients to keep them at home as much as possible, Chen said.

“Between the telephone visits and having people not physically come into the clinics, it’s about the same workload [as before the outbreak], we just changed the type of work we’re doing,” Chen said.