As the Coronavirus Spreads, St... 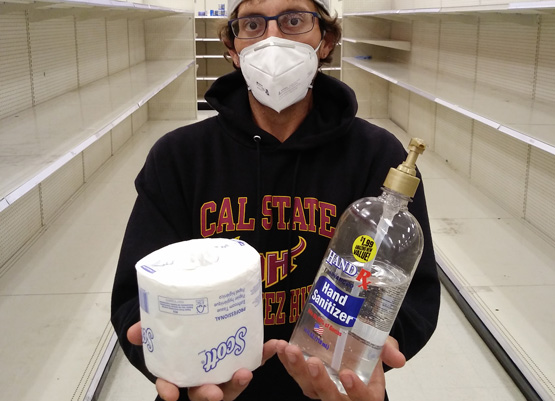 As the Coronavirus Spreads, Stay Calm and Carry On

For those who place as much significance in lucky charms and bad omens as they do the god to which they pray, the week of March 9 began with a full moon and ended on Friday the 13th. In between those days, panicked people led a run on bottled water, toiletries, generic face masks and hand sanitizers, leaving shelves bare in some sections of stores while the same stores remained fully stocked with fruits, vegetables, sodas and liquor.

Meanwhile, sold-out shows in major concert venues were cancelled, as the National Basketball Association, which was geared up for the stretch run of the regular season, instead suspended operations for at least 30 days. With two weeks remaining in spring training, Major League Baseball indefinitely postponed opening day. The National Hockey League’s battle for the Stanley Cup? Delayed. The dramatic elimination tournament known as March Madness that eventually leaves one team standing as the National Collegiate Athletic Association basketball champion? Canceled. For the next month or so, any event which brings together large numbers of people for a good time? Forget about it.

Suddenly, everything is about the coronavirus, aka COVID-19, which during that same week was officially designated an international pandemic by the World Health Organization. Meanwhile, a scarcity of testing kits in the United States has left government and medical authorities to guess about the number of infected people and the size of the problem they are facing.

The discovery that the incubation period for the virus may be twice the 14-day quarantine period that’s been applied elsewhere in the world has heightened concerns about the spread of the virus and the actual number of people that are infected and have become carriers.

Seasonal strains of flu have a fatality rate 40 times greater than the coronavirus. Even the health system in the United States can be overwhelmed by the flu, let alone the impact in less developed countries. As of Feb. 24, at least 29 million people in the U.S. have caught the flu and so far some 16,000 have died. A few thousand perhaps have been infected by the coronavirus with under two dozen deaths.

Impact at the ports

According to the Pacific Maritime Association, with less cargo, fewer truck drivers are working as well. However, strong contracts prevent layoffs among 8,600 full-time workers who are being paid for 40 hours, regardless of the drop in shifts. The slowdown is dramatically affecting 3,500 “casuals” or part-time dockworkers.

Thousands of small businesses depend on the ports, from freight forwarders and warehouse workers to truckers who have also been impacted. Farm produce, whether it be meat, poultry, vegetables or hay, is stuck in refrigerated warehouses or trucks with no place to go.

Daily domestic and international flights from China have fallen from more than 15,000 to just above 2,000 due to quarantine restrictions, putting Chinese airlines and Asia-Pacific carriers under mounting pressure. The massive reduction in Chinese travelers, who account for about one fifth of all tourism spending worldwide, is having an impact across the board. This dramatically impacts tourism in the greater Los Angeles area.

Officials from the World Health Organization sounded a warning about the rapid spread in disease clusters in South Korea and Iran. Authorities in Tehran, like Chinese authorities before them, tried to hide the extent of the outbreak, denying reports that 50 people had died in Qom. Finally, they had to admit the reports were true. Iraj Harirchi, Iran’s deputy health minister, downplayed the outbreak, saying “quarantines belong to the Stone Age.” He has since contracted the disease.

The largest concentration of the outbreak has been among almost 4,000 passengers and crew confined to a cruise ship docked at Yokohama, Japan. Crowded together in close quarters on a vessel with no medical protection, more than 600 people have been infected so far and two have died. Other cruise ships have remained offshore. The Department of Health and Human Services said American passengers of the Grand Princess will be taken to military bases in California, Texas and Georgia to be tested for the COVID-19 virus and for a 14-day quarantine.

Back home, statewide emergencies have been called, campuses have been shut down, conferences canceled, school trips postponed and most international travel has been completely eliminated. Cruise ships in and out of POLA and Long Beach are no exception. Panorama passengers were forced to spend an extra day holed up on the ship while one traveler was taken to a Long Beach hospital and tested for the virus. On March 7 at the Port of Los Angeles, Princess Cruises canceled a cruise by the Royal Princess after the Centers for Disease Control and Prevention issued a “no-sail order.” And all cruise lines for POLA have suspended operations.

This unpredictable epidemic is part of the deepening social disaster that is creating a mounting toll on working people.

The Cuban internationalist mission in West Africa in 2014-2015 — Cuba “army of white coats” — that helped stem the spread of the Ebola virus, points to what could be done by marshaling the voluntary efforts, self-discipline and creativity of millions to halt the march of this new disease. This example is brought to life in the Pathfinder Press book, Red Zone: Cuba and the Battle Against Ebola in West Africa: “And that’s what they did in the Ebola clinics — providing intravenous drips for rehydration, bathing and dressing patients, and assisting them with drinking and eating, without violating any safety procedures. They treated patients as fellow human beings, winning their confidence and that of their families.” The Cubans’ approach sharply lowered fatality rates. By mid-2015 the outbreak was virtually eradicated.

The National Nurses United, petitioned the U.S. Occupational Safety and Health Administration to adopt an emergency temporary standard to protect health care workers, patients and the public. Currently, no enforceable OSHA infectious diseases standard exists nationally. They said the CDC is weakening its current guidance, including recommending surgical masks instead of respirators for nurses providing care to patients with COVID-19 and opposed these changes.

“Nurses are confident we can care for COVID-19 patients, and even help stop the spread of this virus, if we are given the protections and resources we need to do our jobs,” said Bonnie Castillo, a registered nurse and executive director of NNU and the California Nurses Association. “This is not the time to relax our approach or weaken existing state or federal regulations. This is the time to step up all of our efforts.”

While a survey of nurses and protocols is ongoing, results of responses from more than 6,500 nurses in 48 states show that high percentages of hospitals do not have plans, isolation procedures or policies in place for COVID-19; that communication to staff by employers is poor or nonexistent, that hospitals are lacking sufficient stocks of personal protective equipment or are not making current stocks available to staff and have not provided training and practice to staff on how to properly use the equipment.

Medical systems in the U.S., Europe and most of the semi-colonial world are run for profit. They increase the deadly risks—and danger to humanity—from this highly contagious disease. Coronavirus, like meningitis, malaria, measles and smallpox, is a disease that preys on the poor and elderly.

Doctors at a hospital in Downey, who declined to be identified due to fears of repercussions, said they cannot get enough people tested, including those who have been exposed to the virus.

In an Oakland press conference, a statement read by Deborah Burger, the president of the NNU, quoted a nurse saying, “They would not test me because [they said] if I were wearing the recommended protective equipment, then I wouldn’t have the coronavirus. What kind of science-based answer is that? I’m a registered nurse and I need to know if I’m positive before going back to care for patients.”

Because COVID-19 is a new virus to humans, no one is immune. In the event of mass infection, hospital quarantine facilities would rapidly become overwhelmed and ventilators and oxygen essential for those with the severe pneumonia this coronavirus can cause would rapidly run short, except for the very rich.

The bottom line is that self-imposed and forced quarantines are an effective way of slowing down the spread of the virus. The measures China took to isolate the virus have been called draconian, but they were effective in reducing outbreaks there. But quarantines must be humane with everyone receiving medical treatment, adequate food and living conditions.