From Honduras to America-The B... 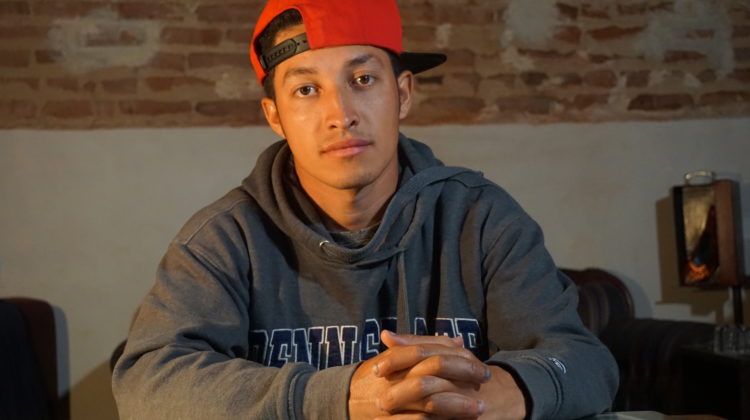 From Honduras to America-The Beginning of the Story

Miguel Angel Girón Martínez kept his story relatively brief during the panel discussion, but a few weeks prior, he gave a more detailed interview to Random Lengths News.

Girón Martínez turned 24 this past February. He was born in Tegucigalpa, the capital of Honduras. He was just one year away from entering La Fraternidad, the university, when he began actively organizing fellow students and young people to change his country.

The term “banana republic” was invented to describe political instability of a country with an economy dependent upon the exportation of a limited-resource product, such as bananas or minerals. Honduras has gold and silver mines extracted by multinational corporations and the bananas that were grown and harvested by the American company United Fruit were absorbed by other multinational corporations.

For more than 150 years, whole nations in Central and South America have served as control experiments for neocolonial and neoliberal economic policies, ruled over by foreign multinational corporations. These corporations include extractive companies such as the Rosario Mining Co., Bonanza Group of Mines, the Eden Mining Co. and the United Fruit Co. — companies chartered in the United States. These extractive industries have transformed entire mountains and clear cut entire forests. These industries also expanded and solidified wealth inequality while restricting social mobility. In many countries, joining the military is one of the means for people to lift themselves out of poverty. Arguably, joining the military was no guarantee of a better life in Honduras.

These circumstances led to the rise of organizers like Berta Cáceres, a Honduran environmental activist, indigenous leader and co-founder and coordinator of Consejo Cívico de Organizaciones Populares e Indígenas Honduras, or COPINH. Cáceres was assassinated in 2016 following years of threats against her life. A former soldier with the U.S.-trained special forces units of the Honduran military asserted that Caceres’ name was on their hit list months before her assassination. Her murder was linked to elite military troops trained by the United States at Fort Benning, Ga. — the former School of the Americas. This training school has since been renamed the Western Hemisphere Institute for Security Cooperation or WHINSEC.

Twelve environmental activists were killed in Honduras in 2014, according to research by Global Witness, making it the most dangerous country in the world, relative to its size, for activists protecting forests and rivers. Global Witness is a non-governmental organization that investigates and lobbies governments to prevent resource-related conflict and corruption, and associated environmental and human rights abuses. Caceres’ murder was followed by those of two more activists within the same month.

“In my country, I was a student leader and a leader in the socialist political party, ‘Libre,’” Girón Martínez said. “I am also an environmental activist.”

Girón Martínez’s persecution began in 2016. He went into hiding in 2017 and stayed out of sight for a one-and-a-half years. Eight different human rights organizations were helping him at one point.

Girón Martínez came from a political family. He described their politics as pretty conservative. They are a middle class family of ranchers, he said. And his dad was a high ranking sergeant in the Honduras military. He was killed when Girón Martínez was about 13 years old.

His father trained at the Palmerola military base outside of Comayagua, Honduras to participate in his country’s death squads in the early 1990s and quit in 2000. In 2011, he was killed by the military. Girón Martínez explained that his father didn’t want to continue obeying his superior officers orders to kill civilians. Instead, he went into business as a rancher and dug deeply into his faith as a Christian.

“I was young at the time but I was aware of the stories of corruption and the raiding of the government coffers and the repression,” Girón Martínez said. “There’s so much corruption in Honduras. … So many deaths of young people, deaths of journalists who tried to expose the truth and environmentalists were being killed. So, it’s for that reason I became politicized.”

Girón Martínez joined the student-led organization, Movimiento Estudiantil Universitario, because he saw how government resources were poured into weapons and the military while Honduran schools were falling apart. The student leader recounted his work as an organizer securing money to paint his school and get school supplies. In 2011, the Libre party was formed and Girón Martínez joined in 2012.

“Because I had been in Libre for such a long time, I became one of the better known student organizers in Tegucigalpa,” Girón Martínez said.

He explained that his ability to organize young people and get them out into the streets in protest is what made him a sought after organizer by both the student activist groups and the death squads.

“The rich don’t want food placed on the plate of the poor,” Girón Martínez  said. “[Manuel Zelaya Rosales] was the first president to govern, in a long time, for poor people.”

Girón Martínez explained that the U.S. embassy frequently put out articles in the local newspaper expressing disagreement with Zelaya Rosales’ policies. When Zelaya Rosales raised the minimum wage the right-wing press attacked him from all sides.

“Persecution is what forced me to leave my homeland,” Girón Martínez said. “Paramilitary death squads were looking for me.”

Please read From Honduras to American  ― The Beginning of the Story on March 19 in which Random Lengths News go into detail how why Miguel Angel Girón Martínez became an activist and the circumstance led him to go into hiding and eventually fleeing from his homeland.