Beyond the EPIC Campaign to En... 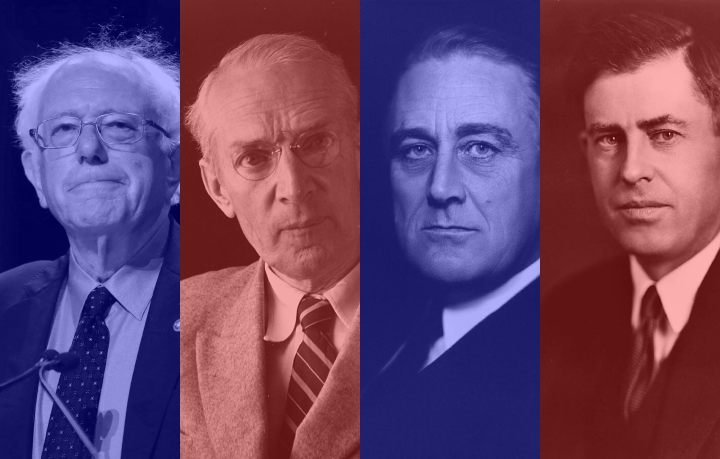 Beyond the EPIC Campaign to End Poverty

To some who don’t know 20th century history, the Green New Deal that Vermont Sen. Bernie Sanders is pitching might sound like a radical departure. It’s not.

In the middle of America’s Great Depression that started with the Wall Street crash of 1929, the Democrats elected a president who might be considered the first democratic socialist — Franklin Delano Roosevelt.  He was the nephew of President Theodore Roosevelt, the last progressive Republican to hold that office. The Great Depression was the worst economic downturn in the history of the industrialized world, lasting from 1929 to 1939. It began after the stock market crash of October 1929, which sent Wall Street into a panic and wiped out millions of investors.

However, it wasn’t Roosevelt, individually, who moved national opinion more to the left. Some would argue that it was none other than the famous  socialist writer Upton Sinclair, author of The Jungle, who led the way with his 1933 book I, Governor of California, and How I ended Poverty: A True Story of the Future.

At this time, Sinclair was one of the most popular and influential writers in the nation, and with millions of displaced farmers and unemployed workers the country was starving for solutions. Millions of migrants crossed the deserts from the Dust Bowl of the Midwest in caravans coming to California — the land of plenty. The Los Angeles Police Department was dispatched to the California border to stop the flow of unwanted migrants.

If any of this sounds vaguely familiar to recent events at our southern border, then the solutions might also. Although Sinclair’s plan, which he called  End Poverty In California or EPIC, started out as more of a social uprising with his eventual campaign to be governor, it was far more drastic than anything Sanders has yet proposed. It included the confiscation of idle factories and farmlands to have them run as worker co-ops. He did, however, call for a 30 percent tax on the wealthy and 4 percent tax on stock transfers, similar to what both Sanders and Sen. Elizabeth Warren, the other progressive running for president, are calling for. Taxing the wealthy is nothing new.

He also proposed government pensions for the elderly, disabled and widowed, which eventually became the basis for one of the most popular government programs under FDR—Social Security.  Republicans have been complaining about it ever since.

In the 1934 gubernatorial election, Sinclair switched from being a socialist to a Democrat. Several EPIC-supporting candidates won their primaries for California State Assembly and Senate seats that year. Like Sanders today, Sinclair did not receive full support from the party establishment and Roosevelt refused to endorse him. He saw the EPIC plan as too radical. Back then, as now, the Democratic Party refused to support this firebrand and two of California’s most influential figures in the media, William Randolph Hearst, of the San Francisco Chronicle and Harry Chandler of the Los Angeles Times, used their papers to slander Sinclair. Does this sound familiar?

However, even in defeat, Sinclair received twice as many votes as any previous Democratic candidate for governor in California. In addition, two dozen candidates running on the EPIC platform were elected to the state legislature, including Culbert Olson, who became governor four years later.

With the open support of FDR, Olson ran for governor of California in the 1938 general elections against the conservative Republican and anti-labor incumbent Gov. Frank Merriam. Merriam, known for suppressing the 1934 longshore strike and his conservative fiscal policies, was a highly unpopular candidate among progressives and unionists, even conservative Republicans opposed him for the 1935 tax reforms. Merriam lost soundly to Olson,  who was the first Democrat to win the governorship since 1895, breaking the 40-year Republican dynasty.

Two years later, when Roosevelt ran for an unprecedented third term, he chose as his running mate yet another progressive, Henry A. Wallace, who had proven himself to be an effective secretary of agriculture since 1933.  Wallace was the brains behind regulation of farm production and lifted stagnating commodity markets during the depression.

Later, after World War II, Wallace envisioned a postwar era governed by an international peacekeeping force and an international court, rather than through balance-of-power politics. His plan also called for an end to European imperialism in Asia and Africa. In an address to the Free World Association on May 8, 1942, Wallace outlined his “Century of the Common Man,” in which he endorsed federal support for education and collective health care for workers. Sound familiar?

These proposals would have required continuing the initiatives of the New Deal era that Wallace so admired, but by the end of the war the administration lacked sufficient political capital to promote an expanded program of domestic social welfare.

And yet here we are, 75 years after the end of the last Great War, still arguing over universal health care as if this were something new or strange to American politics, and it’s not. Clearly, like civil rights, women’s suffrage or any of a multitude of social issues the battles are multi-generational. Bernie Sanders is just the most recent in a very long line of social justice advocates to rise up from progressive roots of a very American tradition of protest.  If he sounds angry then perhaps it is born out of frustration for the decades long struggle to attain the Second Bill of Rights envisioned by FDR and the conditions that still call for change.