Janitors Take Fight to the Str... 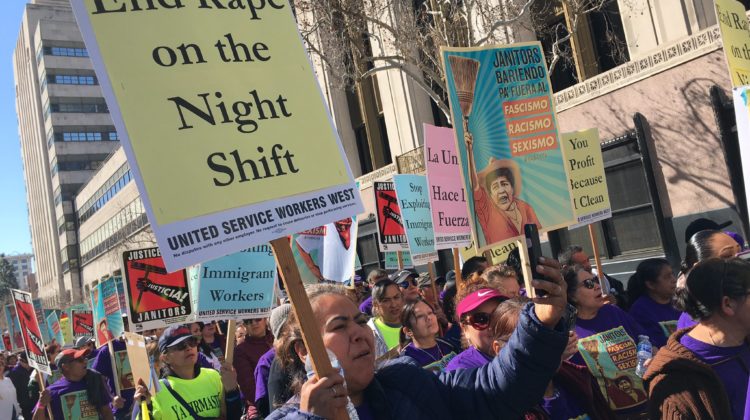 Janitors Take Fight to the Streets of Downtown LA

On Feb. 6, thousands of janitors took to the streets of Downtown Los Angeles demanding a New Deal for immigrant workers. The event marked the start of a contract campaign for 25,000 janitors across California represented by Service Employees International Union United Service Workers West. Janitors are calling on building owners and property management companies to do their part to clean up the industry by signing on to the Immigrant New Deal to end the exploitation of workers.
Marchers who gathered next to Los Angeles City Hall carried signs reading, “End Rape on the Night Shift” and “Stop Exploiting Immigrant Workers.” The effort to put protections against harassment into contract language comes more than three years after Gov. Jerry Brown signed into law protections for janitors against sexual harassment.

Massive demonstrations by the General Confederation of Workers and other unions in France continued against the assault on pensions by the government of President Emmanuel Macron. Hundreds of thousands have protested nationally over the past months.
Attempting to end the strikes and protests, Prime Minister Edouard Philippe sent a letter to the unions Jan. 11 saying the government was prepared to withdraw its plan to raise the retirement age for full pension benefits, “if certain conditions are met.” But workers don’t trust the government and Philippe’s pledge hasn’t stopped the protests. For rail workers — threatened by Macron to end their early retirement — it’s their longest strike in French history. Many passenger trains are not running, including most of the Paris Metro lines.
Public service workers in transportation, schools and public hospitals have organized mass rallies. More than a third of teachers in France didn’t report to work Jan. 9. The confederation also called for a blockade and strike at oil refineries.
The French working class has achieved a high standard of living with significant pension and retirement benefits due to the strength of the labor movement coming out of World War II. Their militant actions over the years have defended their standard of living in the face of ongoing government and corporate assaults, much the same way U.S. rulers have driven down wages and worsened working conditions and safety on the job.
Apple workers win ruling against exit search by management
The California Supreme Court decided that Apple Inc. must pay its workers for being searched before they leave retail stores.
In a class action suit filed against the tech giant, workers reported that they were required to submit to searches before leaving the stores and not compensated for that time which could be from 5 to 45 minutes. Apple has 52 retail stores in California and has required workers to submit to exit searches of their bags, packages, purses, backpacks, briefcases and personal Apple devices such as iPhones. Failure to comply can lead to termination.
Apple said that it could prohibit employees from bringing in any personal items. The California court said a rule of that type would be draconian and untenable. The ruling does not prohibit company searches, it just says that Apple must pay the workers for that time.