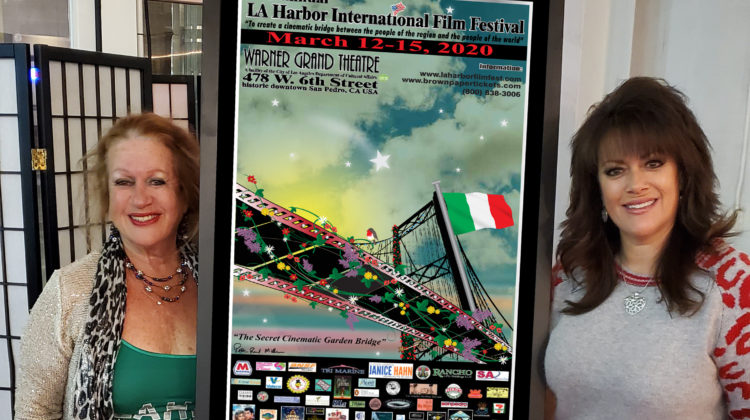 Spring is soon arriving and for the 17th year, the Los Angeles Harbor International Film Festival will kick it off with a slew of documentary films and their special Read the Book See the Movie program from March 12-15. The founder, Stephanie Mardesich, announced the festival at a press launch on Feb. 13 at Janny’s Space & Showroom at People’s Place in downtown San Pedro.

Over four days, LAHIFF will screen six films and returning for its eighth year, New Filmmakers LA shorts will feature 26 films on Los Angeles themes at the festival. All of the short films are timed at one to five minutes. The films will be featured at the Warner Grand Theatre.

LAHIFF is a non-competitive, non juried festival with movies chosen by research or referral. The festival will kick off on March 12 with Read the Book See the Movie program –a festival feature that promotes student literacy and film appreciation. The Port of Los Angeles’ traditional bag-piper and the Los Angeles County Sheriff’s mounted enforcement deputies will greet students arriving at the theater.

On the opening night on March 13, the Academy Award-winning Cinema Paradiso will screen at 7 p.m. The film is an homage to the recent naming of the Little Italy district in downtown San Pedro.

On March 14 NFMLA will screen the short films of the finalists in their annual community engagement program.

At 7 p.m. on that same date, LAHIFF will feature its Hollywood Nostalgia Tribute film, Grease (Grease is the Word). LAHIFF invited the Boys and Girls clubs of San Pedro and Wilmington, SouthBay Youth Club and I <3 Wilmington to attend the program and the marching bands at Dana Middle School and San Pedro High School to perform.

Closing day is Doc-Sunday which will feature the documentary short, On the Waterfront, which focuses on the renaissance of the Georgetown Waterfront National Harbor and architect Arthur Cotton Moore. The documentary explores the environmental approaches to waterfront development in the District of Columbia. The film is timely for this community with the new San Pedro Waterfront development scheduled to break ground in 2020.

The environmental feature for this year is Artifishal, a film with “immense visual and aesthetic appeal” that reveals the challenges ecologists and conservationists face in the lucrative salmon-hatchery industry. A Question and Answer panel discussion will follow the film.

The closing film on Doc-Sunday and the festival itself is the documentary, Say Amen Somebody, which was originally released in 1982. The film documents the American gospel music scene of that time, focusing on two of the movement’s pioneering forces, Thomas A. Dorsey and Willie May Ford Smith. The Los Angeles Chapter of Gospel Music America Workshop will perform before the film screening and participate in the traditional opening program in which members of the Veterans of Foreign Wars, Wilmington Post #2967 will present the national flag.