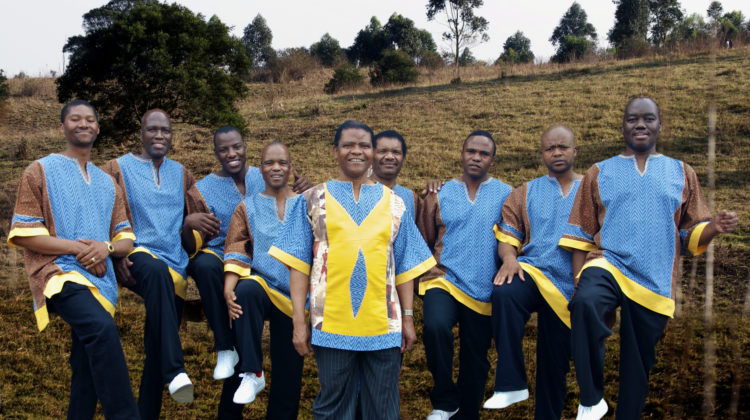 Editor’s note: Due to the passing of Joseph Shabalala the group’s performance date will be changed to March 19, so the company may attend the funeral in South Africa.

The death of Joseph Shabalala, retired founder of Ladysmith Black Mambazo on Feb. 11, occurred just as the choir was about to perform at Royce Hall. Shabalala died in a hospital in Pretoria with his wife by his side. He was 78. The South African songwriter brought Zulu music to listeners worldwide.

Ladysmith Black Mambazo came together in the early 1960s. The name, Ladysmith comes from his hometown, in the province of kwaZulu Natal, halfway between the city’s of Durban and Johannesburg. The word, Black, references the oxen, a strong farm animal. It was Shabalala’s way of honoring his early life on his family’s farm. Mambazo is the Zulu word for chopping axe, a symbol of the group’s vocal strength.

It is being with our friend & fans that we can live with this terrible pain in our lives. We are not canceling our concert tours. We will continue to celebrate the life of Joseph Shabalala, as we have done since he retired in 2014….

Through the 1970s and early 1980s Ladysmith Black Mambazo was the most successful singing group in South Africa. By the mid-1980s, musician Paul Simon visited South Africa and incorporated the group’s rich tenor, alto bass harmonies into his famous Graceland album. The landmark recording was groundbreaking in introducing world music to mainstream audiences.

A year later, Simon produced Ladysmith Black Mambazo’s first worldwide release, Shaka Zulu, which in 1988 garnered the group its first Grammy Award, for Best Folk Recording. The group has won three more Grammy Awards; Raise Your Spirit Higher (2004), Ilembe (2009) and Singing For Peace Around The World (2013) and 19 Grammy-Award nominations, more than any other world music group in the history of those awards.

Closer to home, Random Lengths News reached out to musicians and cultural influencers to get their thoughts about the particular impact Shabalala has had on them.

“The song Homeless completely bowled me over with its serenity and spiritual feeling. I saw them perform with Paul and at their own concert and have been loving their music ever since. My attorney contacted his management about recording with my band, One World on our first album, Spirits Beckon You. They were very interested but scheduling conflicts didn’t permit it. What a joy it would have been to sing with him! He took a part of my soul with him.”

Max Viltz, the owner of Village Treasures, is a promoter of the arts and music and is an influencer for African American culture in Long Beach. She said that she has always loved music and various genres including Ladysmith Black Mambazo.

“It has such beauty and flow of movement,” Viltz said. “They seem to flow through their performances. I think because of the Paul Simon influence that it has such crossover appeal that it reached so many people.”

Harold Greene, musician of multiple string and percussion instruments and furniture maker of San Pedro, said though he didn’t know of Joseph Shabalala he remembers seeing the group in person on their first U.S. tour with Paul Simon.

“The power of their voices was stunning as well as their unique dance style,” Greene said. “I believe Miriam Mekeba was also featured. It was a beautiful concert and the first time I’d heard African music live.”

On his website Paul Simon wrote the following, remembering Shabalala:

Joseph Shabalala took Ladysmith Black Mambazo and brought their music all over the world. Imagine! What a great accomplishment for a boy from Apartheid South Africa. I admired him for his music and his Godly spirit. People love Mambazo. I love Joseph. We had a great time.

A favorite of the late great Nelson Mandela, Ladysmith Black Mambazo traveled with the future South African president, at his request, when he went to Oslo, Norway in 1993, to receive the Nobel Peace Prize. One year later they were singing at the inauguration of the newly elected president. Mandela proclaimed the group South Africa’s Cultural Ambassadors to the World.

In 2014, Shabalala retired after more than 50 years of leading his group. Four of his sons perform in the current lineup and will carry the group into the future. The group sings of peace, of love and for people to live in harmony.